What is the low resistance design path in an aircraft to withstand a lightning strike?

I know in a building we have lightning rods that conduct a lightning strike into the earth, but for an aircarft there is no ground to 'ground' so I assume the lightning enters and passes through the aircraft. Therefore, since some areas must have high resistance paths of protection, for example a path through the antennas or main electronics bay, they must be an alternate low resistance path capable of conducting a very high power flow with minimum damage and burning. What is this design path?

Almost all aircraft have metal bodies, the electric current flows through the exterior metal.

Aircraft with composite hulls can have conducting material added to the composites to provide a path for lightning. This is typically a metal mesh.

Some smaller composite aircraft, lacking this sort of provision, simply cannot fly near clouds or anywhere where there is a risk of lightning. 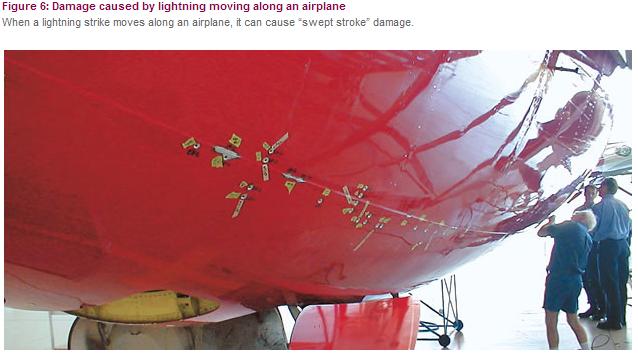 The outer conducting surface acts as a Faraday cage preventing the high voltages and currents from affecting the interior. 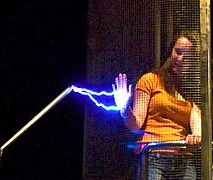 It is estimated that on average, each airplane in the U.S. commercial fleet is struck lightly by lightning more than once each year.

Initially, the lightning will attach to an extremity such as the nose or wing tip. The airplane then flies through the lightning flash, which reattaches itself to the fuselage at other locations while the airplane is in the electric "circuit" between the cloud regions of opposite polarity. The current will travel through the conductive exterior skin and structures of the aircraft and exit off some other extremity, such as the tail. Pilots occasionally report temporary flickering of lights or short-lived interference with instruments.

Every circuit and piece of equipment that is critical or essential to the safe flight and landing of an aircraft must be verified by the manufacturers to be protected against lightning in accordance with regulations set by the Federal Aviation Administration (FAA) or a similar authority in the country of the aircraft's origin.

From Scientific American - What happens when lightning strikes an airplane?

"It only gets really serious when the radome [nose cone] is struck, the only part of the plane's shell not made of metal, as this is where the radar is located. But nose cones have special lightning conductors for just this reason."

From The Guardian - Should you be worried about lightning striking your plane?

The 787 flight test team gathered the unexpected data last month after one of the Dreamliner test aircaft was struck by lightning. Unlike traditional aluminum aircraft where the entire aircraft is conductive, on a composite airplane the charge from a lightning strike would find its way to the conductive parts such as wiring or hinges. In order to avoid the risk of the charge damaging these kinds of parts, Boeing had to add conductive material to the composites in order to provide a pathway for lightning strikes.

1
What happens when lightning strikes an airplane?

40
What are the pros and cons of high-wing compared to low-wing design?
6
What regulatory load cases drive the structural design of aircraft?
20
Does the Predator drone's design make a tail strike more likely on takeoff and landing?
3
What aircraft design elements contribute the most to sustained flight?
3
Aircraft lightning: What are the requirements for airworthiness?
13
Do passengers notice if the aircraft is struck by lightning?
3
Can a lightning strike lead to structural damages of the fuselage and eventually cause decompression?
4
What changes are needed for a piston-prop aircraft to withstand saltwater environment?