Which of the following vectors is refered to as the Ground Speed?

The green one I expect is TAS, the blue one would be Vertical Rate 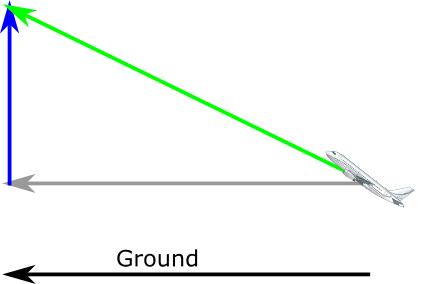 Note that for simplicity I did not draw them as geodetic curves, but the black one should be shorter than the gray one because of the earth's curvature.

Does the Ground Speed represent the horizontal speed relative to surface at the sea level?

Does the Earth's curvature affect the GS? As the length of the gray vector will be longer the higher the altitude is. Does that mean a plane flying at 1km will have higher GS than a plane flying the same total speed at 10km?

I'm simulating aircraft movement along a straight trajectory by constant speed. To simplify, the input is start coordinates & altitude and finish coords & alt.

That means the plane can ascend or descent during simulation. I know the total distance between A & B and distance at sea level. So first thing I tought of was:

In relation to image:

I know the length of Green line and I can calculate how long it will take the plane to reach the end. The time to finish is constant for each line & I know the length of the black line so using formula speed = distance / time I should be able to get the "Ground Speed".

Short answer: 1/ Yes, the ground speed is the speed on the aircraft trajectory projected at sea level. 2/ Sea level is not an ellipsoid of revolution, but a surface close to the geoid of reference. 3/ Using the geoid geometry is however not advisable. It's complex, requires an appropriate GIS library using a geoid (gravitational) model, needs more time for calculation. Sticking to the ellipsoid is usually a good alternative.

When simplified, your problem is not an aviation problem, only a geometry one.

As you said, you need two parameters: Distance and time and you have already one: Time to fly from A to B.

To compute length A'B' of the brown arc, just project A and B orthogonally onto the Earth surface using your 3D library functions and compute the curved distance.

Having now the length of the brown arc A'B' and the time flown, the ground speed is the ratio of the two.

Note: The circumference of a circle around Earth surface at kilometer above it is only 6.28 km (2π) longer than at Earth level, and each km of height adds only this same quantity. So at 10 km, the difference with sea level is (only) 63 km.

Ground speed equipment on-board aircraft measure the speed against the ground. Except in the case shown above where distance information is derived from a ground station (DME station).

Ground speed is not derived from true airspeed. When using GPS, or an inertial navigation system to measure the ground speed, it will be the speed across the ground. It is the rate of change of the latitude and longitude, so you don't need to include the curvature.

Once an aircraft (or crew) know the ground speed and TAS, the wind information is then known (how fast the mass of air the aircraft is in is moving).

True airspeed is the speed inside a mass of air. In a zoom climb in an F-15, TAS will be pointing almost the same direction as the [upward] nose of the F-15.

Vertical speed is how fast the plane is climbing/descending. It's measured by sensing the rate of change of the static air pressure.

This is not how airplanes fly in real life. But for the sake of your model, and if you don't have wind simulation, then the known green distance and the time it takes to move from A to B will do just fine to compute the ground speed.

Not the answer you're looking for? Browse other questions tagged groundspeed or ask your own question.

23
Which trigonometric algorithm does an FMS use to determine distance between waypoints?
16
What are CAS and EAS used for?

16
How is the actual ground speed of an airliner measured?
24
How did planes measure their speed relative to the ground before GPS?
6
How do pilots manage the speed during the approach?
9
How to calculate the real Ground Speed from True Air Speed?
1
What is the unit for ground speed reported by ADS-B?
1
What was the lowest ground speed landing?
0
What determines the maximum ground speed of hot air balloons?