What are fuel biases?

Airbus and Boeing seemed to have different terms for this, PERF Factor, Fuel factor. The seem to be close in definition but I'm not really sure.

fuel performance-calculation fms
Share
Improve this question
edited May 20 '17 at 2:07

Fuel bias is as you described it. As the engine ages, it burns more fuel than a brand new one.

The fuel flow (and drag) corrections are entered into the FMS. This would allow the FMS calculated quantity not to disagree with the tanks totalizer. The figures are based off previous flights and engine tests.

Maintenance personnel can refine the database by entering correction factors for drag and fuel flow. (737 manual)

There are also "biases" to consider, depending on the make and model of aircraft. For example with Gulfstream aircraft, our flight planning experts typically add a 16% bias for flights of less than three hours. However, biases depend on the age of the aircraft, how the operator flies it, planned flight level, and speed.

Boeing does not call it bias when I checked the 787/737 manuals, but 'bias' is likely a flight planning software term. 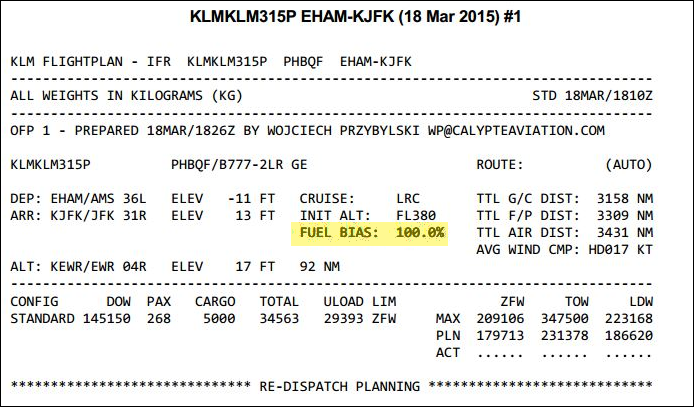 (Source) From a flight planner for a flight sim. 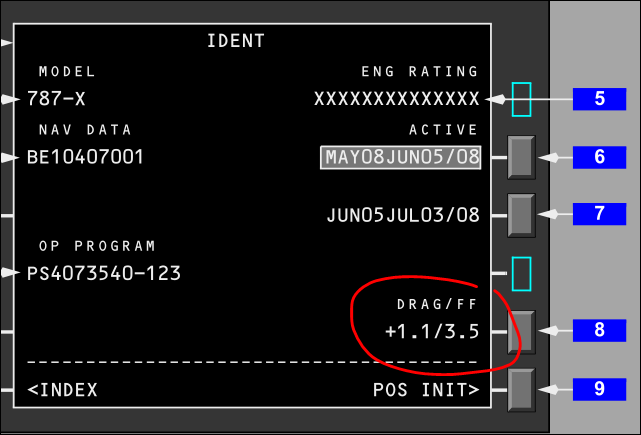 Boeing 787 FMS interface where the drag and fuel flow corrections are entered.

Not the answer you're looking for? Browse other questions tagged fuel performance-calculation fms or ask your own question.

3
Why does the thrust limit page display the thrust in percentage (« % ») and not in pound-force?

43
Why are we still putting lead in our fuel?
28
What are the ICAO fuel reserve requirements?
21
Are commercial pilots incentivized to reduce fuel consumption?
4
What were the effects of the oil crises on the Concorde ticket prices?
4
How do you calculate trip fuel based on hourly fuel burn rates?
2
Why are jet fuel prices very similar in North America and Europe, yet automotive fuel prices are very different?
6
Does one-engine cruise consume less fuel than two-engine cruise?
1
What is "company compensation fuel" and "pad fuel"?
3
What are some symptoms of a clogged fuel filter?