What is the function of the holes in splitter plates?

Do the holes in splitter plates reduce the boundary layer, or do they serve a different function such as acoustic/vibration damping?

Many splitter plates have a series of holes drilled into the surface closer to the engine side of the intake. Suction is applied to these holes, further reducing the boundary layer.

This bit is from Wikipedia, it's marked Citation Needed, and I'm unable to corroborate it. 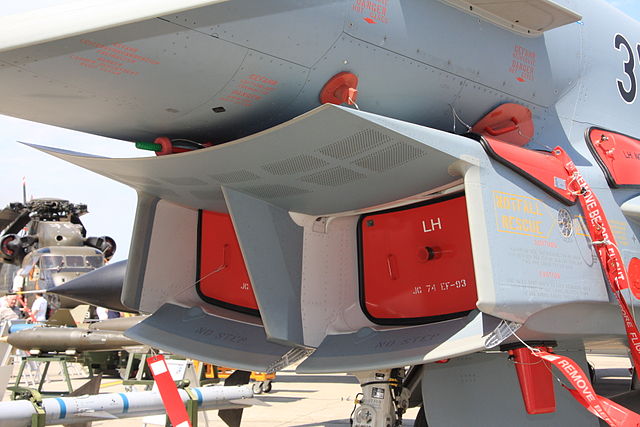 Do the holes in splitter plates reduce the boundary layer?

Yes. Suction is applied to remove the slow-moving layer of air close to the surface, so the air entering the intake has as uniform a speed distribution over the intake cross section as possible. That this air is used for cooling before being dumped overboard is sensible, but if cooling were the single purpose for sucking it in, then better and more efficient designs exist.

On some spike intakes the designers even implemented boundary layer suction on the intake cone, ducting the flow through struts in the intake to the outside of the engine. Even this complex arrangement seems to be worth it because it improves the efficiency of the intake and allows to widen its operating limits. From this article of the Airspacemag web site:

The SR-71 inlet rids itself of boundary layer air by sucking it in through slots on the spike and passing it through ducts that exit the nacelle.

The airflow schematics in the picture below call this particular flow "centerbody bleed". Note how it is reversed at low speed in order to suck more air into the engine while it is used to dump the boundary layer air as soon as intake pressure rises above ambient pressure at higher flight speeds. 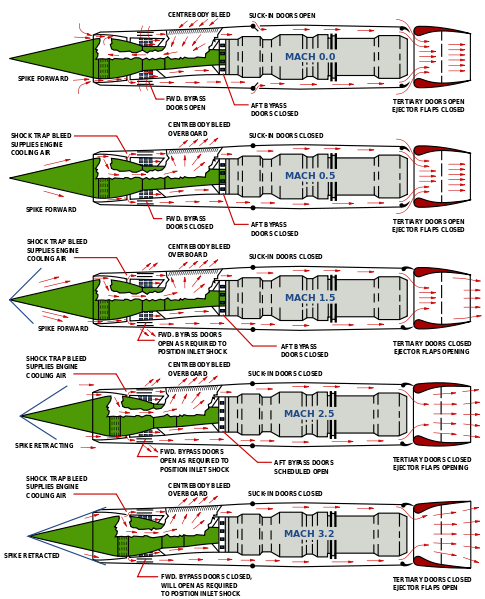 The ones in the F/A-18E are for fuel cooling. From the flight manual:

A fuel/air heat exchanger is located above each engine inlet, near the leading edge. When the heat exchanger bypass valve is open, the heat exchanger uses inlet air to provide additional fuel cooling. Air is drawn from the inlet through several banks of small pin holes (bleed plates) and is exhausted through the spoiler opening on the upper surface of the LEX/fuselage.

I couldn't find sources, but this doesn't mean that they are not used for boundary layer reduction too.

Suctioning the boundary layer to improve the homogeneity of inlet air and to cool down fuel seems like a good way to kill two birds with one stone.

Not the answer you're looking for? Browse other questions tagged aerodynamics supersonic inlet f-18 eurofighter-typhoon or ask your own question.

17
Why are the intakes of some fighters not attached to the fuselage?
16
What exactly are those openings in the bellies of many jetliners?
15
What are the merits of an inlet cone/spike/centerbody vs. a 2D inlet?
3
Why are the boundary layer suction holes placed far forward from the engine?
0
Are the holes inside the engine nacelle used for uniform intake of air?

15
What are the merits of an inlet cone/spike/centerbody vs. a 2D inlet?
7
What type of supersonic intake does the Dassault Rafale fighter jet have?
4
What is the function of variable inlet guide vanes in terms of pressure change?
28
What is this F-18 Hornet "air intake" for?
3
Why are the boundary layer suction holes placed far forward from the engine?
6
What is the purpose of the vertical splitter and the NACA duct at the MQ-9 Reaper engine scoop?
0
What are the holes on the top side of the canard of Eurofighter Typhoon for?
13
What are these small engine inlets on the Super Hornet?
2
Do the stabilators on the F/A-18 also have a roll function similar to the F-22?