Would it be beneficial for the Boeing 777x to have a biplane wing design?

The Boeing 777x has huge wings to generate lift even to the point of having to have a hinge and being able to bend them.

Would it not be advantageous to have 2 wings like a biplane or one behind another? And what disadvantages would there be?

This is from Wikipedia so possibly not reliable.

A major disadvantage to that design would be the aft wing had a disrupted airflow over it as it travels through the fwd wing's wake, so lift is greatly diminished.

As to doing a stacked biplane design typical of small sport biplanes in use over the years, this is probably frowned upon for two reasons:

A single cantilevered monoplane is by far the most efficient solution save only a flying wing, but these are not commonly used in commercial travel which has been discussed in previous threads.

Now that's not to say a biplane may not be useful for commercial aircraft. Researchers at MIT proposed a supersonic biplane design which usea the configuration to dramatically reduce its sonic boom. 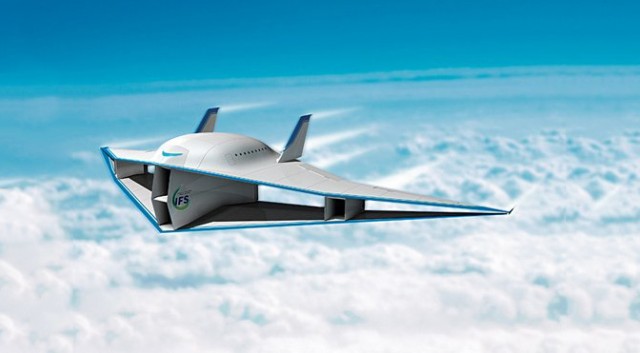 Whether this idea survives the CGI proposal and becomes actual hardware is another story; this business is full of concept aircraft and precious little flyable hardware.

The Boeing 777x has huge wings to generate lift

No, Boeing 777x has long wings to be efficient.

As the designers improve the aerodynamics to reduce the parasite drag, the optimal point¹ shifts to longer wing span as that decreases the induced drag, and increases parasite drag slightly so they are equal again.

So the B777x has the wing span that gives it optimal efficiency. No other wing shape would be able to provide that efficiency.

15
Can biplane or triplane designs be revived with modern materials?
27
Why are there no longer any biplanes?

3
What is the physical meaning of Mean Aerodynamic Chord?
2
why do wings have high aspect ratios on commercial airliners?
3
Why is an elliptical wing planform so aerodynamically efficient in layman's terms?
8
Lift distribution on biplanes
1
Would supersonic bi/tri/multiplane wings have less lift interference drag than a subsonic version?
1
Difference in lift generation for a swept wing and straight wing in subsonic condition
1
What justifies a biplane over a braced monoplane?
1
Aspect ratio of an elliptical wing
0
How to choose an attack angle?