As I am sitting on board my plane and have been informed that there may be a three-hour delay due to a pressure problem in the fuelling system at the destination, it seems like an appropriate moment to ask: how do these systems at large airports (in this case, Amsterdam Schiphol) work?

Apparently, it is an airport-wide problem affecting all flights that need refuelling.

To complement the other answers with pictures: 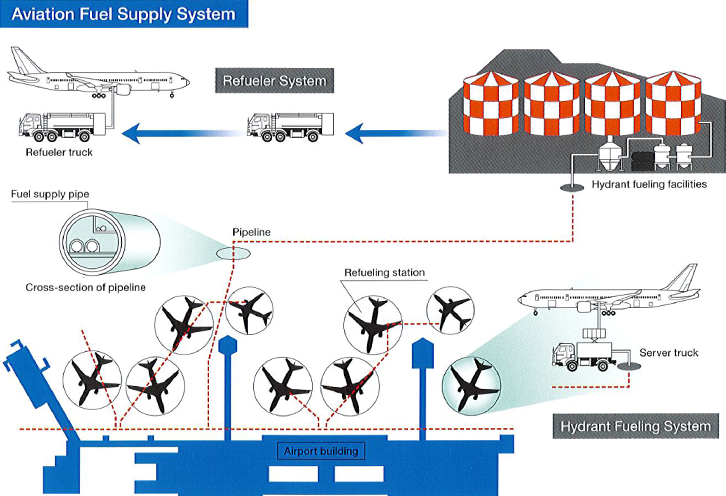 Both systems shown above work well for big airports. The system depicted at the bottom is called a Hydrant Fueling System. 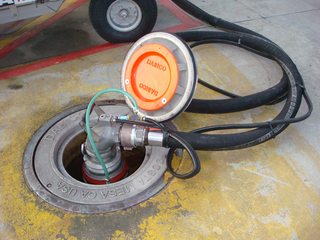 For Amsterdam, fuel is stored in several large above ground tanks (which can be seen from quite a distance away) and maybe some underground tanks as well. From there it is pumped into a system of underground pipes to the refueling pits at the aircraft parking spots around the terminal (and to points from where fuel trucks can be reloaded).

Fuel is thus (depending on the location where the aircraft is parked) loaded either through fuel trucks or using hoses hooked up between the aircraft and the fuel pits (there are special trucks for this containing the connectors and control systems, delivery counters, etc.).

What could affect the entire airport? Blockage at a few key points, failure to get tankers in to replenish the supply, several vital pumps failing together.

More likely it was a localised problem at your ramp, but due to heavy traffic no fuel trucks were available to refuel you by trucking in fuel from elsewhere on the airport.

At Frankfurt/Main airport there is no fuel carried over the airfield to (larger) aircrafts.

There is a pipeline system in the floor and the Trucks only carry a pump and a hose to connect the plane with the fuel pipeline.

Maybe your target airport has a similar fuel distribution system that failed somehow...

Not the answer you're looking for? Browse other questions tagged airport refueling or ask your own question.

2
How are underground fuel pipes monitored for leakage?

17
How does a large airport switch flow?
6
What does the airport fuel market look like?
15
How are in-air refuelling craft grounded to each other?
22
How is fuel vapor dealt with at large airports?
16
What is pressure refuelling and how does it work?
3
What criteria make an airport suitable for a technical stop for a large airliner?
23
How are large cargo aircraft loaded at airports?
10
Denver International Airport pneumatic tube systems
2
Why is there always a fire truck present before refuelling?