For example, are any Australian pilots qualified to land an F/A-18E/F on an American carrier, even if their own plane can't do it?

military aircraft-carrier
Share
Improve this question
edited May 17 '17 at 15:57

The approach to landing on a carrier is a specific technique, wherein an angle-of-attack approach is flown all the way to the deck(and a very firm landing) with the intent of landing on the centerline and catching the 3-wire. An acceptable approach catches any of the wires (there are 4). The counter intuitive(for someone not trained in CV landings) advance-throttles-to-full- power-upon-landing ensures that if the wires are missed (Bolter!) one goes around and tries again if there's enough gas. 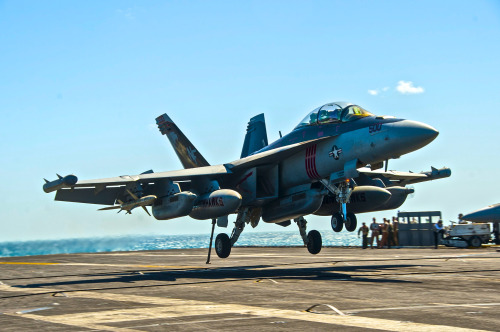 An approach to an airfield typically does not entail this, but instead includes a higher speed approach, and a flare which reduces the impact force on the aircraft (but of course requires a lot more runway).

If the pilot of the F-18 has never had the initial qualification on a carrier(which takes hundreds of field landings and a Carrier Qualification flight), making that approach becomes a non-trivial exercise in risk assessment.

If you aren't trained for it, why are you doing it?

To demonstrate the complexity of the matter:

The USN requires both an initial qualification and currency in order for its pilots, who land on carriers as a matter of standard operating procedures, to do a certain number of landings per quarter/per year/etc in order to remain current. If you aren't current you have to get recurrent to land on the Carrier.

But what if that pilot had a PEP tour?

The US and Australia, among other navies, have a "Pilot Exchange Program" where we trade officers who fly in our services. Part of building alliance relationship. So, if this Australian pilot had done a PEP tour in USN hornets, and been a carrier qualified pilot, he may not be recent or current, but he knows the basics of how to fly a successful approach. It's still a risk assessment issue since the Captain of the Ship, his Air Boss, and this pilot know that he isn't current, and that his kit may be out of configuration compared to USN hornets, so that he's flying a degraded or visual only approach.

He can ask, but a decision to try it will take the safety of the pilot, his aircraft, and everyone/everything on that carrier's deck into consideration first. (Low probability, but on a given day, who knows?)

Here is an interesting story I am sure you will enjoy. It is about becoming qualified on aircraft carriers of our allies. I was attached to Attack-Squadron 86 flying A7-E's in the mid-1980's off the USS Nimitz. Accumulated a little over 300 traps with around 100 of those at night. One trap was VFR during the day in a rainstorm, and I never saw the ship once passing the 45. No needles, no radar, and just my head in the cockpit on instruments flying an instrument approach to touchdown plus/minus 3 feet at the trap. But that is another story.

There was a gentleman in our squadron whose call sign was Bagrat. He was a US Navy Commander. Now he got the call sign for bagging traps. And he was good. We were graded on every trap. There was a No Grade, a Fair, an Okay, and an Okay underlined (perfect). These grades were averaged for a pilot over the period that the ship was at sea and then awards handed out for the top grades. I don't remember Bagrat being in the top much, but there was one thing that was certain, he always got aboard and it was either a Fair or Okay.

The LSOs often had words with him on the debrief. "Hey Bagrat were you spotting the deck again!?" Spotting the deck was a term we used to refer to the fact that the approach was not flown using the optical system (the ball), but by looking at the deck. Not many pilots could consistently land an aircraft without scaring everybody on the deck, and it was seriously frowned upon.

As I said Bagrat always got aboard. The weather didn't matter, the Dutch Roll didn't bother him, pitching deck no problem. He didn't have many wave-offs and didn't bolter very much. I asked him about it one day and he told me that he learned how to get aboard with the Australian Navy. At that time the ship he was attached to didn't have an optical system and so pilots spotted the deck every trap. I can say that Bagrat wasn't one to tell stories so I will take him at his word here. So he was qualified for a time flying off Australian boats, and when I knew him he was qualified flying off the Nimitz class.

Oh, one more thing. Every squadron had what we called zappers. These were decals with the Squadron logo on it. They were usually ovals and around 4 inches on the long axis, and you could stick them on your cruise box, book, whatever. During a Mediterranean cruise a US pilot off one our carriers mistakenly landed aboard a French carrier we were war gaming with. If my memory serves me correctly it was the Clemenceau. After trapping aboard their ship, they zapped his aircraft with a whole lot of zappers, and gave him a complimentary cat shot back home. He should have gotten an honorary qualification, and I sure hope he logged it!

I don't recall any nation's outside the US operating hornets from a carrier. But it used to be that the Argentine Navy who had a carrier and operated A-4s and Super Etendards would make practice traps and touch and gos on US flat tops which were on operations near the coast of Argentina when their carrier was out of action. There are a few stills of this taking place, even in the 2000s, in the video below.

121
How do jet fighters get to war?
10
Do carrier-less militaries retain the equipment for carrier operations?

121
How do jet fighters get to war?
10
Do carrier-less militaries retain the equipment for carrier operations?