ICAO adopted the current airspace classification in 1990. The US followed suit in 1993.

But, I found this:

In case you didn't know, the U.S. had 20 different types of airspace designations prior to 1993. (VATSIM)

What I could find was the Oct 1993 issue of Flying Magazine. From which, I couldn't find the 20 classifications, just 7 old names and some changes.

The FAA order 7400.2D from 1993 includes the change, but I can't find the similar order that precedes it. The preceding document is here, but unhelpful.

Also via here we find: Transition Areas, Continental Control Areas, and Control Areas. All three are now under Class E. That brings the total to 10 out of 20. 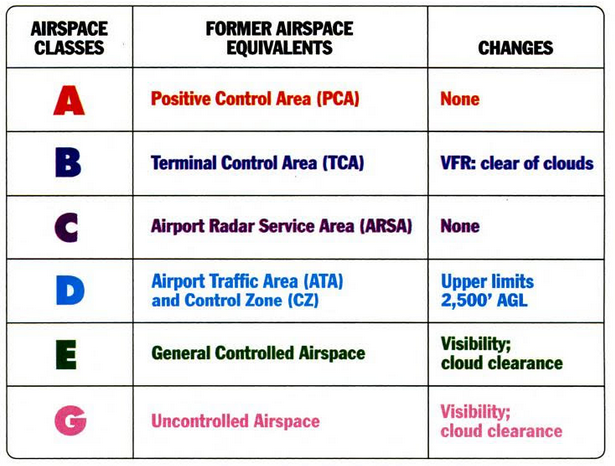 I don't claim to have a definitive answer, but started listing the airspace I recall memorizing or seeing on charts. So here's my current list:

Not the answer you're looking for? Browse other questions tagged usa aviation-history airspace icao or ask your own question.

33
What is Class F airspace, and why is it not used in the US?
23
What is the difference between the airspace's classes (for non-pilots)?
6
What separation and information does ATC provide in different airspace classes?
16
How is airspace in the Persian Gulf determined?
10
What is the primary reason that the non-towered airports ACV, TVL, SGU, BIH, and SIT/PASI have E4 extensions to E2 airspace?
1
Has there been a recent change in the airspace configuration at KFYV-- Drake Field near Fayetteville AR?
4
May the Class-E-to-surface airspace near Eagle County Regional airport (KEGE) and Marshall AAF (KFRI) be ignored when the tower is open?
22
To which airspace does the border of two adjacent airspaces belong to?
1
What is the meaning of "transition area" as used by the FAA? Has the meaning changed over time since the term was introduced?
1
Where does the FAA define the dimensions of Terminal Radar Service Area (TRSA) airspace?