Why is this plane flying a circular track?

Came across this on flighradar24 recently. It shows a jet making a very strange pattern. I would normally expect it to be some sort of aerial survey but seems unlikely in such a large aircraft at such a high altitude (I would expect to see a GA plane do this at lower altitudes). 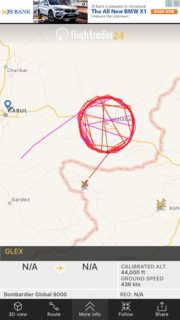 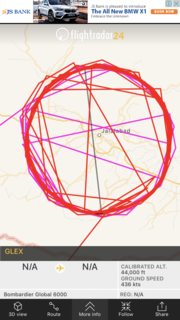 Flight details (still might be able to find flight if you hurry and check out the latitude and longitude): 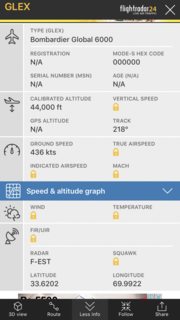 A recent article in Aviation Week showed a modified Bombardier Global 6000 with a "canoe" type fairing underneath the fuselage which typically houses a variety of radar or electronic intelligence (ELINT) equipment (link (free registration req'd) with pic) (alternate). The UK's RAF flies the Sentinel aircraft which is based on a prior Bombardier model, the Global 5000. So it's certainly possible that the track is a valid orbit path for surveillance in that area.

The USAF E11A is based on a Global 6000. It carries the BACN battlefield communication relay system which allows integrated, real-time communication across several, sometimes incompatible platforms. It is designed to operate at high altitudes to allow coms over mountainous terrain.

Since the Jalalabad airport is currently controlled by US armed forces from the adjacent Forward Operating Base Fenty, it would make sense that a communications aircraft would loiter over the area.

If it is a military flight, it looks from the flight path that it may have originated from Kandahar, where the USAF has a base. 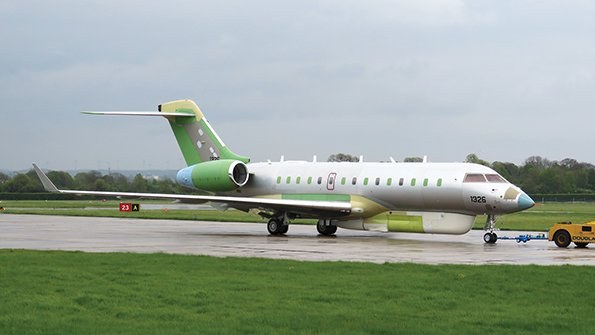 My theory here is that this was a flight check of the NDB at Jalalabad, but I could very well be wrong.

Land-based navigation aids (such as VORs, DMEs, ILSes, and NDBs) can fail, and not always in a "no signal" way -- some failures are more subtle, but can cause the NAVAID to put out dangerously wrong information.

Hence, on a periodic basis or after service work is done, a specially equipped airplane will flight check the signal from the NAVAID to make sure it's correct. Oftentimes, this type of survey work is done by business-class aircraft (such as King Airs or various bizjets) as they can fit into most airports while having the cabin space to house the equipment + a technician or two and the endurance to stay aloft for several hours on a flight-check sortie.

In this case, Jalalabad has a small Non-Directional Beacon (NDB) near the airbase (presumably for approach procedures -- SkyVector does not show any airways that use the NDB).

The rationale for the orbits comes from ICAO Document 8071, Volume 1 Manual on Testing of Radio Navigation Aids, sections 5.3.7:

5.3.7 Rated coverage. Normally, a complete orbit of radius equal to the rated coverage and at a suitable mini- mum altitude should be flown around the NDB. If problem areas are found or if the terrain is considered sufficiently homogeneous that a complete orbit is unnecessary, the coverage can be probed via radial flight or measured in representative sectors by measuring the field strength along suitable airways, also at minimum altitude. Adjust- ments to the NDB antenna current may be required to obtain satisfactory results.

5.3.9 Effective coverage. Effective coverage is obtained from an assessment of the quality of the guidance signals provided by the NDB. The areas where the quality is measured will be largely determined by the operational usage to be made of the beacon and by a consideration of the factors affecting effective coverage described in 5.1.4 to 5.1.10. In most cases, it will be sufficient to fly the air routes served by the NDB together with a small radius orbit around the beacon. However, where the effective coverage is required in all sectors, and circumstances do not permit the coverage to be inferred from selected radials, an orbit commensurate with the required radius of coverage should be flown. Any unusual areas within the required coverage area where the quality of the signal may be affected, e.g. by mountains, should be flown. The flights should be conducted at minimum route or sector altitude and note made of excessive ADF needle oscillation, weak identification or interference, together with DME distance or ground reference points. These reference points can later be plotted on a map to obtain the effective coverage and the location of areas of poor quality. If suitable equipment is available, the ADF bearing from which the aircraft heading has been sub- tracted can be recorded. Where interference occurs from another facility, the interfering station should be identified.

As to the overflights, while there are probably some errors in the FR24 data, at least two if not four of them are legitimate overflights of the NDB, performed to fulfill the requirements of 5.3.12 on testing station passage:

5.3.12 This check confirms that a correct indication is given when passing over a station. The aircraft should be flown over the NDB, preferably from two radials 90 degrees apart, to ensure that an ADF reversal is obtained with an acceptably limited needle oscillation.

There may also be an approach to land at Jalalabad in that pattern, but I can't tell for sure since I wasn't able to get my paws on the approach plates for OAJL. This would be done to check the approach for flyability as per 5.3.11:

5.3.11 Where a holding pattern or approach procedure is based on an NDB, this procedure should be flown to check for flyability from a pilot’s viewpoint. A check is made for excessive needle oscillation, erroneous reversals giving a false impression of station passage, or any other unusual condition.