Is the nose cone of the MiG-21 adjustable in-flight?

I noticed on a video yesterday from another question regarding the nose cone of the MiG that the SR-71's engine cones are adjustable, so that led me to believe the MiG's might be as well, though nobody mentioned it specifically in that particular question.

Yes, it moves forward as the speed increases. Its purpose is "to slow the flow of air from supersonic flight speed to a subsonic speed before it enters the engine."

On the later model MiG-21PF, the intake cone moves to a position based on the actual speed. The cone position for a given speed is calculated by the UVD-2M system using air pressures from in front and behind the compressor of the engine. On both sides of the nose there are gills to supply the engine with more air while on the ground and during takeoff. 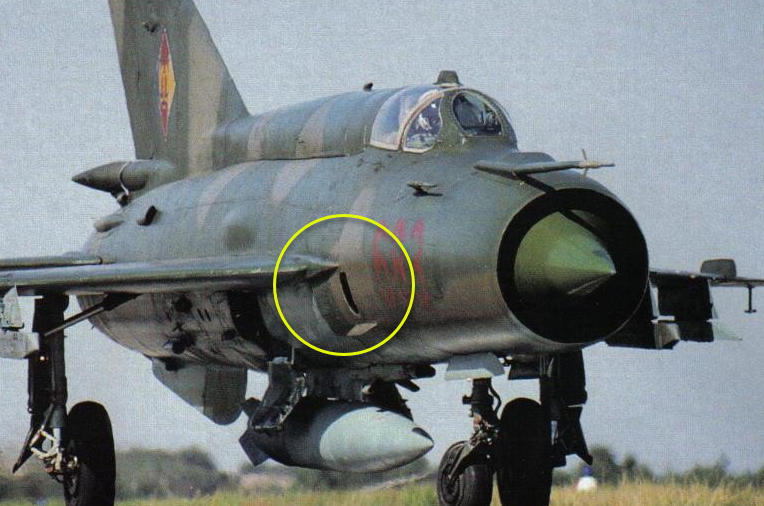 Related: What are the merits of an inlet cone/spike/centerbody vs. a 2D inlet?

Not the answer you're looking for? Browse other questions tagged aircraft-design inlet nose mig-21 or ask your own question.

51
Why is the nose of the Mig-21 shaped so differently compared to other fighter aircraft?
15
What are the merits of an inlet cone/spike/centerbody vs. a 2D inlet?

15
What are the merits of an inlet cone/spike/centerbody vs. a 2D inlet?
51
Why is the nose of the Mig-21 shaped so differently compared to other fighter aircraft?
8
Why does the MiG 21 use anti surge shutters?
20
What is this hole in the nose of the A330?
5
What is the object on the nose of this HondaJet in this marketing video?
3
What were the Concorde's emergency procedures for an uncommanded droop-nose extension in flight?
3
Why is the nose cone of the Su-34 white?
12
What are these hooks and tassels on the nose?
0
Why does the Tu-134UBL have a sharp/pointed nose cone?