What is this smoke coming from an F/A-18 shortly before takeoff?

Watching a video of F/A-18 fighter-jets taking off, I noticed some sort of gas blowing out behind the canopy shortly before the start of the takeoff roll.

In some videos the smoke is more dense than in others. Has this something to do with cockpit pressurization?

It's important to note that between the venting and the takeoff there's a cut in the video.

The engine air inlets of the Hornet, like that of the F-16, are of a simpler "fixed" design, while those of the F-4, F-14, and F-15 have variable geometry or variable intake ramp air inlets. This is a speed limiting factor in the Hornet design. Instead, the Hornet uses bleed air vents on the inboard surface of the engine air intake ducts to slow and reduce the amount of air reaching the engine. While not as effective as variable geometry, the bleed air technique functions well enough to achieve near Mach number 2 speeds, which is within the designed mission requirements.

The conditions being wet/humid would explain the water-vapor like venting.

Part of the boundary layer air is bled through a fixed area outlet into the fuselage boundary layer diverter channel. The other part exits on top of the wing through inlet duct doors, when open.

Here are some photos that show the vents. 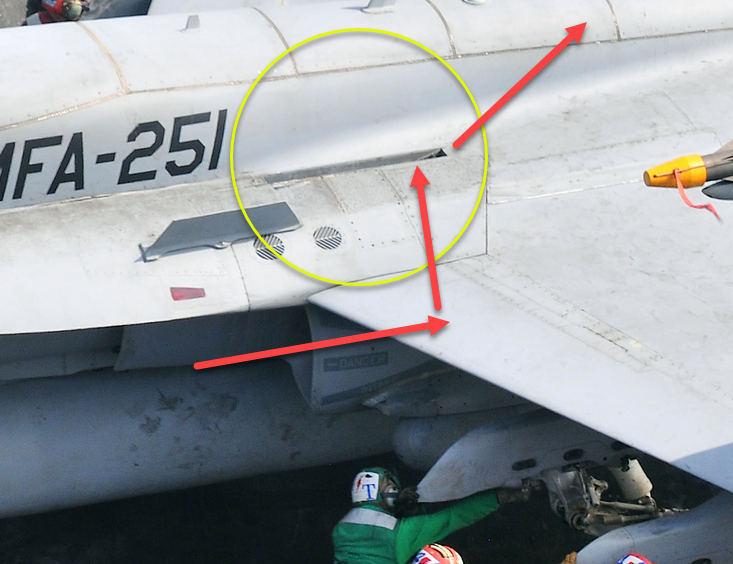 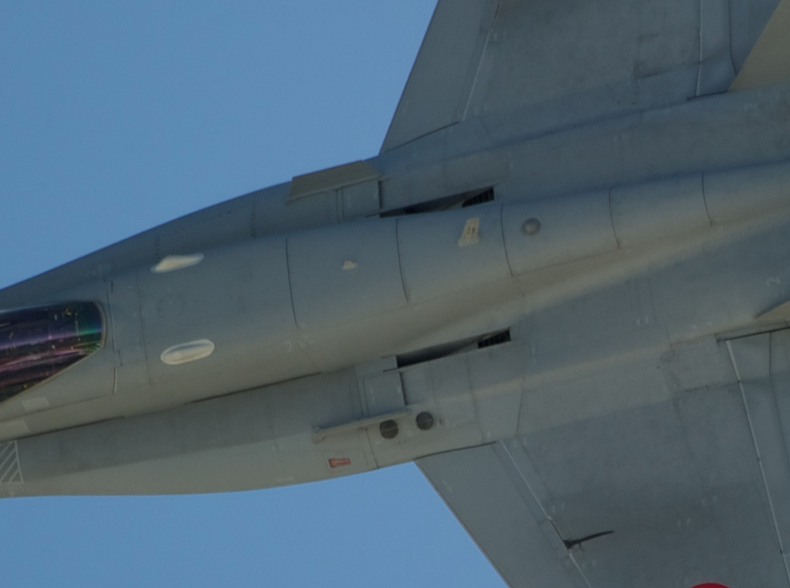 (Source) This is a Swiss F/A-18C with a better view of the vents. Judging by where the leading-edge root extensions meet the wings, it's a solid match for the position at least.

What about the two round vents on the left side?

From this cutaway in Spanish (item 54): They are "air purge grilles / refrigeration". Given that the air conditioning pack (ACM) is also near this area, they're maybe the outlets of the pack. Like the grills on the bellies of airliners. 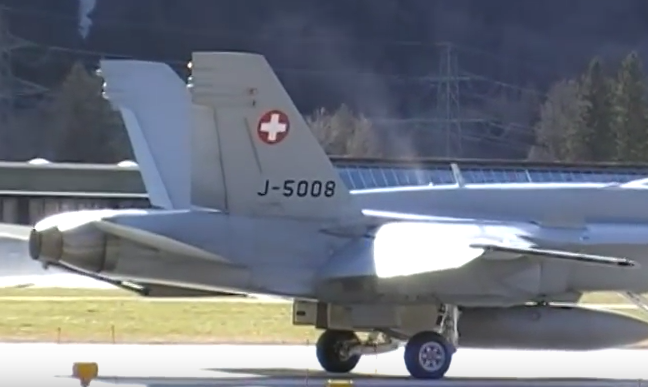 I found it twice more, in each time the venting is on the left side as the engine speeds up. It's very plausible to be ACM related. Either venting of the intake air to reduce the amount of bleed air going to the ACM, or it's the ACM handling the excess bleed air.

Is it something to do with cockpit pressurization?

The pressurization schedule shows that the cabin pressure is not reduced when on ground, so it's not venting of the cabin air.

Is it fuel vent test?

According to the manual, no.

The intake/exhaust of the APU on the F/A-18C is on the underside.

Focus on the puddle I marked above, even play the video frame-by-frame using < and >. You'll see that the venting happens when the thrust is increased.

Whether it's air intake and/or ACM related, it happens when the engine initially spools up.

It is not smoke. It is bleed air being blown behind the heat exchanger which forces cool air across the front of the heat exchanger, this is only happens on the ground. The left side of the aircraft has a secondary heat exchanger that is also cooled by a water spray nozzle. The water is created by the ECS taking bleed air and cooling it. The water is blown out by the bleed air so you can see it more on one side than the other. In the picture, it seems to be raining so the air being blown out is more visible because of the rainwater. -6287

To add to what @ymb1 says in their answer, engine bleed air leaving the turbine compressor travels through a condenser/reheater then into a water extractor, this water is sprayed from a jet ejector in front of the secondary heat exchanger in the LH diverter channel. What you are seeing is simply water vapour.

The two round grills on the left leading edge extension sit over the top of the RADAR liquid cooling system components like the reservoir and pump.

The gas you see escaping upwards is water vapour from the primary and secondary heat exchangers used in the environmental control system (ECS). These ECS components are part of the more specific air cycle air conditioning subsystem and sit just downstream of bleed air subsystem. Air is forced over the heat exchanger to make it more efficient for cooling. The vapour is more noticeable when it is wet or humid outside, and when the pilot throttles up.

Not the answer you're looking for? Browse other questions tagged military takeoff aircraft-systems f-18 or ask your own question.

28
What is this F-18 Hornet “air intake” for?
12
Why do aircraft (namely military) need/use formation lights?

15
What happens to the spinning wheels of the landing gear after takeoff, before retraction?
3
How are takeoff and stall different from each other?
4
On what principle(s) do aircraft smoke detectors work?
39
What is the guy in green showing to the F/A-18E pilot before catapult launch?
13
What aircraft did this canopy come from?
6
Aircraft Carrier Launches: ABE Checks and Signals