What is the difference between a cold-stream thrust reverser and a conventional one?

What is the difference between a cold-stream thrust reverser and a conventional one? It seems that all engines emit hot air, due to the combustion process.

Turbofan engines don't push all air through the combustion chamber. Instead part of it runs along the sides.

This bypass region is where the (cold) air stream is redirected from to create the reverse thrust.

Not all air that flows through a turbofan engine undergoes combustion. In a turbofan, part of the air (in some engines, most of the air) is bypassed around the power turbine; that air is simply accelerated by the compressor fan and is vented, cold, out the back of the engine to provide thrust.

Wikipedia has some pictures and more description. 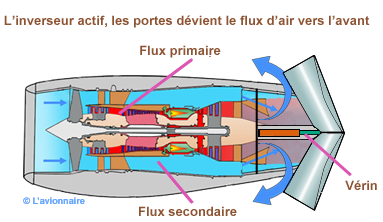 This design was used early on turbojets, and is still used on turbofans with a limited bypass ratio.

These ones use only the bypassed flow accelerated by the fan (the large rotor at the front of the engine, here in gray): 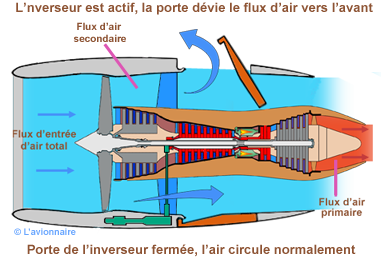 Modern turbofan engines have large bypass ratios, e.g. 80% of air is bypassed. It makes sense to use reversers only on this flow. As the flow bypassing the core doesn't take part in the combustion process, it is known as the "cold flow".

(One door is open, the other is closed, this is for illustration only ; doors are always either all open or all closed).

Some engines had the two types together (perhaps the early Pratt & Whitney engine of the McDonnell Douglas C-17, but I'm not sure):

This combination was used to get a powerful reverse thrust.

The nice colorful images have been taken from this site unfortunately only in French: L'avionnaire.

3
Are there cases of a thrust reverser used on a turbojet engine?
2
Which Thrust-Reverser-Systems are used by which engines and aircraft?