Can the APU provide emergency thrust? 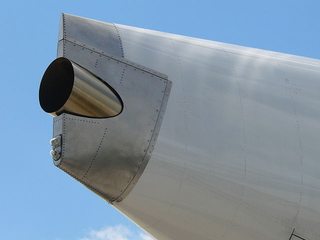 Many larger airplanes have gas turbine APUs (auxiliary power units). It seems that their exhaust is oriented to the rear and might provide some thrust.

How much thrust does an APU provide and would it be enough to keep flying an airplane if the main engines went out?

An APU lacks the critical component that produces thrust, a propelling nozzle.

A propelling nozzle converts a gas turbine or gas generator into a jet engine.

Would it be enough to keep flying an airplane if the main engines went out?

It would, in the sense that it will provide electrical and pneumatic power for the different aircraft systems, but no thrust. Or airplanes would have just been built with a few of those tiny APUs. :)

Another alternative for backup systems power when airborne is the Ram Air Turbine.

RE comment about turboprops having some exhaust thrust, they also have nozzles, which an APU still lacks. (NASA)

Before entering the nozzle (...) the exhaust velocity of the core is low and contributes little thrust because most of the energy of the core exhaust has gone into turning the drive shaft.

The Antonov An-26B cargo aircraft (produced in the Soviet Union) has a Tumansky RU19A-300 combined APU and jet engine mounted on the wing behind the right main engine. This unit provides additional thrust up to 800 kg to improve takeoff and safety in case of engine failure.

This information is from the accident investigation report of Polish aircraft An-26B SP-FDO in Tallinn, Estonia on March 18. 2010. During the flight from Helsinki to Tallinn, 9.5 NM from Tallinn the left engine failed, and the thrust-providing APU could not be started. The aircraft was not configured for landing, flew over the runway and made landing on snow- and ice-covered lake Ülemiste (main supply of drinking water).

The amount of thrust available from an APU would be minuscule as it is designed drive various aircraft systems and adding on a nozzling system geared for propulsion would reduce the power available for doing it's intended work.

Even if an APU was re-purposed for propulsion, it most likely would not be enough to have any significant role. While horsepower and thrust are dissimilar terms that do not have a simple conversion, we can do some comparisons to show how under-powered an APU would be

An Airbus 350 has a pair of jet engines which combine to produce about 195,00 lb-ft of torque. This same aircraft has an APU which can produce up to 1700 equivalent shaft horsepower.

While I am in no way an aeronautical engineer; and these comparisons are on the order of apples and oranges, I don't think it is a grasp to say "it ain't happening" to an APU providing propulsion.

Not alone, but APU can help to get more thrust by taking over the duty to supply the bleed air from the main engines.

Practically speaking, APUs are not sufficiently powerful to provide the thrust necessary to maintain level flight. It is an issue of power (as well as having that power effectively converted to thrust). The APU is designed to provide electrical, bleed air (for environmental control, and for starting other engines), and in some cases they may run other accessories.

It may be possible to have more power available to the main engine(s) if the APU is used for electrical, bleed air, etc. Normally, this is not done in most aircraft.

Thanks to pots and Federico for their answer mentioning the Tumansky RU 19A-300 combined APU and jet engine.

Further search found a NASA paper from 1968 using a GE TF-34 "convertible" turbine that could unload the generator shaft and redirect the power output with "variable inlet guide vanes" to a turbofan.

Around 8000 lbs of thrust could be created as a turbo fan alone. Combinations of thrust and shaft power were also possible.

Generally, an engine out/landing emergency will be in a speed range where a turbo fan (or prop) will be effective (around 150 - 250 knots).

So, maybe the tri-jet isn't dead, it just needs to be tweaked a bit. There are tales of using the 3rd top mounted jet to control pitch-up as well.

Not the answer you're looking for? Browse other questions tagged airliner engine-failure apu or ask your own question.

1
On a Boeing 737, can the APU, BY ITSELF, provide enough thrust to move the plane while on the ground?
16
Was the miracle on the Hudson saved exclusively by the APU?
1
Can an APU be designed to also provide emergency thrust in the event of a double engine failure?

13
Where does the APU draw its intake air?
11
Can an APU exhaust make a contrail in flight?
20
In what conditions is the APU used in midair?
10
Can airliners operate without an operating APU?
4
Why is powering on the APU so low on the A320 emergency checklist?
10
What is meant by a “cold soak" of an APU?
5
What is the source of emergency power for a 727?
5
Can APU start in-flight using RAT or battery power?
1
What's the starting envelope of APU?