What is the difference between published and unpublished waypoints?

While reading some articles about free route airspaces I found reference to two types of waypoints:

Free route airspace (FRA) is a specified airspace within which users can freely plan a route between a defined entry point and a defined exit point, with the possibility of routeing via intermediate (published or unpublished) waypoints ...

My question is the following: What is the difference between published and unpublished waypoints? How are they created? When are they used?

Could you please provide me documentation/citations as well in order to have a complete overview of the topic?

Published waypoints are waypoints that appear on the charts and in the published navigation databases used by GPS navigators or FMSes. They are referenced using the published identifier for the waypoint. Examples: TPA, ITAWT.

The pilot-defined waypoint can then be added to the flight plan.

Here's a snip of how a waypoint is defined in an A320: 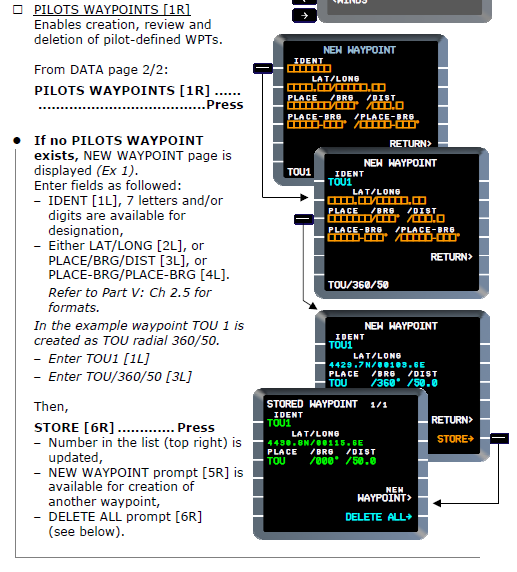 As to when you would use it, the short answer is when you need to or want to. A common example would be to deviate a short distance off an airway (maybe 5 or 10 nm) to avoid a temporary flight restriction. You would just want to avoid the restricted airspace and using a published waypoint or waypoints would take you farther off your route than necessary.

You didn't mention if you're asking about a specific country or jurisdiction (although your question seems to be based on European information), but here's some information about the US situation.

A published waypoint is simply what it sounds like: it's a waypoint that's published on a chart, approach procedure etc. and has a name. This question has more information.

An unpublished waypoint is one that doesn't exist on any public chart. They're used by ATC or pilots. For the ATC side you can read more in the ATC Orders 4-1-5, but essentially an unpublished fix is simply any uncharted point that ATC uses to direct aircraft, such as an ad hoc holding point, a reporting point or something else:

An unpublished fix is defined as one approved and planned for publication which is not yet depicted on the charts or one which is used in accord with the following: [...]

It then goes on to essentially say that ATC can define their own fixes as needed for operational reasons. This (fictional) instruction is using an unpublished fix:

Note that the orders imply a preference for published fixes:

Unpublished fixes should not negate the normal use of published intersections. Frequent routine use of an unpublished fix would justify establishing a fix.

From the pilot's side, a pilot can define his own waypoints for a single flight or as a 'permanent' waypoint in the GPS or FMS. Gerry's answer has a nice example from the A320 FMS but for private pilots, tools like ForeFlight or Garmin Pilot allow you to create and save your own waypoints. That can be useful for a single flight if you want to route around weather, a TFR or whatever. Or if you frequently fly the same route, or use the same private (uncharted) airstrips then creating your own personal waypoints can be very convenient.