Does it make sense to do an emergency landing without nose gear in order to reduce stopping distance?

Would a pilot decide to land without the nose gear down to increase friction if for example all the engines have suffered a flame-out and there is only a very short runway available ? 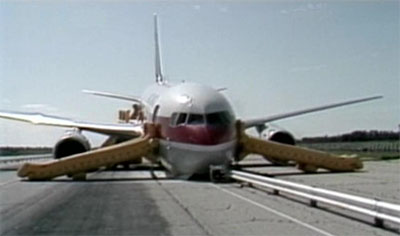 It was luck the manual gravity-extension didn't lock the nose gear in position. That has been attributed to the shortening of the landing roll/slide.

Two factors helped avert a potential disaster: the failure of the front landing gear to lock into position during the gravity drop, and the presence of a guardrail that had been installed along the centre of the decommissioned runway to facilitate its use as a racetrack.

However, no commercial aircraft is certified for it, because it can do more harm than good. And depending on the aircraft type, separate controls for each landing gear in manual-extension mode may not exist.

A hard landing without the nose-landing gear may rupture the fuselage, center fuel tank, or hydraulic lines. And with the added sparks from the sliding, that's a recipe for disaster.

Instead, a system such as the engineered materials arrestor system (EMAS) may help: 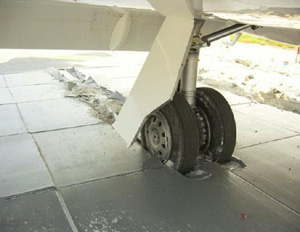 To my knowledge, no established procedures exist for any contemporary civilian airliner that would land with any gear up to decrease landing distance.

However, contrary to other answers/comments, in some aircraft (among others, the B737 NG, check out http://www.b737.org.uk/landinggear.htm for a picture of the manual extension panel) it is POSSIBLE to deliberately lower only selected gear by using the manual/alternate extension system, which usually includes manually releasing the gear uplocks to let the gear free fall to its downlock position. By releasing only the desired downlocks, partial extension can be accomplished.

The answer to this question is best determined in light of risk evaluation. Undoubtedly, metal on asphalt has a higher coefficient of friction than a nosewheel. However, there will likely be some level of repair. It is however, not uncommon for nosegearless (is there such a word?) landings to result in amazingly little damage to the aircraft.

Here's the rub (no pun intended): A metal skid offers less control certainty than a spinning nose wheel. Yes, differential braking on the mains can provide steering, but a skid plate is just not the same as a rolling nose wheel. So not only is the behavior, and noise different for the pilot, but the aircraft attitude will be pitch down. The unfamiliar visual presentation, the unfamiliar noise, the unfamiliar handling characteristics, and the lack of experience conducting similar operations create a higher workload for the pilot, and reduce his ability to rely on common cues. So I would avoid changing things unless there was an extremely compelling reason to do so.

Forget talking about braking on most gliders.

With the nose wheel steering, one can sashay the plane side to side, especially for a light aircraft landing on a wide runway. That increased maneuvering can help bleed of additional speed. Think of it as a way to extend your landing roll.

Also, if the nose wheel has steering command (not a free caster), then the nose wheel will consume some energy during the sashay maneuver, as it will present a side load resistance (friction).

While the nose wheel is less likely to heat up like the mains, and there are seldom fuel tanks near the front of the aircraft, there are fuel lines, and they frequently run near the bottom of the fuselage. So keeping them off the ground can reduce fire risk.

I always do a "brake check" checking the firmness of the brakes prior to landing. Once, a C-208 failed that check with a bottoming pedal on the left side. I landed at a 3500 ft strip, and was able to use beta to slow the aircraft down, and used beta and the right brake to get to the ramp. Of course a C-208 does not have a retractable nose gear, but it was nice having the directional control of the hose gear during the landing and taxi phase. If 3500 ft appeared to be inadequate, my option was to go to a longer field, and face the scrutiny of everyone there, including the FAA.

One additional thought, I had a checkout in a level D simulator where they simulated tire failures. I don't know if they could simulate failure of a gear extension.

A more specific answer is possible if you were to define the intended aircraft.

Near as I know, the answer is no, you cannot nor would you want to. The friction from grinding the nose section of the aircraft may indeed slow the aircraft quickly but sparks and debris kicked up during the landing could create a FOD and fire hazard. It would probably be best to land w/ all three gear down and locked and execute a revision short field approach using thrust reversing and braking throughout the ground roll.

Not the answer you're looking for? Browse other questions tagged landing emergency landing-gear emergency-procedures nose or ask your own question.

10
Can you go around with LAHSO in effect?
38
Why don't modern aircraft have landing gear that can swivel to compensate for crosswinds?
13
Is it possible to control an aircraft on the runway if the nose gear collapses?
20
Why is the nose landing gear of a Rutan Vari Eze up during parking?
20
Is it better to shut down the engine(s) or leave it (them) running when a gear up landing is imminent?
9
Is there no warning if landing gear is not retracted during flight?
26
What does an absolute novice need to learn to make a successful emergency landing?
6
Nose gear failure in single prop aircraft: belly landing or nose landing?
2
How to reduce the landing roll distance