I am flying under IFR. 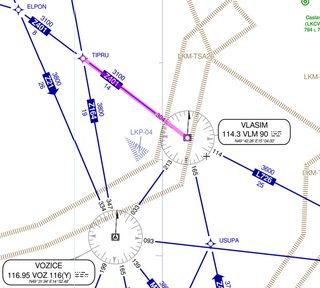 This is an RNAV route. But let us imagine it is non-RNAV and I am flying a non-RNAV plane.

On the NAV1 receiver I tuned and checked I have VLM.

I have a spare NAV2 receiver. Should I tune on NAV2 the nearby VOR VOZ (VOZICE)? If yes, why?

I assume not, unless I am flying RNAV plane which will utilize it as source of position. Even then I am not sure if I should tune it.

Your example is a bit confusing because it seems to be a GPS-based route, it may be better to a look at a more 'realistic' one, where you're using only VORs for navigation. The reason to tune a second VOR is to cross-check your position, either by crossing a specific radial or perhaps by using DME (for a VOR/DME or VORTAC). If that's useful to you then you should definitely tune it.

Here's a US example. Let's say I'm flying eastbound on V241 from the SJI VORTAC following the 081 radial outbound. I've tuned the SJI VORTAC on NAV1, but I have no DME or GPS:

ATC tells me to "report LOXLY", which is 29nm from SJI but I have no DME so I can't report based on that. However, LOXLY is at the intersection of the SJI 081 radial, the BFM 052 radial (BROOKLEY VORTAC) and the NUN VOR 305 radial. That means, on NAV2 I can tune either BFM 052 or NUN 305 and when both the NAV1 and NAV2 needles (as it were) are centered, I'm at LOXLY. You might also notice that the PENSI intersection to the east is defined not only by VOR radials but also by the localizer on runway 17 at KPNS.

In this example, two VOR radials are needed to identify the fix (assuming no DME and no GPS) but you could tune a second VOR even if it isn't required for a named fix, to manually check your progress along your route (see chapter 7 of the FAA Instrument Flying Handbook). You can also time how long it takes to cross two radials on the off-airway VOR and use that information to calculate the distance to it, as a sort of 'manual DME'.

Having said all that, if you don't need or want position information from the second VOR there's no reason to tune it. But especially if GPS is your primary navigation method it wouldn't hurt to stay familiar with them as a cross-check and even as a fallback in case GPS becomes unavailable (which is not unusual).

(As Carlo Felicione mentioned, you could use just one NAV radio and switch back and forth between two VOR frequencies, but that's rather awkward and not something that most people would want to do in normal circumstances.)

Assuming you are using VOR's for IFR in-flight navigation.

You wouldn't just tune to the nearest VOR, you would tune to a VOR on your route and follow a radial inbound.

Once you cross over the VOR, you would follow an outbound radial until such point that you are within navigational signal strength of the next VOR on your course.

I'm not completely understanding your question, can you potentially rephrase or give a situational example to what you mean?

Assuming those are victor airways at the position you suggested, tuning your second nav radio to VOZ at 116.95 would not be necessary to navigate that route, though you could do so if you needed to locate your position on the airway or get an estimate of your flight time to the VLM VOR/DME, if you did not have a functioning DME or GPS on board. You could also use the second nav radios as an additional indicator of when you passed over the VLM VOR/DME instead of simply flying blindly through the cone of confusion and waiting for the flag to change from TO to FROM.

These techniques also can be done with a single OBS as well, albeit it requires frequently changing nav frequencies and OBS settings.

Not the answer you're looking for? Browse other questions tagged navigation instrument-flight-rules vor or ask your own question.

22
Why does this NOTAM make me think GPS is unavailable?

4
Are there ground stations at the waypoints a pilot may fly to?
17
What is the difference between conventional VOR and Doppler VOR?
13
What causes the phase to change in a VOR?
2
Are VOR frequencies static?
1
Is it true that there are VOR/DME and/or TACAN stations in the oceans?
4
What are the VOR channels used for?
1
How do I do these VOR time and distance calculations?
4
Just how inaccurate are (Las Vegas) VOR radials?
1
Is using a VOR considered IFR or VFR?
13
Why am I not getting the “TO” VOR flag as I think I should?