Why have converging runways?

This is Ramstein air base in Germany, 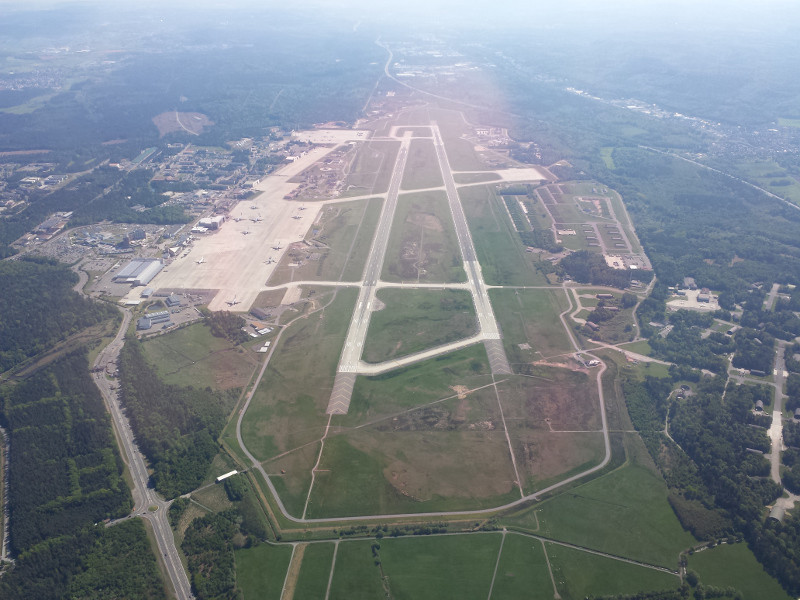 Why would you want to have runways converging (or diverging) like that, doesn't seem to do you much good in terms of parallel usage (either the approach, or the go-around would be exciting).

The only reason I can think of is that it gives you more separation when launching aircraft in rapid succession, but then again only in one direction. And it's not like the military would bother much with separation anyway when there's a – shall we say – pressing reason to get in the air fast.

airport runways
Share
Improve this question
asked May 4 '14 at 14:53

Ramstein is a major US logistics airbase in Germany. Originally Ramstein used to have only one runway. The runway was built with fighter aircraft in mind and could also host C-130 Hercules aircraft. Bigger freight aircraft and passenger aircraft could not use Ramstein and were handled at Rhein-Main base, which was at Frankfurt's international airport.

When Frankfurt needed to expand their civil operations, Rhein-Main base was closed and all the US military tranport operations were transfered to Ramstein. In order to accomodate the big transport aircraft at Ramstein, the airport needed an upgrade. To keep the base open during construction works it was elected to convert the old India taxiway into a runway (08-26) which was made longer, wider and thicker that the original 09-27 runway. Also new aprons were added to the North and South of the runways. When the work was completed in 2005, the old runway was closed for reconstruction. It was then resurfaced and extended so that since 2008 there are two operational runways at the airport, so that in case of maintenance or an incident the operations can continue.

There is no relation to launching fighter aircraft in rapid succession.

Diverging departure paths during a surge (remember Ramstein is a military base, and used to have QRA interceptors on standby 24/7) is probably the main reason here.
Shaves a few seconds from the time needed to get all the aircraft in the air in an emergency.
Landing them all rapidly is less important, as most would be expected to not make it home, such is the nature of military planning for all out war.

As you can see, the alert pads are at the end from which the runways diverge (the far end in your photo), at the other end there's no quick way to enter the runways at all (you need to backtrack along one to reach the treshold of the other). As these would have been constructed with the prevailing winds in mind, that's no real problem.

Not the answer you're looking for? Browse other questions tagged airport runways or ask your own question.

52
How are runways numbered?
17
How often do runways need to have typical maintenance?
7
Why don't airport have heated runways to deal with winter conditions?
9
Why would an airport use crossing runways for takeoff and landings?
6
Why did the north / south runways close at Daugherty Field (KLGB)?
3
How can the runway allocation process be optimised?
23
Which civilian airport has the most runways (current and planned)?
28
Why do airports in the UK have so few runways?
26
Why do airports have directional runways instead of a large area to operate in any direction?