is boundary-layer jet-turbine a scam?

While exploring open jet turbine designs, I've stumbled upon one CAD drawing which has made me wonder.

It is based on a famous Tesla turbine and its highly-efficient way of compressing the fluid.

At first glance the concept seems to make sense, but there should be a reason why it hasn't been explored by the industry? (the only alternative exploration I've found is a cold jet design, which is also a subject to a "scam" tag). 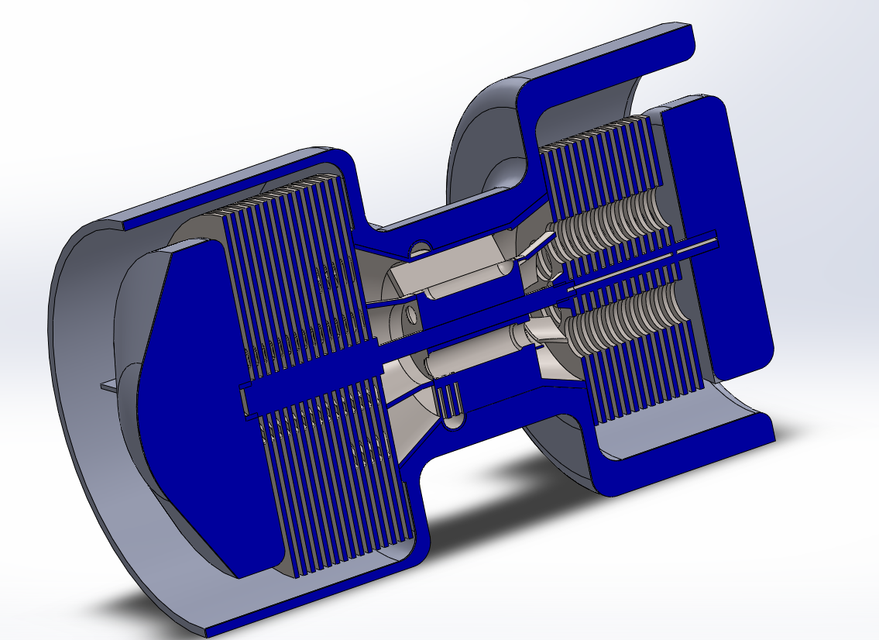 In short, they are both scams that fall heavily into the category of Not Even Wrong or cargo cult science.Tesla's work is sadly a great favourite of conspiracy theorists who do not have the technical background to adequately understand why these devices do not function as intended.

Your "Cold Jet" link should scream "I do not know what I am talking about" not only because of the broken, rambling sentences (although admittedly thats not exactly a rare quality amongst many actual professors) but also because of the over reliance of handwaving any problems away to just an "on board compressed air source"; without any mention of exactly how this on board compressed air source will itself be powered.

As to the tesla gas turbine itself as pictured, just because some guy can poorly model something in Solidworks and take a screenshot of it does not make it a viable design, nor does simply claiming "it has a high efficiency!" make it so.

The disc shaped turbine design apparently works on the basis of the boundary layer viscosity. This is a real effect and to say that boundary layers have been studied intensively is like saying that Everest is larger than a grain of sand.

In this sense the turbine works, very much like an automotive plate torque converter with air instead of hydraulic fluid. It may be an "efficient" design (although I have not been able to find any kind of source that gives any source of figures, accurate/reliable comparison or indeed methodology; and it has never been in any single one of my undergraduate or graduate textbooks) but the torque it is capable of producing is minimal due to fluid shear.

Any kind of small deviation in the surface will lead to turbulence which, on the scale of the disc separation will cause a complete destruction of the boundary layer on which this device depends; which makes this an incredibly temperamental device probably only useful for a single speed which is no good for any practical application (apart from any other flaws it has).

Note that I have concentrated solely on the turbine aspect of this - again, I have not been able to find anything remotely approaching a scientific analysis of this concept with applications as a tesla compressor. Simply having a bunch of discs revolving in close proximity does not a compressor make. You might manage to raise the static pressure of the fluid in close proximity to the rotating elements by a few Pascals solely because of the velocity effect, but you will not experience anything like the compression needed to sustain efficient combustion.

In both cases (compressor and turbine) the close spacing of the plates of the devices will paradoxically probably rob them of any claimed "efficiency" due to their very model of operation (fluid shear) and the boundary layer drag that results. This will also severely limit the mass flow rate through any such device; which in turn severely limits the practical application.

You are better off looking elsewhere. Even model radio control jet aircraft use a conventional miniature centrifugal compressor wheel taken out of a super/turbocharger; with an two-stage axial turbine to provide power.

In the Princess Bride they say "You keep using that word. I do not think it means what you think it means." That applies to much of the words you hear in a discussion of the Tesla turbine. Boundary layer effect and laminar flow are used when friction and turbulent flow are really what is going on. This mis-application of words results in claims for the Tesla turbine that are almost magical, discounting what your eyes clearly tell you. The diagram is a clear case of that. There is no provision for causing inlet air impinging on the forward disks to spin the turbine shaft and no provision for air pushed out of the forward disks by centrifugal force to get to the back disks and make hot combustion gases impinging on the back disks to spin them to cause the front blades to spin and compress more air. And worst of all there is no multistage compression going on anywhere. This is one of the real flaws of the Tesla turbine that nobody wants to talk about. Every working bladed turbine whether steam power plant or jet engine have stationary blades in between the rotating ones. That's how you get a reasonable amount of work out of the working fluid expansion. Without it you've got an inefficient toy.

Take a good hard look at the insides of a jet turbine or any power producing steam turbine. Not just the sappy children's images that show the turbine shaft merrily spinning away but the real diagram that show the stator blades in the housing that are in between the circular rows of rotating blades. Those blades are intended to give the expanding fluid something to push against as it expands to transfer energy of expansion to the next set of rotating blades. That's why bladed turbines are conical in shape, to accommodate the expanding fluid and to give it a specific direction of flow. Newtons law: for every action there is an equal and opposite reaction. Now look at a tesla turbine. A little bit of energy is transferred as the expanding fluid from the nozzle hits the edge of the disks. But since the disks are immobile with respect to each other any further expansion of the fluid transfers no momentum energy to the disks. It's all irreversible energy loss through expansion between the disks. I can make a disk in a opened hard drive spin by blowing hard on it, but that doesn't make it efficient use of my breath. I doubt if it's enough to make a jet turbine work.

Not the answer you're looking for? Browse other questions tagged jet-engine turbine engine-design or ask your own question.

23
Can you identify this jet turbine stage?
5
What are the limitations of using a single shaft between the compressor and turbine in a jet engine?
9
Why are there fewer stages in the turbine than in the compressor of a turbine engine?
2
What is the equivalent of Hobbs and Tach in a Jet or Turbine Aircraft?
10
Why do many large turbofans have a gap (of turbine blades) between the LP turbine and HP turbine?
18
Why do large turbofans generally have many more LP turbine stages than HP turbine stages?
2
How are the compressor and turbine disks connected?
2
How often are turbine blades in jet engines replaced?
3
Are turbine blisks common in jet engines?