Is airflow ever laminar in the boundary layer, near the wing leading edge?

I often see images of the boundary layer over a wing indicating the airflow is laminar over the first portion of the wing:

Transition from laminar to turbulent flow over the wing. Left: source, right: source

I was also told this cannot happen in a full-scale aircraft, as the Reynolds number involved are not compatible with laminar flow.

Would these pictures be misleading?

Flat plate flow (without pressure changes) normally transitions at a Reynolds number of around 400,000. If the flow is accelerated, all speeds in flow direction increase while cross flow will not be affected, so a laminar boundary layer in accelerating flow is stabilized. On modern gliders the lower surface is laminar in excess of 80% chord at higher angles of attack, which can correspond to a Reynolds number of 5,000,000 or more when transition eventually occurs.

On the other hand, a pressure rise in flow direction corresponds to a deceleration in flow direction, so any movements perpendicular to the flow direction will grow relative to the flow speed, and as a consequence the turbulent transition occurs rather quickly. Upper side flow past the suction peak near the leading edge is a prime candidate for transition, and that is what causes flow around the "traditional airfoil" to become turbulent earlier. The graph in your question is misleading because the lower side flow of the traditional airfoil should be as laminar as that of the P-51 airfoil if the surface smoothness of both is comparable.

How laminar was the P-51 wing?

At the flight speed of the P-51 very little laminar flow was left; the full effect of laminar airfoils can only be exploited at Reynolds numbers below 5,000,000. At higher Reynolds numbers it needs progressively steeper gradients to keep the boundary layer laminar, such that the range of angles of attack where a long laminar boundary layer is possible on both sides of an airfoil (the laminar bucket) gets smaller and smaller.

The "rooftop" distribution of the 6-digit NACA airfoils did help, though, because it gives them a higher critical Mach number than the "peaky" distributions of earlier airfoils. The suction peak near the nose of older airfoils will lead to local supersonic flow at a lower flight Mach number, and increased drag from the shocks which would follow. Most important for its low drag, however, was the very smooth wing surface of the P-51 with no gaps ahead of the spar. See this rec.aviation.military post for details.

Measurements on the P-63

The Bell P-63 Kingcobra used early laminar airfoils, the NACA 66(215)-116 at the root and the NACA 66(215)-21 at the tip. British testing of its wing suggests that the build quality of the period's metal wings was insufficient to maintain laminar flow. From the linked Wikipedia article:

The RAE first tested it in an "as delivered" configuration. The wing airfoil was designed to support laminar flow to 60% of chord. In the "as delivered" configuration, a profile drag was measured which was representative of the wing section with boundary layer transition at the leading edge (0% laminar flow). Reducing the surface roughness reduced the drag at low lift coefficients to a level representative of laminar flow to 35% of chord. Measurements were made of the surface waviness. This showed peak wave amplitudes, above the mean, of approximately 0.011 inches (0.28 mm) over a two-inch (5.1 cm) span. The standard waviness criteria shows the critical wave height to be 0.0053 inches (0.13 mm) for this application. To reduce the waviness, RAE personnel stripped the wing to bare metal. The wing was then sprayed with two coats of primer paint and a coat of paint type filler. After the paint was dry, it was sanded in a chordwise direction, using sanding blocks, whose curvature matched the local surface curvature. This was repeated several times. Surface waviness was then measured and found to be no more than 0.005 inches (0.13 mm). In flight, this configuration was found to have a profile drag representative of boundary layer transition at 60% of chord. This gave researchers an idea of what level of wing surface quality was required to actually get the benefits of laminar flow airfoils.

Wing sweep will also make it hard to maintain laminar flow. As explained here, on a swept wing only the speed component perpendicular to the wing will be affected by it, so the accelerating flow past the stagnation point will curve inwards on a sweptback wing. At the same time, viscosity will slow down the flow near the wing skin. The consequence is a twist in the speed distribution over the boundary layer, which destabilizes the laminar flow and leads to early transition.

A C-172 with its four-digit NACA airfoil has the peaky upper surface which will trip the boundary layer very early on the upper surface. On the lower surface laminar flow will last a little longer but will be destabilised by gaps in the surface, so most of the flow on the C-172 is turbulent. On an airliner the Reynolds number is in the tens of millions, so transition will be very early and very little laminar fraction remains. This is mostly found near unswept leading edges like the engine nacelles. Only with advanced technologies like boundary layer suction will it be conceivable that a larger part of an airliner wing can be kept laminar.

Laminar separation sometimes happens when the flow separates shortly after negotiating the nose, like on a five-digit NACA airfoil or an undimpled golf ball. This leads to an abrupt stall and should best be avoided. Normally, the boundary layer transitions into the turbulent state and stays attached until the turbulent boundary layer separates, either at the trailing edge, or progressively further ahead of it when the airfoil stalls.

Sometimes, transition happens in a laminar separation bubble. The decelerating flow past the suction peak is slowed down by friction near the surface, and both effects combine to bring the flow to a standstill at some point. The boundary layer thickens, such that the pressure rise is momentarily suspended, and speed oscillations in the boundary layer get amplified such that cross flows become more intense, mixing outer and inner parts of the boundary layer. The speed profile becomes fuller and the flow near the wall picks up speed again, such that the separation disappears and pressure rise resumes.

Below I plotted the XFOIL results for the pressure distribution around the HQ-17 at Re = 1 Mio (the HQ-17 is used on the ASW-22 Open Class glider, for example). The dashed, black lines show the inviscid pressure while the colored lines show the viscous flow results. On both sides you will see a kink in the colored lines - this is where the laminar separation bubble is. 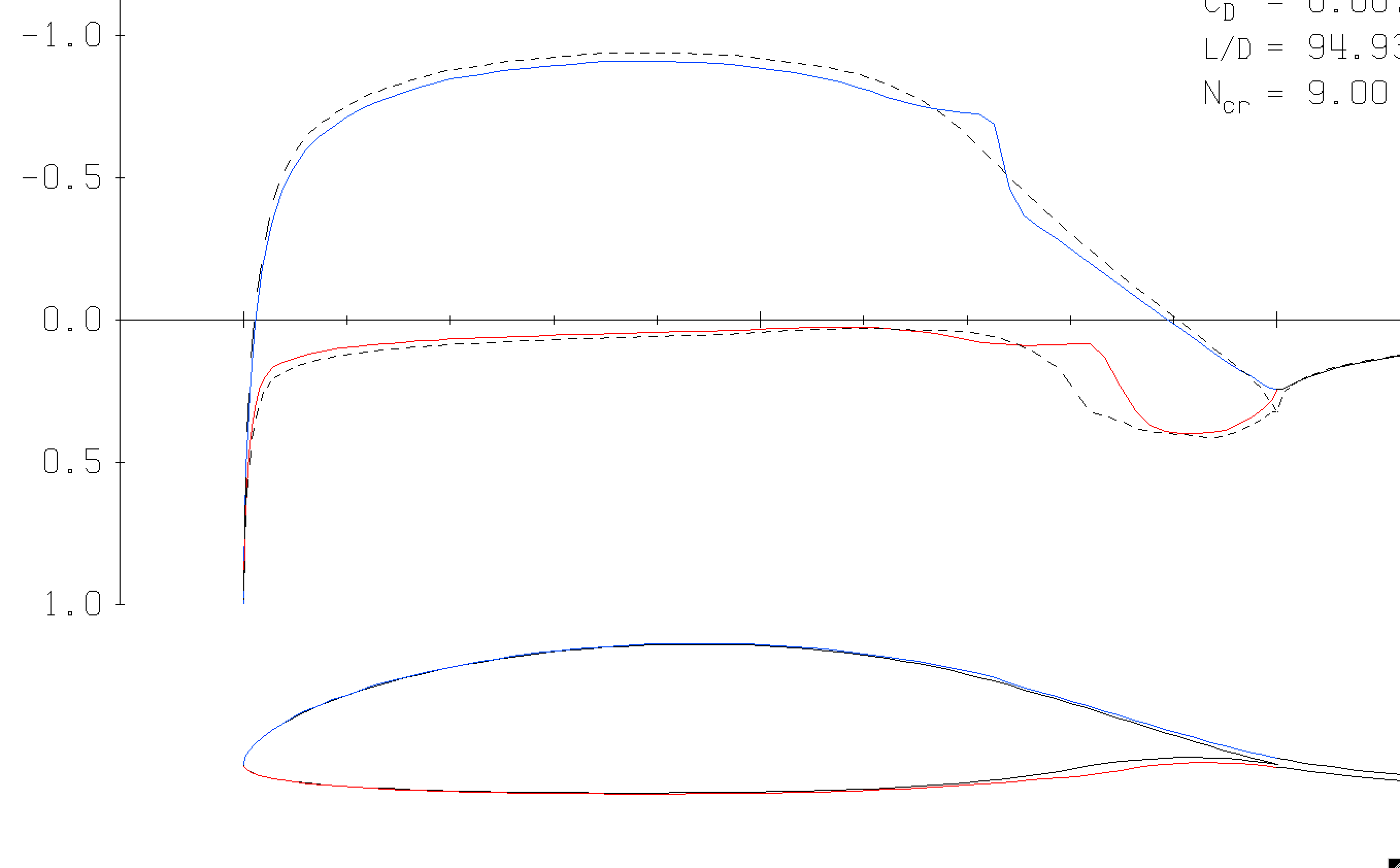 When the flow separates, the pressure line becomes horizontal. After transition it jumps back down near the inviscid line, which shows how much steeper the pressure gradient is that a turbulent boundary layer will tolerate. Reattachment is complete when the steep pressure rise has brought the local pressure back near the inviscid level. Note in the airfoil plot at the bottom that the boundary layer thickness peaks where the separation bubbles are.

Yes, the boundary layer is laminar before and into the separation here. This phenomenon occurs at the scale of model aircraft, gliders and small GA aircraft (100,000 < Re < 5,000,000) but is absent at higher Reynolds numbers because then the transition happens before the laminar flow separates.

The effect of the viscosity can be considered analogous to the dampers in a car suspension. If the damping is good, the suspension eats up any bumps on the road and the ride is smooth. In case of fluid flow, if the viscous term is dominant (i.e. if the Reynolds number is low), small disturbances in the velocity field, caused by perhaps surface roughness or vibrations, are not allowed to grow and the flow is smooth; however, as the Reynolds number increases, the viscous damping reduces and the small disturbances in the fluid field can grow and the flow becomes erratic i.e. turbulent. The flow can also become unstable due to resonance.

It's important to note that the turbulent flow (which is found over most of the commercial aircraft wings) is different from separated flow. Flow over most of the wing is turbulent, but attached. The Reynolds number of large commercial aircraft increases over the wing at the rate of over a million per foot. In these cases, the flow is rarely, if ever, laminar. In fact, Boeing admits:

Current Boeing commercial airplanes are not expected to have significant regions of laminar flow, with the exception of the 787 nacelles near the inlet lip, as expressly designed. There may be very limited regions of laminar flow near the leading edges of wings, especially lesser swept wings such as used on the 737 and 757, and blended winglets.

Not the answer you're looking for? Browse other questions tagged aerodynamics wing reynolds-number or ask your own question.

25
Is there a maximum lift to drag ratio?
15
What is the reason for the poor low-speed characteristics of sweptback wings?
12
Why isn't there a single best airfoil for subsonic flight?
23
Is a golf ball surface a good idea for wings or fuselage?
16
Can the plane Celera 500L be eight times more fuel efficient than a jet of similar size and capacity?
13
What is the difference between flow separation and turbulent flow?
12
How should we think of 'layers' of air flow?
8
How does Reynolds Number affect skin friction drag?
6
What is a laminar airfoil and what are their pros and cons?
4
Does the Reynolds number on a smaller model need to match the one of the original aircraft?
See more linked questions

8
When should I use the global Reynolds number and when the local Reynolds number?
8
How does Reynolds Number affect skin friction drag?
4
Do vortex generators increase Re of a wing?
0
Could an arrow planform be better for a supersonic aircraft than a delta? Why?
3
Is it possible that as the Reynolds number increases, a laminar bubble increases in extension?
0
What suits best for lateral controllability at high Angle of Attacks- a vortex generator or wing slots?
0
Why aren't HLFC panels mounted on wing?