Do parking brakes lock the wheels and airframe together? 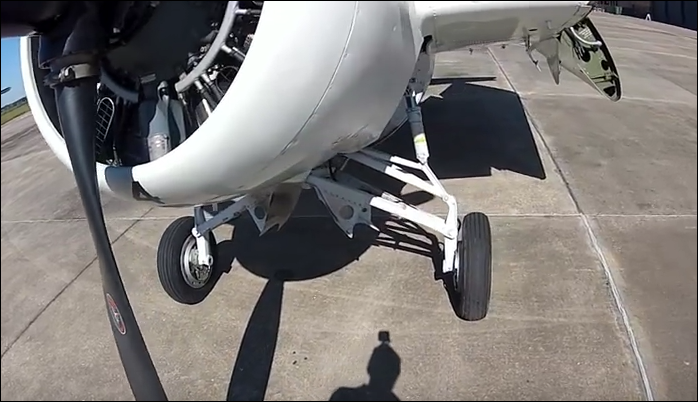 For planes with non-truck undercarriages, can they be rotated around the lateral axis of the main landing gear with the brakes applied without causing translation?

My answer is no, they must be locked and there must be translation (image below).

I had the following comment on a recent answer, and frankly I'm not quite sure, hence the question.

[They] are wheels. The whole structure is free to rotate around this 'locked' axle...

I don't agree, imagine chocks are placed forward of the main landing gear:

(Original) Above shows what I mean by translation, the plane moves forward (blue distance) with the wheel—plane frame (red lines) being locked. (Brakes are applied.)

Note: This question has nothing to do with deceleration or a running engine.

Yes, the parking brakes lock the wheel and the airframe together. If the brakes are not applied, the wheel can rotate round the axle.

If the wheel's position is fixed to the ground (e.g. by adding chocks, but the brakes are not applied, then the aircraft will rotate round the wheel axle when the tail is lifted by the blue man.

If the brakes are applied, but the wheel's position is not fixed to the ground, the aircraft will rotate round the wheel's point of contact with the ground. Since the contact point moves as the wheel rolls, this results in translation in addition to the rotation.

If both the brakes are applied and the wheels are on chocks, the wheels either have to roll over the chocks or something (the wheel, the chock or the brake) will have to slip.

If you're asking if an aircraft like a taildragger can be tipped forward rotating about the main landing gear axles, the answer is yes and you do have to be careful of this not to apply too much braking pressure during taxiing or during the landing roll.

Let's look at the DHC-2 as an example. Most data is taken from the DHC-2 manual. Here is a basic diagram of the forces involved: 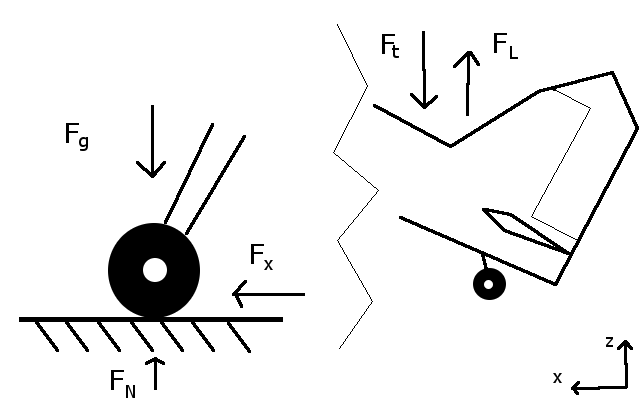 The friction force Fx can be up to Fgμs, where μs is the coefficient of static friction, which is about 0.9 (depending on conditions of course).

If the plane is prevented from translating forward, then the airplane will rotate around the wheel axle. The tires are 20.5 in (0.5m) diameter, so the moment on the wheel from friction can be up to 3540 lbft (4800 Nm).

It's also worth noting that right before the tire overcomes static friction, you would need an equal and opposite force to oppose Fx, which would be 4160 lbf (18500 N). We would need the mythical frictionless massless (spherical, immovable) chocks to provide this force without adding rotational resistance to the tires.

Not the answer you're looking for? Browse other questions tagged braking or ask your own question.

20
Would a stationary WWII fighter fall on its nose with full throttle and brakes on?

22
When the brakes are checked, what do the firemen actually do?
12
What are the relative braking contributions from wheel brakes, spoilers and thrust reversers?
1
What brakes are used between line-up and takeoff?
8
Why are parking brakes not used for parking jetliners?
4
Engines more powerful than the brakes?
1
What are the three sources that are relayed to the brakes and steering control unit of an A320?
8
What powers the air required for pneumatic brakes in aircraft?
2
How does keeping the parking brake applied when brake temperatures are high contribute to the dragging brake phenomenon?
8
What's the difference between multiple disc brake and segmented rotor brakes?