Would an Aero L-159 Alca air frame be able to withstand a supersonic engine?

First question is, can it be fitted with any modern supersonic jet engine?

If YES, why isn't Aerovodocody doing that? 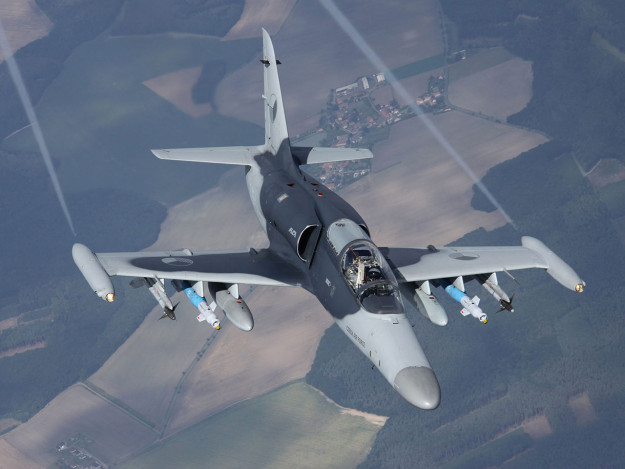 By 'supersonic jet engine', I presume you mean an engine which would make an L-159 capable of supersonic flight. Could you mount such an engine on this aircraft? Possibly, but why would you want to?

An L-159 isn't exactly engineered to be a top of the line high performance fighter; its design and intended use is as an advanced subsonic trainer aircraft based upon the earlier L-39 and L-59 airframes. Its job is to prepare student pilots for more advanced tactical aircraft and has handling qualities similar to fighters while retaining forgiving flight characteristics for new students so they can more easily build time and experience in high performance jets. In addition, the aircraft is designed to be affordable and easy to maintain for third world air forces. Supersonic flight never was considered as a requirement for the role by Aero Vodochody. Therefore a much more expensive and exotic engine is not needed here.

First question is, can it be fitted with any modern supersonic jet engine?

Fitted? Why not. It wouldn't have any advantage though.

If YES, why isn't Aerovodocody doing that?

Because it wouldn't make the plane fly supersonic anyway.

Just look at it. Straight, relatively thick wing, small small elevator with fixed stabilizer. If you try to push such design above around M0.7, the drag will start to increase like crazy and the nose-down change in trim will really test the limits of elevator authority.

For supersonic flight you need either swept (for low supersonic) or thin wings and an all flying horizontal stabilizer. That is, a completely different design.

The Albatross family of jets will only have the third world market as it stands. 1st and 2nd world markets are beginning to be dominated by supersonic trainers, so the question isn't without merit. You don't build trainer jets just for aerobatics.

As others mentioned, the wing is too straight, and the stabilizer isn't all-moving. You need both, or it will just dive and crash. Good looks isn't enough.

As a supersonic trainer, it doesn't need to be very fast or go past Mach 1.5, just enough to provide supersonic training. Assuming so, the intakes should be fine. The engine change should also be minimal, as there is a version of the F-124 that now produces 48kN dry. That's almost double, so I doubt it's not enough thrust. Yes, all this would only make sense if the jet is able to supercruise, or it would, as others point out, have stubs for legs.

The L-39NG is now out and that plane with its 16kN engine shows that Aero is focused on an economic trainer more than a high performing one. The Albatross simply needs major surgery for the latter.

If anything, the G-4 Super Galeb is better suited for the job with its Tomcat style swept-wing and all-moving tail.

Assuming you can find a modern supersonic engine that physically fits, then yes it can in principle be fitted.

But if you mean could it then go supersonic, no it could not. It is not designed either aerodynamically or structurally for supersonic flight. Drag would build sharply at transonic speeds, due primarily to the straight, unswept wing and tailplane. If the engine were powerful enough to overcome that, then the aerodynamic forces unleashed by the transonic shock waves would rip the plane to pieces. Supersonic jets have to be a lot stronger than their subsonic cousins. That was a lesson learned the hard way when planes with suitable engines and aerodynamics were first flown, and Aerovodocody have no wish to kill any more pilots.

6
Why are podded engines preferred over engines fitted inside the fuselage or wing?
7
What is the average speed used by modern jet fighters when in dogfight?
2
Has a jet “engine” ever been made that only uses the thrust from the bypass air and doesn't have a combustion chamber?
3
Why is there a minimum altitude for at least some high-speed jet engine restarts?
1
What are the major causes of flameout, excluding ingestion of foreign objects?
4
Does the P&W F100 turbofan engine of the F-16 really produce this much power?
16
Why do the 737-100's JT8Ds, and no others, have suck-in doors?
36
Why do new jet engines cost billions to design?
9
Is engine sync to avoid beat frequencies also a concern for jet engines?