What would be the airspace class when no vignette is visible on a US VFR sectional chart?

For example, Grayson County (M20) - circled here in red - has no pink vignette but other airports near it do: 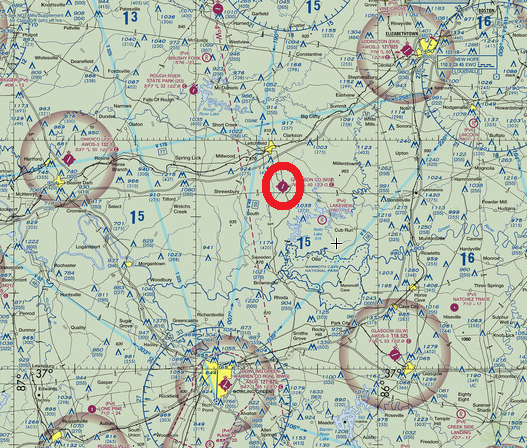 The vast majority of US airspace where no more restrictive airspace exists has class E starting at 1200ft AGL with class G below. You can see an area of class G up to 14,500 MSL just north of the TCS VORTAC near to Truth or Consequences, NM which is south-southwest of KABQ. There are several other areas in the 48 states as well. As long as the airport you are talking about "near airports with pink vignettes" is not under the pink vignette, then G extends to 1200 AGL. If it's inside the pink vignette, G extends up to 700 AGL. Of course, if it lies within a pink dashed line indicating class E to the ground at such a nearby airport, then the airport you mentioned does not have any class G above it either.

One other helper I use - if you see any federal airways nearby and there is no blue vignette indicating the presence of class G up to 14,500 MSL then you can usually safely assume it is class E above 1200 AGL if no other more restrictive airspace overlies the area. Federal airways are 4 nm wide on each side or the course centerline and always exist within controlled airspace (class E or better). These are labeled on a VFR chart as the light blue lines with V-number labels - also called Victor airways. As such, V 49 west of the M20 airport you mentioned would be an example and is pronounced "Victor forty-nine".

As noted earlier more and more Class G airspace from surface to 14,500 ft MSL are being converted to Class E airspace due to increased traffic congestion in the CONUS. Examples can still be found in the southwest. Large swathes of Class G still exist in Alaska due to vast remote sections of territory there.

Another way to check the airspace around an airport is to look it up in the Chart Supplement. M20

You will notice that there is no airspace line in the airport data. That usually means it is Class G. All of the other airspace types (E,D,C,B) are listed e.g.

If you see clearance delivery, ground, and tower frequencies then, at least for most of the day, the airspace is not Class G.

8
What are concrete examples for class G up to 14500?
5
Why is it assumed on sectionals that the area outside of a 700 AGL Class E (Echo) transition area is Class E starting at 1,200 AGL?