Can any land-based plane be made to land on water?

Can any land-based plane be converted to a seaplane by installing skids? For example, is it possible to convert a Boeing 747 to one that is capable of landing and taking off on water using pontoons or planing hulls?

Well "any" is an awfully broad statement, but the answer is "Theoretically yes." -- You would just need floats that displace enough water to provide buoyancy for the aircraft at its maximum gross weight.

For a 747 that would be impractical: We're talking about a plane with a maximum takeoff weight in the neighborhood of 700,000-900,000 pounds depending on model and variant, and that would be an ENORMOUS set of pontoons. The form drag alone would be prohibitive, nevermind the structural work required to attach the pontoons in such a way that they won't be ripped off at takeoff speed in the water or blow off the plane in cruise flight.

For smaller aircraft it's certainly do-able: You can take a Piper Cherokee 180, remove the landing gear, and install floats (Piper kit #756-746) to make it into a seaplane: 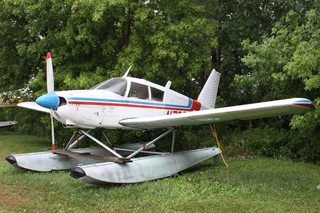 Note the structural bracing for the floats, which attach both at the main landing gear point and the nose landing gear point to enable them to take the loads imposed by taxiing through water. There are also a bunch of additional seals and blanking plates installed as part of the seaplane kit to prevent the aircraft from taking on water.

Note however that just because something is possible doesn't mean it's a good idea, and the PA-28S is an example of that: The low-wing design of the Cherokee coupled with its single door on the right side makes the seaplane version an exercise in impracticality.

You could, but why would you want to.

Yes, in theory, an 400,000 kg airplane like a 747 could be fitted with floats capable of displacing the 400 cubic meters of water required to keep it afloat, albeit with a decrease in performance. It's not that unrealistic; if a 747 can carry a space shuttle on its back it stands to reason that it can haul a pair of floats as well. As to whether current naval architecture can create a structure light enough for this yet strong enough to allow for water operations remains to be seen.

But since a 747 already has a 7000+ mile range and can reach any number of large terrestrial airports on a single tank of gas, there really is no need to fit the aircraft with floats for water operations.

29
If I have a float plane, can I land on any body of water?
11
Can airliners benefit from vertical take-off and landing?
7
How is the direction chosen when landing a seaplane on water?
5
How is risk managed in single engined piston aircraft flights?
4
Can a seaplane make a long distance sea voyage on the sea?
26
How to slow down a seaplane on water?
3
Which one needs longer runway of an airplane between take off and landing for a constant weight?
14
Would a two-seat light fixed-wing aircraft with a landing speed of 20 knots and a top speed of 180 knots be technically possible?
33
Do any aircraft carry boats?