How is oil distributed through the engine in a wet sump system?

A wet oil sump is within the engine crankcase. However, how is the oil distributed throughout the engine and all the other magical parts? I know for a dry oil sump, it's with a oil pump which holds the oil from a reservoir, but for wet oil sump, how?

The short answer is "The same way as in a dry sump system." – There is an oil pump which sucks oil out of the oil pan and forces it through the engine oil galleries under pressure.

Wet and dry sump oil systems only really differ in where they store "extra" oil.

In a wet sump system the oil is stored in the oil pan under the engine. The oil pan serves as both the oil tank (holding the supply of lubricating oil) and the oil sump (where oil eventually collects after making its way through the engine). The pressure pump sucks oil directly from the oil pan and circulates it through the engine's oil galleries. 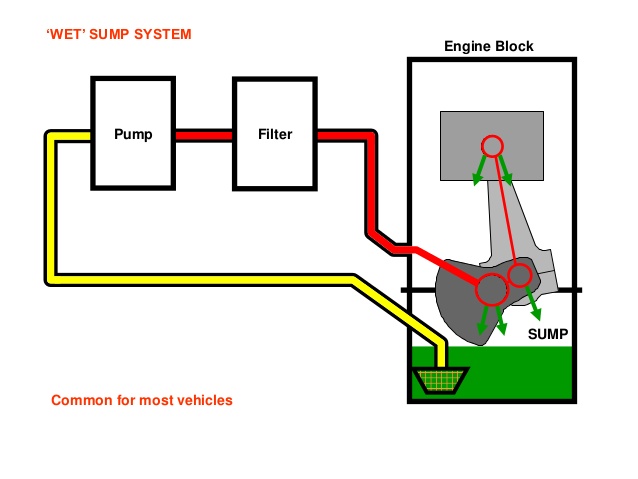 Dry sump systems store their oil in a separate tank, which feeds the pressure pump. Dry sump engines have a smaller oil pan which only serves as a sump, and a "scavenger pump" that drains the sump back into the main oil tank. They are termed "dry sump" systems because under normal operating conditions very little oil remains in the sump. 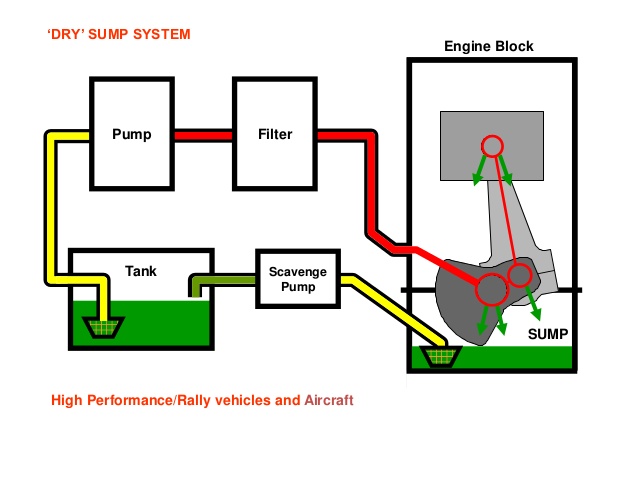 Note that there are other engineering differences in dry-sump systems, but they're largely beyond the scope of your question.

Not the answer you're looking for? Browse other questions tagged aircraft-systems piston-engine or ask your own question.

8
What may be the cause of hot start problems in a Lycoming fuel injected engine?
5
Why Rotax 912 "burps the tank"?
7
Is a lower CHT on one cylinder cause for concern?
1
How do turbofans and piston-engines compare in terms of maintenance costs?
2
How do check valves regulate the air in a multi-engine airplane's vacuum system?
1
How to lean with constant speed prop on multi-engine aircraft without EGT
49
Why are two-stroke engines nearly unheard of in aviation?