How does bank angle differ from roll angle with respect to stability in fixed-wing aircraft?

I would like a clarification on bank angle and how its different from roll angle with respect to to fixed wing aircraft. It is my understanding that the bank angle is a result of rotating the aircraft body to the stability frame, implying that if the angle of attack $\alpha$ and the side slip angle $\beta$ are zero then, and only then the bank and angle and roll angle are the same. Based on Stevens and Lewis Aircraft Control and Simulation (which doesn't define bank angle) the rotation from body to stability(wind) frame is given by $$ C_{w-b} = \begin{bmatrix} &\cos\alpha \cos\beta & \sin\beta & \sin\alpha cos\beta \\ &-\cos\alpha\sin\beta & \cos\beta & -\sin\alpha\sin\beta\\ &-\sin\alpha & 0 & \cos\alpha \end{bmatrix} $$

where $\phi,\, \theta,\, \psi$ are standard aerospace Euler angles defined based on a 3-2-1 rotation. My specific questions are:

1) is my understanding and calculation of bank angle correct? If not can someone point me to a good resource for this. I was surprised to be able to find a clear definition and formula quickly.

2) by multiplying the second and third row of $C_{w-b}$ with Euler angles we obtain a set of other two angles relative to stability frame. Do these angles have any names or specific role in aerospace dynamics/control?

In my experience, "bank angle" and "roll angle" mean exactly the same thing. I've only ever heard of one meaning of either term.

For completeness, here are some "plain English" definitions of all three Euler angles:

Heading (sometimes called "yaw angle") is the horizontal direction that the nose is pointing, measured clockwise from true north.

Bank angle (sometimes called "roll angle") is the amount that the aircraft would have to roll (rotate around its longitudinal axis) in order to bring the wings level (which is to say, bring the lateral axis parallel with the horizon), with the top side of the aircraft facing above rather than below the horizon.

You may find more in the Wikipedia Flight Dynamcs page, though I have some heartburn with it. The names for the earth to wind transform are bank angle, flight path angle and heading angle. I don't have the Cw-b matrix handy now but have the Cb-w from an old reference: Dynamics of Atmospheric flight by Bernard Etkin 1972, pg 117 Cbw cos a cos b -cos a sin b -sin a sin b cos b 0 sin a cos b -sin a sin b cos a I don't have Matlab installed or I would invert it for you.

If you are simulating an aircraft you should be aware that the Euler angle rotations have a problem and for certain sets of rotations a singularity will arise causing an instantaneous pi/2 change in angles. This typically only is a problem for tumbling spacecraft or wild aerobatics. If interested, you should study Euler symmetric or Euler–Rodrigues parameters and Hamilton quaternions.

Most of my references are too old but may be of interest. For basic flight dynamics: Dynamics of Atmospheric flight by Bernard Etkin 1972 Airplane Performance Stability and Control, Perkins and Hage 1949

This is one of semantics. Bank is a state, whereas roll is an action; e.g., “The pilot rolled into a steep turn and held a 50° bank angle.”

Roll is often used as a verb describing rotation around the longitudinal axis of the aircraft (at least with pilots, especially flight instructors). If the aircraft has zero pitch elevation angle, then bank angle could be determined by the amount of roll that occurred from wings level. When at non-zero pitch elevation angle, the rolling movement is used to establish a bank angle, but roll change and bank change may not be the same. When pitched up at +90 degrees, or down at -90 degrees, then bank is no longer meaningful, but the aircraft can still roll around the longitudinal axis. 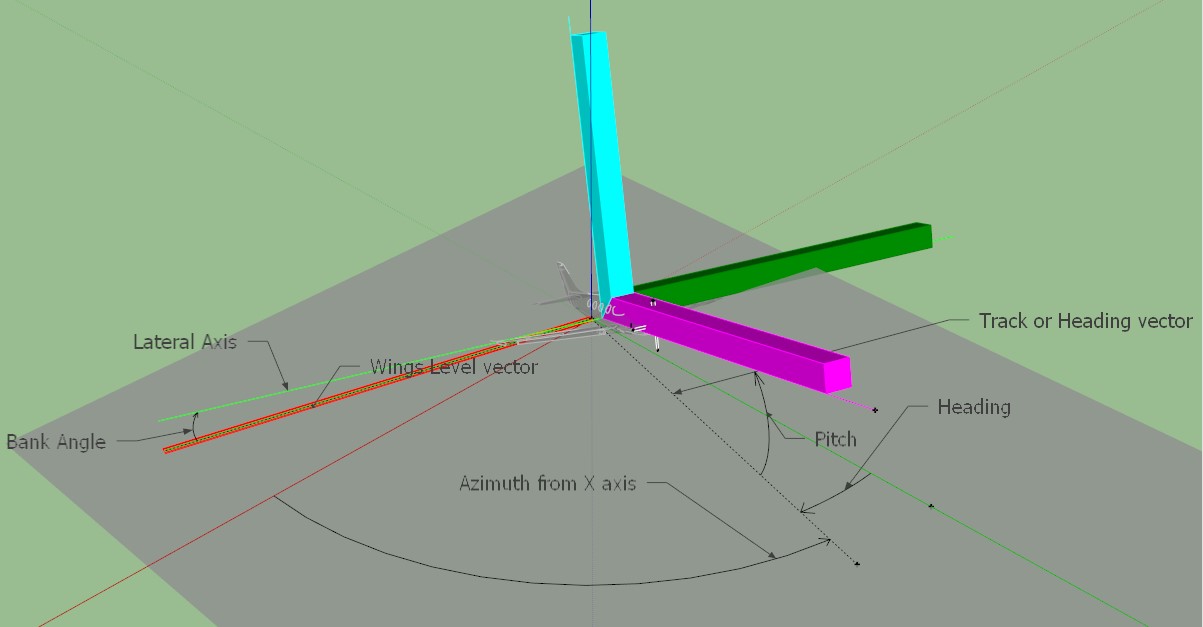 Near the center is a semi-transparent aircraft. The square pink column represents the longitudinal X axis, the dark green column is the Y axis out the left wing, and the cyan column is the aircraft's vertical or normal axis. (Often in aerospace engineering, the green axis is out the right wing and the vertical axis points downwards. Not in this case.) The thinner and lighter green line out the right wing represents the reverse of the green Y axis, representing the lateral axis. These axes are in a local coordinate system for the aircraft. The orange line is the product of the pink longitudinal axis and black world vertical axis. Bank angle is the angle between the lighter green lateral axis and the orange wings level axis.

At pitch elevation angles of +90 or -90 degrees, the cross product of lateral and wings level vectors is zero, and bank is meaningless. (I had a URL reference for this at one time that was a snippet of source code, but I can't find it at this time).

2
How to calculate the stability derivative of Pitch Moment with respect to AOA rate?
8
How does the performance of an aircrafts propeller change with respect to distance from obstructions?
8
Is the low air pressure on top of the wing the major contributor to lift?
14
What is “settling with power” and how does it differ from vortex ring state?
0
What are the equations of motions for parafoils?
1
How does angle of incidence affect an aircraft's stability?
1
Does Wing Area vary with angle ot attack?
3
Sensitivity of aircraft stability with respect to the CG location
4
Finding Angle of Attack/Angle of Sideslip using East/North/Up Coordinates
1
How do STOVL and V/STOL aircraft differ?