How are Max Brake Energy Speed & Weight affected by other factors?

I'm a student pilot and I'm trying to understand how different factors affect VMBE and Maximum Brake Energy Limited Take-off Mass. I made some researches but I couldn't find anywhere a clear answer.

What is the effect of Density, Flaps, Mass, Runway Slope, Runway Contamination ?

I know that to solve these kind of problems we use the kinetic energy formula: $\small Eb = \frac 1 2 MV^2$ but I don't know how to use it to explain the effect of every factor mentioned above.

(I need your help because I don't want to just learn things by heart and not be able to explain that in an interview or whatever).

The factors you mention will affect how much energy the aircraft has that's going to be transferred into the brakes, and how much will be lost otherwise. The more energy you have, the slower you can go before the brakes are overwhelmed -- thus, reducing your VMBE.

With more flaps, energy will be dissipated in aerodynamic drag, although probably not all that much (though going from the least possible to the greatest possible flaps may make some difference -- or it may be sufficiently slight that the charts are published with a worst-case scenario & if you have greater flaps then your situation will be slightly better than what's charted). With runway gradient, you'll dissipate some energy rolling uphill, while you'll have more energy (potential energy becomes kinetic energy) rolling downhill.

The really significant factor is aircraft weight, as your formula makes clear... an aircraft stopping at 100,000# will have 2/3 of the energy of an aircraft stopping at 150,000#, all else being equal. So, in those two cases VMBE would be much higher for the 100k case... if Limit = 0.5 * wt * V-squared, you can have a higher V-squared to reach the same limit with a lower weight.

Contamination probably wouldn't matter much: while you would be transferring energy more slowly into the brakes stopping on a slick runway than on a dry one, the total energy absorbed into the brakes would be the same. So unless the rate that the energy is absorbed changes the maximum energy that the brakes can absorb (seems like it would be unlikely, although in some cases... who knows), contamination wouldn't affect VMBE. (Unless the charts take stopping credit for the deceleration due to "plowing through" contamination -- which would actually help out to some extent.

The effect of weight, flaps, and slope on the actual VMBE would be that things which give the aircraft more energy (more weight, less flaps, downhill slope) would reduce the VMBE. Think of it in an extreme case... if you had the brakes of a bicycle, a one-pound vehicle could go insanely fast before you could put enough energy into the brakes to cause a problem, but if your vehicle were, say, the Space Shuttle, even at slight speed, the brakes would be overwhelmed by the KE of that much mass. Consider likewise, a 45 degree downslope vs a 45 degree upslope, or the drag caused by a huge drag chute vs the drag of a pencil flying through the air.

Maybe it's clearer to say that VMBE is the maximum speed to reject the take-off within the energy capacity of the brakes alone (Max brake energy speed). Brakes convert kinetic energy into heat. Once the limit is reached, the brakes fade. So above VMBE the brakes will not work.

VMBE is most limited by:

On the other hand, if the Allowed T/O Mass is Brake Energy Limited, we need to decrease the Mass (weight) to be able to stop without fading the brakes.

However, runway up-slope will actually help the aeroplane to stop, therefore the brakes will not have to absorb so much energy and the allowed mass will be higher. With a runway down-slope it is the opposite A down-slope will degrade the stopping capability of the aeroplane and therefore the brakes will have to absorb higher energy => brake energy limiting take-off mass will be decreased.

I think in fact that The Brake Energy Limited T/O Mass is mostly dependent on the Decision Speed (V1). 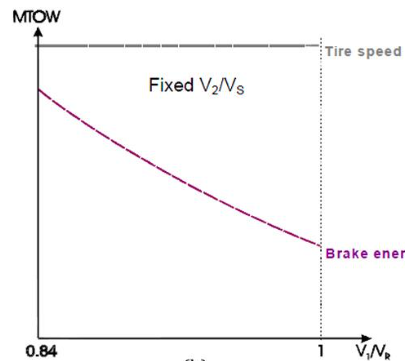 "A maximum V1 speed, limited by brake energy (VMBE), exists for each TOW, this is why it seems to grow more limiting as V1 increases. To achieve a higher V1 speed, it is necessary to reduce TOW"

2
How far can a Super Hornet fly at max supersonic speed in a clean configuration?
3
Why $\frac{\Delta p}{\overline q}$ is depending by weight, flap deflection and other parameters? Which are other parameters?
6
Under which conditions is full rated power instead of METO power required for takeoff (DC-3/C-47 with Pratt&Whitney 1830 twin wasp engines)?
0
How many tendencies are affected by Gyroscopic precession for single propeller airplane?
14
What is an airliner's "green dot speed", and how does it vary with weight, and why?
4
How can L/D Max be both Best Glide speed and Max Range speed?
1
How do power and thrust curves compare?