Has anyone attempted to board a flying aircraft mid-air?

Has anyone ever attempted, either via docking two aircraft together, using cables, parachuting on top etc., to get from one flying aircraft to another mid-air?

Sure. It was regularly done by the aerialists or barnstormers of flying circuses during their heyday in 1920s.

Barnstormers performed a wide range of stunts. Although many of them handled all their own tricks, others became specialists, either stunt pilots or aerialists. Stunt pilots performed daring spins and dives with their planes, including the well-known loop-the-loop and barrel roll maneuvers. Aerialists, on the other hand, performed such feats as wing walking, soaring through the air with winged costumes, stunt parachuting, and midair plane transfers.

These were mostly done using army surplus biplanes after WWI. The performers boarded aircraft from a variety of vehicles, from cars to speedboats. This ticket for one of the performances clearly mention the midair plane transfers. 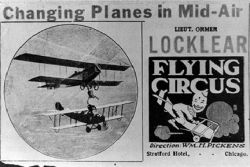 Ticket for a flying circus; Image from all-things-aviation.com

As time went by, lack of cheap aircraft and tightening federal regulations put an end to barnstorming. I'm not aware of anything like that in modern times. Anyway, mid-air transfers are not easy and are quite dangerous, as Simon Crane found out while shooting for Cliffhnager.

20
How did aircraft communicate during early air travel?
14
Has a C-130 ever been designated as "Air Force One"?
3
Has anyone attempted to recreate the Sack AS-6 (German Saucer-wing)?
10
What is the largest aircraft that has been flown inverted successfully?
23
Which fixed-wing aircraft has the highest number of required flight crew members?
19
Has anyone ever been penalised for buzzing a control tower?
5
Has a small airplane ever been air launched from a heavy-lift helicopter?
16
Can anyone identify the aircraft in the background of this photo?