Do modern flights and pilots have reservations about flying over the Bermuda Triangle?

I know that the Triangle was pretty much legend back in the days but now, given that there is so much technology involved with respect to tracking and communications, do pilots, flights and airlines still have reservations about flying over this area? If so, why, and if not, are there regular flights/airlines that go over this route every day?

A quick check of a site like Flightradar24 will show that the area is not overly avoided. The triangle between the southern tip of Florida, Bermuda, and Puerto Rico has quite a bit of traffic.

The southern part is a busy route from Florida to Puerto Rico and other areas in the Caribbean. The rest is also part of routes from the east coast to the Caribbean and South America.

While the idea of an area causing mysterious disappearances is understandably popular, evidence suggests that the area has not been significantly more dangerous than other areas in the world. As noted, it's an important route between Florida and the Caribbean, and one would expect lots of traffic in this area, and therefore lots of incidents.

While navigation issues were once a not-infrequent cause of air incidents, modern technology has made this sort of thing much more rare. Airline flights are monitored by ATC. Anomalies in either magnetic bearings or radio aids such as VOR or GPS are routinely surveyed and listed on navigation charts. I took a quick look and nothing seemed to stand out here. Weather forecasting has also become much more helpful with the usage of long range weather radar and weather satellites.

A look at incidents in this area shows most incidents were in the 1960s or earlier. The few recent air incidents seem to be nothing out of the ordinary. General aviation accidents are fairly common (flying into a level 6 thunderstorm also not advised), and airliners divert due to technical issues fairly frequently.

While some people may have apprehensions about the area, this concern doesn't seem to be supported by a higher than normal rate of incidents and the area is routinely traveled by both ships and aircraft. 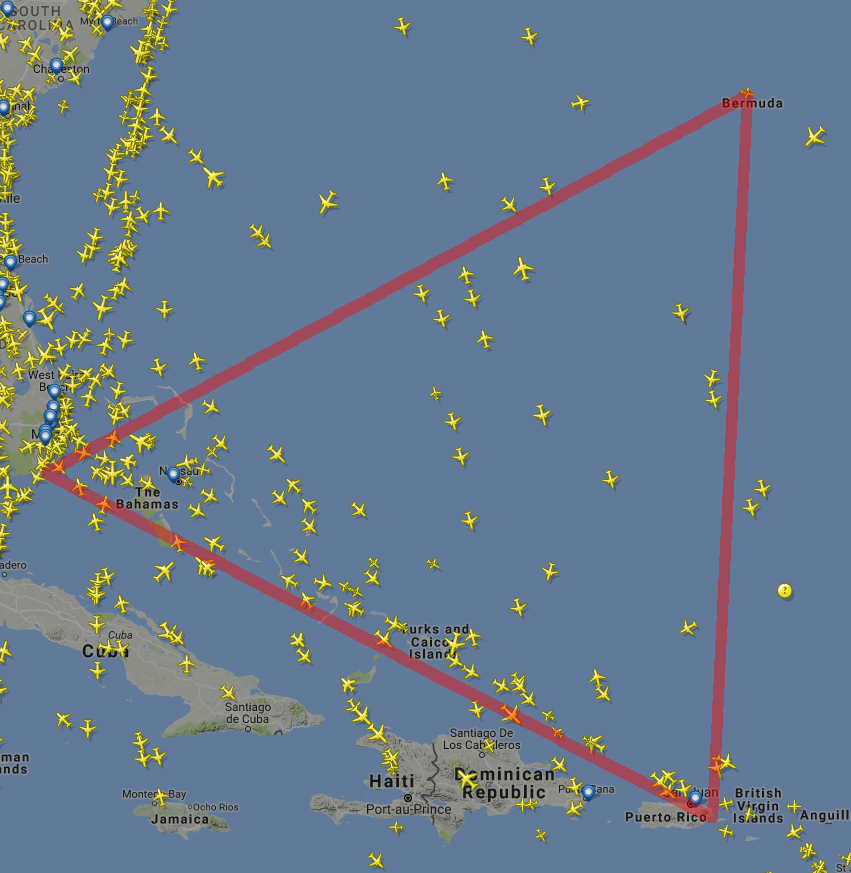 Don't worry about that question mark, I'm sure it's totally routine, nothing to see here

I flew a C172 into the Bermuda Triangle (Bimini) with my family aboard on my Commercial license qualifying flight in 1976 and never gave a thought to the supposed "danger" flying there.

Not the answer you're looking for? Browse other questions tagged airline-operations flight-planning pilots flight-path or ask your own question.

27
How do airlines pay air crews for an aborted flight, in general?
8
What do airlines do with planes at the end of a multi-stop route?
15
Why have different flights with the same flight number?
12
How do airlines handle SIGMETS?
30
Why does Turkish Airlines avoid Israel when going to Amman, but not on the return leg?
12
How many airport charts do airline pilots have in the cockpit?
4
Is it possible to know why an airline operates specific equipment on certain routes?
4
Does FedEx use other airlines?