Why are these carrier aircraft landing with the canopy open?

I was reading this answer here Aviation.SE, which includes the following video of multiple F7U-3 Cutlasses landing aboard the USS Hancock in 1955 (warning, video includes footage of a fatal rampstrike):

I notice that each and every pilot is landing with the canopy open. Why is this?

I'm not a pilot, so these are uneducated guesses:

It could be opened for visibility reasons, except I'm guessing it'd be forward visibility that's be most important, and the sliding canopy doesn't do that any obvious favors. And according to Wikipedia, the plane's high cockpit was already designed for good visibility for carrier landings.

My other guess would be that the canopy is opened in case of a bad landing/fire (less bad than the rampstrike later in the video), and the pilot has to get out in a hurry. But I doubt it'd make a huge difference as the pilot's (presumably) still strapped in. And if he can open the canopy while on approach to a carrier landing, it's probably fairly straightforward.

Last guess would be that it's in case the pilot has to eject, yet he should be able to do that, open canopy or no. Besides, the seat would still hit the canopy upon ejection, it seems - maybe just-in-case to avoid the pilot's head hitting first?

Because it is the standard operating procedure, not only for this aircraft, but also for others. In the book U.S. Naval Air Superiority: Development of Shipborne Jet Fighters - 1943-1962, [Tommy H. Thomason notes](By Tommy H. Thomason):

Leaving the canopy open for landings and takeoffs would still be standard for many years as it facilitated egress in the event of a water landing.

Here's the Grumman F9F Panther, one of Navy's first jet fighters landing with its canopy open: 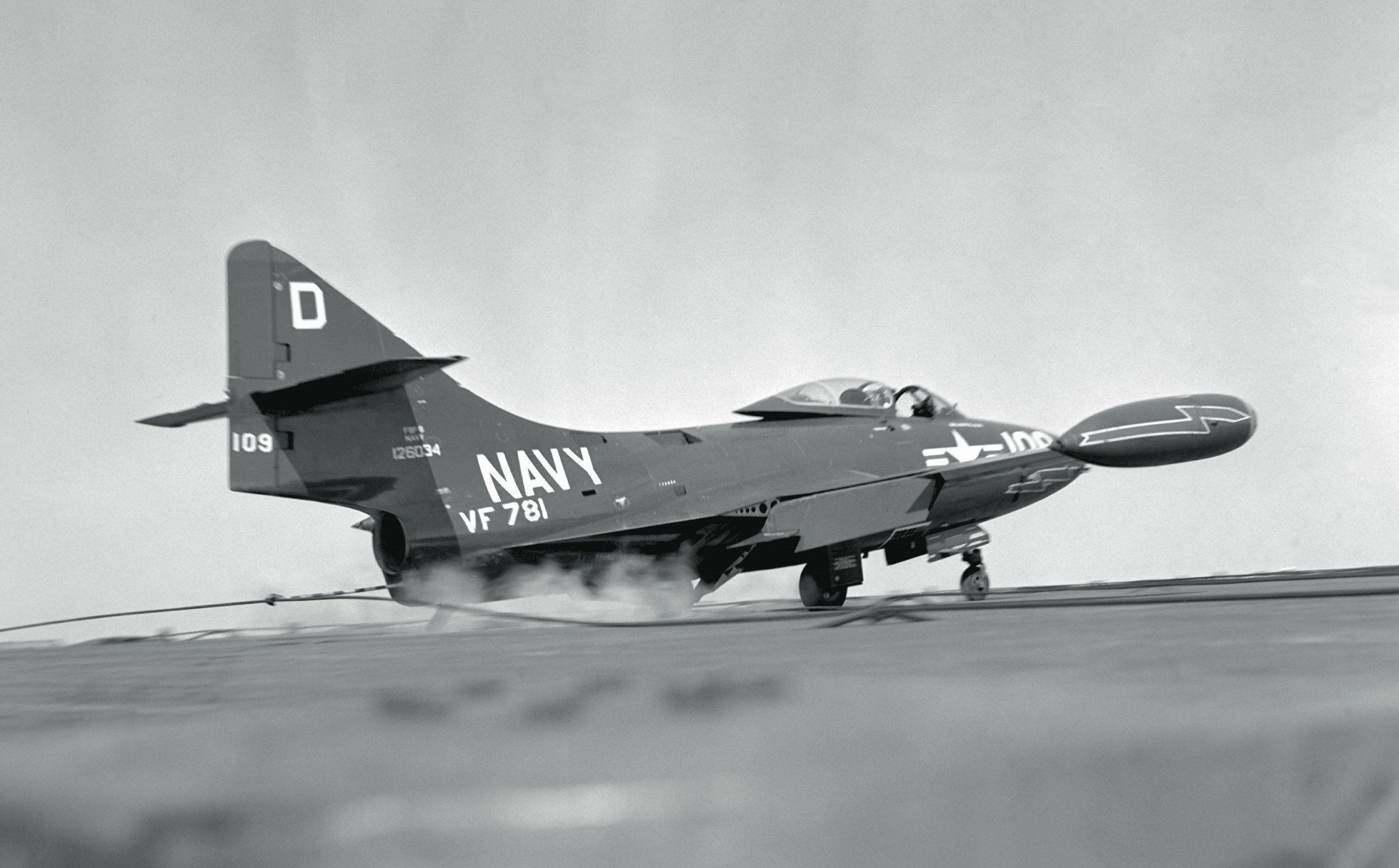 This followed through the time of Cutlass, as thanlont.blogspot.in notes:

The ... F7U pilots all have their canopies open for landing. Although open canopies for carrier takeoffs and landings had been standard since canopies were introduced, this became pilot's choice on straight-deck carriers at some point following the addition of the barricade ... after an incident or two when the upper strap of the barricade went into the cockpit of a crashing jet. Note that the FJ-3s are taking off with open canopies.

The above answers are right; it's done to facilitate quick evacuation of a jet in case of an emergency or a liquid landing. Modern carrier jets use jettisonable canopies along with a zero-zero ejection seat for quick evac and rescue, so having the canopy unlocked and open is no longer a requirement when coming aboard. Graphic example of what can happen if the canopy was not unlocked in an emergency was this tragedy aboard the British carrier HMS Victorious in 1958.

Not the answer you're looking for? Browse other questions tagged landing aircraft-carrier fighter canopy or ask your own question.

15
Why does this regional jet have its air brakes wide open before touchdown?