Why does wake turbulence sink?

There has been a remarkable story this week of a Challenger 604 business jet being rolled after encountering the wake turbulence of an A380.

A Challenger 604 at FL340 operating from Male-Abu Dhabi passed an A380 opposite direction at FL350, one thousand feet above, about 630nm southeast of Muscat, Oman, over the Arabian Sea.

A short time later (1-2 minutes) the aircraft encountered wake turbulence sending the aircraft into an uncontrolled roll, turning the aircraft around at least 3 times (possibly even 5 times), both engines flamed out, the aircraft lost about 10,000 feet until the crew was able to recover the aircraft, restart the engines and divert to Muscat. The aircraft received damage beyond repair due to the G-forces, and was written off.

I subsequently discovered that wake turbulence sinks; according to Wikipedia:

At altitude, vortices sink at a rate of 90 to 150 metres per minute and stabilize about 150 to 270 metres below the flight level of the generating aircraft.

Well, now I know where not to fly my business jet...

Lift is created by accelerating air downwards. The same goes for wake turbulence: The vortices form at the boundary between the downward-moving strip of air (wake) from surrounding air that tries to fill the void left by the wake.

Friction will eventually dissipate the kinetic energy of the wake, but in case of heavy aircraft the motion will continue for several minutes. By that time it will sink down hundreds of feet or hit the ground. This is driven by inertia; density differences do not exist unless the atmospheric lapse rate is above the adiabatic rate and the wake warms less quickly from increasing atmospheric pressure than the surrounding air.

In the end, the weight of any heavier-than-air vehicle is supported by an area of higher pressure on the ground. Some mechanism has to transfer the weight force from the flying aircraft to the ground, and that is the downward-moving wake. When it slowly dissipates, it will leave a slightly higher air pressure below it. When that happens at supersonic speed, the more focussed pressure change is high enough to be audible on the ground.

@PeterKampf's answer is (as usual) perfectly fine in and of itself.

I would add another way to look at it, more focused on the vortices you were interested in. One way of looking at the airflow is to imagine it is simply made of two opposite vortices.

Here is how it starts: the downash created by the wing provokes the creation of two wingtip vortices, easy to see in this famous image: 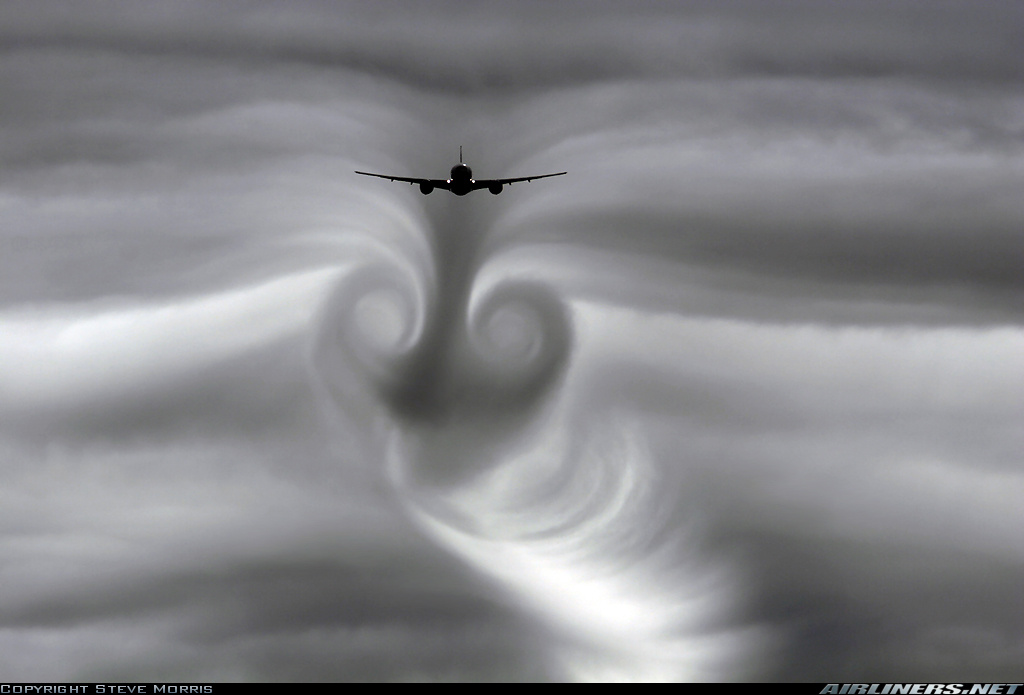 Now you can clearly see the vortices are:

Now the key is that they both interact with each other (vertices are mathematically additive):

Of course both impose a downward movement to the air in between (that's the downwash itself).

The combined effect is at T = T+1, each vortex will have translated the other some distance down. They will then be in the same configuration again (two opposite vortices, side by side and of the same strength), and so this keeps on going until they interact with the ground or dissipate into friction (viscosity).

This is just an other way of looking at the same thing as a vortex persistence is still the consequence of inertia. Also this schematic may help visualize flow speeds induced by each vortex (remember both speed flows are additive and must be superimposed: 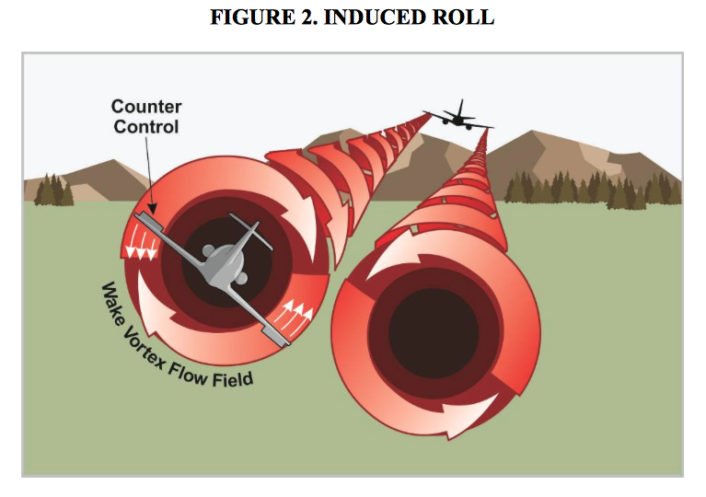 Edit: It is all based on the lifting line theory, particularly the horseshoe vortex. I've found few good videos of the swirl interactions. Here is one.

Since the two vortices are a full wingspan away, you can consider flow induced by the left vortex in the vincinity of the right vortex to be uniformly down. Speed is orthogonal to the offset to the center, so speed is straight down. That's not the case everywhere: above the vortex, speed is inwards. Below, its outwards. Speed beyond the wingspan is upwards. But those speeds in those regions are of no interest to the opposite vortex.

By the way, smokers can generate vortex rings. Those are the same phenomenon, just with cylindrical symmetry instead of planar symmetry. Or if you don't smoke, you can do those in a swimming pool (Yes, it's violin time!)

Not the answer you're looking for? Browse other questions tagged turbulence or ask your own question.

57
Is a winglet better than an equal span extension?
38
How does an aircraft form wake turbulence?
7
Does an aircraft landing on a carrier increase the carrier weight before it touches down?