Which countries (if any) allow beyond-line-of-sight drone use?

I was recently thinking about starting up a non-profit that would use large drones (full scale aircraft, not those dinky quadcopters) to deliver humanitarian aid to difficult locations.

It was shot down pretty quickly when I remembered that civilians aren't allowed to fly unmanned systems beyond [the visual] line of sight (BLOS).

So, this led me to my question, are there any countries that allow BLOS use of civilian unmanned aircraft?

The current situation (November 2018) regarding beyond visual line of sight operations (BVLOS) is heterogeneous:

EASA is the European safety agency. For EASA member states (EU and a few other countries), there are two opposite situations today:

With no surprise North European countries (Iceland, Norway, Sweden), with many isolated locations have allowed BVLOS operations early, including for delivery of goods to consumers, e.g. Aha, an online marketplace, delivers goods using drones in Iceland. Not only this is BVLOS, but it's even automated.

Many countries don't allow it but they are waiting for a EU regulation that would allow them. Actually current opinion of the EASA is it must be allowed (but more for industrial uses than for good delivery to public):

EASA will develop standard scenarios that will make it simpler to obtain authorisations for well‑defined operations (such as, for example, linear inspections conducted in BVLOS, or crop spraying).

In their declaration EASA mentions linear inspections, which has been actually something done in France since a long time for railways catenaries and electric grid lines.

France has kept with its pioneering role in aviation. BVLOS is regulated since 2012. A company located in Toulouse, another well known place for aviation, paved this road. As I'm not going to do their advertising, I let you read about them online, e.g. last year they were able to have a 50-km civilian flight with a 3G data link.

If you are asking for your home country, Switzerland, which is also an EASA member state:

LOS is required, but waivers are possible, though there are no public criteria provided, so you need to try, when you have defined all the details of your project.

As DeltaLima mentioned (maybe with a good insider knowledge) laws are rapidly evolving in the domain, as does UAV technology.

For countries that have drone regulations, these regulations typically incorporate a pilot’s license, registration of the drone, restricted zones, and insurance; regulation requirements vary based on such parameters as drone mass, population density, altitude, and use cases. 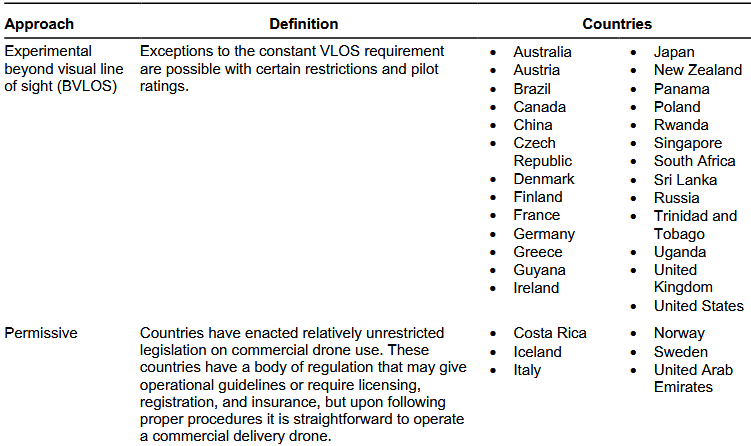 As visible there are legal possibility for BVLOS in many countries and across all continents.

For France already mentioned, we see the BVLOS is authorized up to 1 km for 2 kg+ mass, and unlimited below (but constraints like pilot license and registration still apply). Looking at the criteria for a permissive country:

Well, except height and insurance in certain cases, there is no other ones!

While B2B application have a large market, the B2C market is huge in an era of online sales and home delivery. Amazon is waiting for (experimentation in Japan), as quick food businesses do, for their delivery.

Not the answer you're looking for? Browse other questions tagged unmanned-aerial-vehicle regulations or ask your own question.

13
Can a drone travel beyond the range of its remote control signal?
4
Does a LSA or better license count for drone use?
2
Do any countries besides the USA accept Basic Med?
3
Are there any situations in which drones may legaly fly higher than 400ft?
4
Would this be a dangerous impeller to use for a drone?
7
Are there any plans to make the QF-16 into a drone for actual combat missions, or a fully autonomous fighter?
7
Would using a drone to pay for something count as commercial use?