What is the night effect?

I read the night effect takes place in radio navigation, especially VOR and NDB. My questions are:

The night effect is actually a mirage. Listening to radio communications originating from below the radio horizon is like looking at a looming:

Both are strange things, unless we force ourselves to take into account electromagnetic waves (including light) don't travel in straight line but are subject to regular refraction.

UV and X-rays from the sun create layers of ionized atoms in high atmosphere. Some of these layers have refractive properties, and one acts as a wall preventing waves from the ground to reach the refractive particles.

The night effect is the casual result of a favorable timing: There is a window after sunset where the blocking layer disappears, and the refracting particles are still active, albeit less active than on daytime:

Attenuated waves are redirected towards the ground during this period, possibly to a receiver located further than the horizon. In this phenomenon, ionized particles play the same role than hot air for looming.

As your question involves distinguishing several ranges of frequencies, let's make a brief summary of the RF spectrum. Radio frequencies (RF) are a small part of the whole electromagnetic spectrum, along with light and ionizing rays at work in the ionosphere:

RF themselves are divided into "bands" which properties are more or less different. It's sometimes impossible to settle whether a color is green or blue, or yellow or orange, the same is true for these bands, the limits are really not important in most cases. 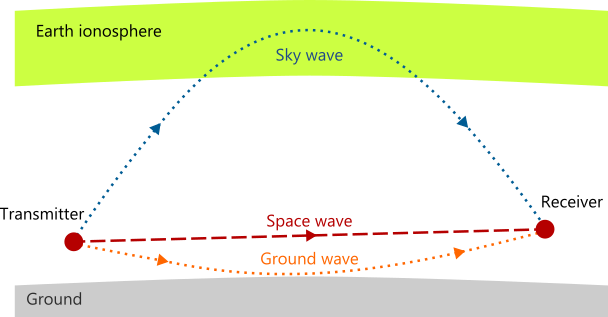 The night effect has its origin in the sky wave, so if you are not interested you may skip the two next sections.

Neutral atmosphere (below about 100 km) shows a gradual change in air refractive index, refraction constantly decreases with altitude. The consequence is the space wave is refracted and doesn't travel in straight line (Huygens-Fresnel wavelet principle), as often approximated.

This curvature is about the same for all frequencies in the RF range. When calculating the radio horizon for regular free space propagation, the standard is to use a radius for Earth which is actually 33% larger than the actual radius (4/3 k factor). With this radius, the line of sight can be represented as a straight line.

The ground wave propagation encompasses reflection on ground and obstacles, diffraction on obstacles and horizon, and refraction thanks to current induced in ground.

Because of the refraction and diffraction, this mode of propagation tends to follow Earth curvature, but it mostly affects LF and MF, higher frequencies (e.g. VHF and UHF) do not really take advantage of this propagation.

In ground propagation the wavefront is slowed down where it is closed to the ground. As the wave propagates perpendicularly to its wavefront, this more vertical wavefront can propagate further at ground level without creating shadows. 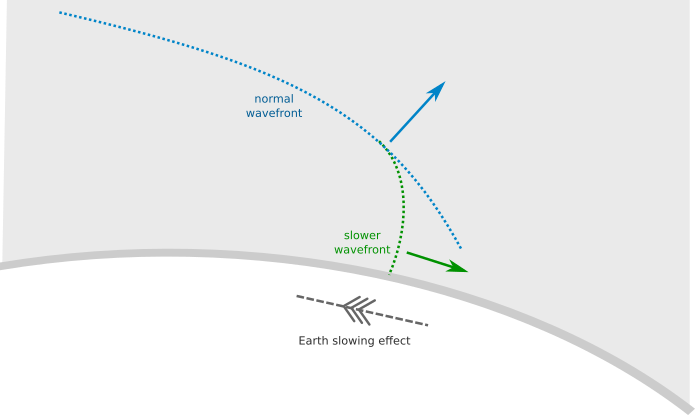 Atom ionization consists in losing or capturing one of more electrons, and becoming electrically unbalanced. Natural ionization occurs in the ionosphere under the bombardment of solar ionizing rays which detach electrons from atoms. This takes place in the F-layer at about 300 km, and in the E-layer at about 100 km. Waves can be affected by these layers when they are active.

A layer of ionized atoms makes an efficient refractive material for radio waves. However the lowest D-layer blocks waves during the day because of the ionization of heavy nitrogen monoxide $\small NO$) absorbing wave energy as they vibrate under the effect of the wave. This absorption decreases at night when the source of ionization disappears. 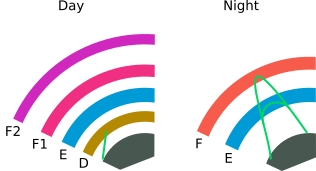 Reorganization of ionospheric layers at night

The higher layers are ionized more and more longer than the lower ones, and ionization persists more in the higher layers. The combined effects of D, E and F layers leads to:

Sky wave reflection on the ground and skips

There is a significant attenuation as the wave bounces back and forth, and in practical the signal is too weak to be used after one or two hops, unless the link is optimized for such operations.

Because the sky wave proceeds by hops, reception is favorable at specific distances from the transmitter and is characterized by minimums and maximums spaced along the direction of propagation, the distance between maximums depending on the frequency.

Sky wave extends significantly the range of LF/MF frequencies. Sky wave impact is less noticeable on VOR and DME range, even if there are exceptional / sparse episodes of VHF refraction by the E-layer (sporadic E). Past VHF there is no noticeable sky wave.

Formally the maximum usable frequency varies with solar activity and is given by the secant law.

As the propagation of NDB frequencies is augmented at night by the sky wave, a NDB can be detected at a greater range by a receiver. This is also true for other mode of communication in the same range of frequency (e.g. voice communication in HF over the oceans).

Because low frequencies are the only ones subject to sky wave propagation, over-the-horizon (OTH) radars use them instead of SHF. 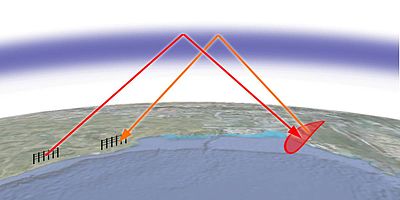 The sky wave propagation is associated with a slow variation, the signal can disappear and reappear a few seconds later. This is due to the instability of the refraction, the heterogeneity of the atmosphere layers, and the recombination of waves after a multi-path trip and a rotation of the polarization. This fluctuation is globally known as fading.

Errors introduced by the sky wave 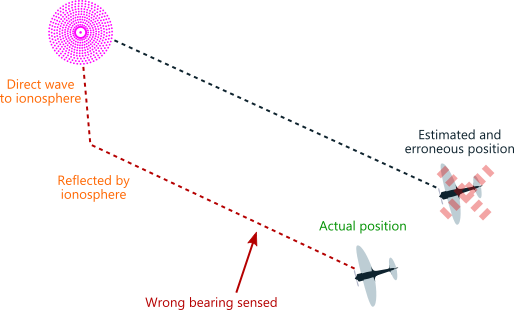 The beacon seem to move, and the bearing is not reliable. Some cross check is necessary to confirm the validity of a bearing.

Not the answer you're looking for? Browse other questions tagged radio-communications radio night-flying radio-navigation or ask your own question.

8
How are range and frequency related in HF communications?
9
Are there two navaids on the same frequency close enough to be confused?
5
What are the reasons for the particular range of VHF and UHF frequencies?

8
What is transmitting this radio signal @~110.515MHz and for what purpose?
13
OBI, RMI, HSI... What combination do GA aircraft w/o glass typically have?
4
How does a small aircraft like a Cessna fly at night?
9
How wide is the cone of confusion above a VOR and NDB?
17
Are NDBs and VORs dying as a navigational method?
7
How unusual were MH370's final ATC exchanges?
5
Is night VMC still VMC if the underlying terrain is completely unlighted?
6
Does pilot-controlled lighting work if you are interrupted by another voice transmission?
9
What radial is the aircraft crossing?