Could the crew of XL Airways Germany Flight 888T not hear important chimes, due to the stall warning?

I am intensively researching on XL Airways Germany Flight 888T at the moment.

I wrote and researched hours and hours. Now I would like to know something about the ECAM and the Airbus Stall warning:

The crew of 888T started a stall test with faulty AoA-Sensors. They wanted to test the stall protection system. At a point, the Airbus stall warning was played. A few seconds later, the control laws degraded to Direct Law. The crew missed this degradation and I just want to find out why.

I found out, a control law degradation is a level 2 ECAM warning. That means a single chime will be played. Can someone confirm this?

I also heard, the stall warning suppresses all other sounds, because a stall has priority over all other things. But I don't know if this also applies for the ECAM Sounds. Does anybody know if a stall warning really suppresses every sound?

When the stall has developed the aircraft is no longer in normal control law for any axis (see more in FCTM at OP-020. P 14):

As soon as the aircraft is outside the flight envelope, the control laws transition to abnormal attitude which is the combination of:

This is something between alternate and direct, and is intended to allow the crew to recover from the abnormal attitude and reenter the flight envelope without being prevented by some protections.

A stall (an excessive angle of attack) is one of the conditions to switch to the abnormal attitude laws. You may read this article too, while on a simulation site, it is very well written. There is also a presentation on SKYbrary at Eurocontrol.

When the stall warning aural warning is active (voiced "Stall" and cricket), the crew is expected to know they are in abnormal law.

Reconfiguration in abnormal attitude law is indicated by different clues on the PFD (e.g. $\alpha$ prot and $\alpha$ max indication removed from the speed strip, and green = replaced by amber crosses). 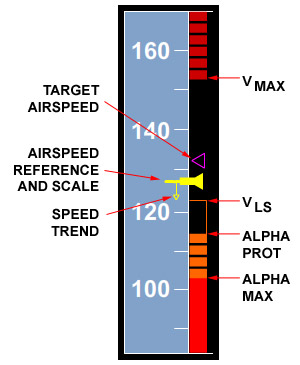 and the master warnings are activated. The aural alert is a single chime, (level 2 failure confirmed in this report, page 25). The reconfiguration is also indicated on the ECAM, but the indication can be moved towards the bottom of the list if messages with higher priority arrive.

The law is reconfigured as direct when the landing gears are lowered.

Regarding the aural warnings associated with stall and law reconfiguration, they are audible at the same time, or are intercalated, but none cancels the other, as it was heard for AF447 and reported in this article (C-chord is the single chime):

In sequence the alarms were sounding PULL UP, C-chord, STALL, C-chord, PULL UP, PRIORITY RIGHT.

Not the answer you're looking for? Browse other questions tagged airbus-a320 airbus ecam or ask your own question.

15
Is a Control Law Degradation in Airbus Planes displayed on the ECAM?

4
What exactly happened with the Flight Computers on XL Airways Germany Flight 888T?
15
Is a Control Law Degradation in Airbus Planes displayed on the ECAM?