Is this a famous aviator / airplane?

This may be a little off topic but I could not find a better community or website.

I have two photo postcards with a man in front of a plane. Pretty sure it's Charles Lindbergh but an exhaustive Google search for anything related visually has only turned up another picture of CL with a similar jacket on. So is this who I think it is? Can anyone come up with a "verifiable" narrative to accompany these photos? Perhaps the type of plane in the background? 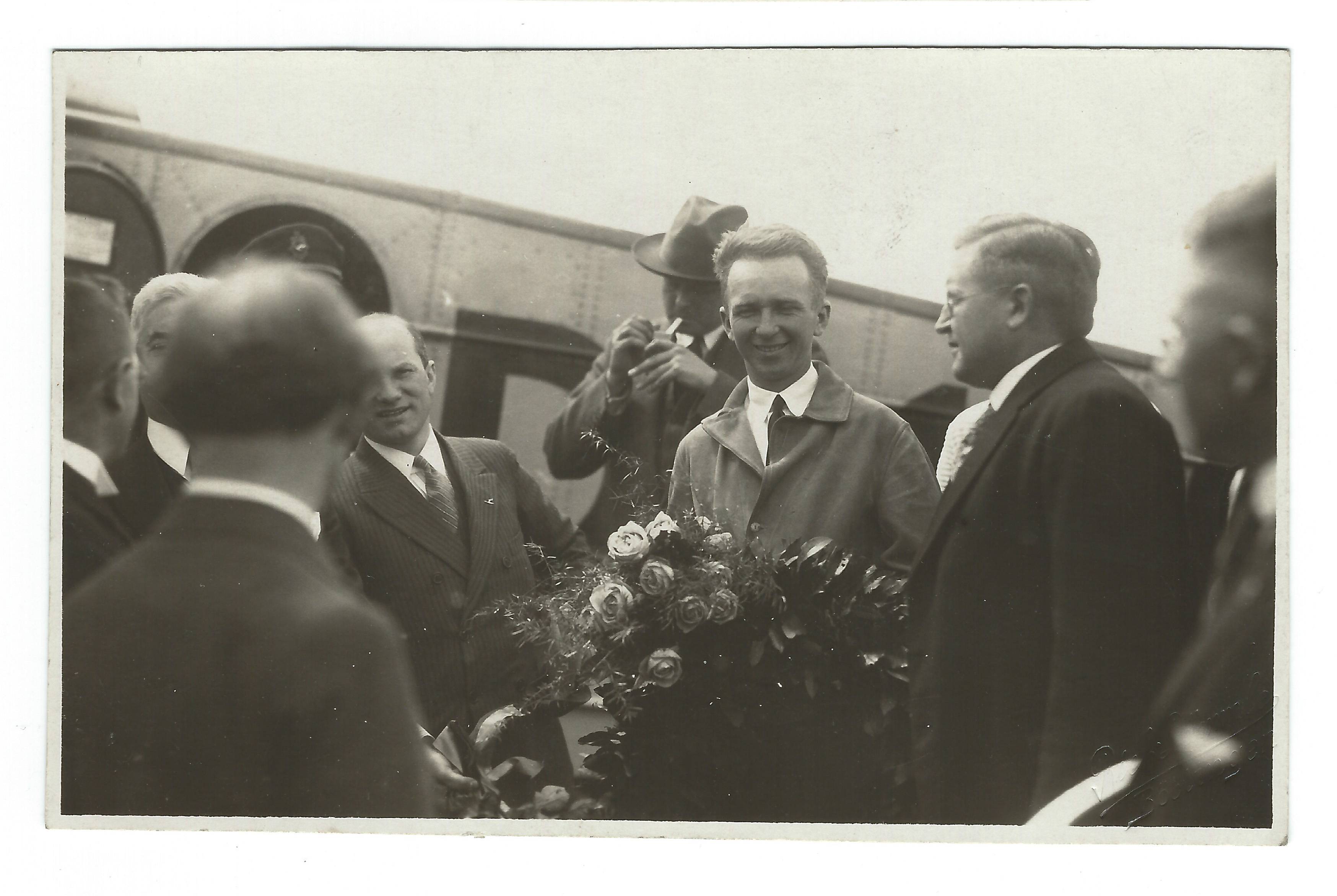 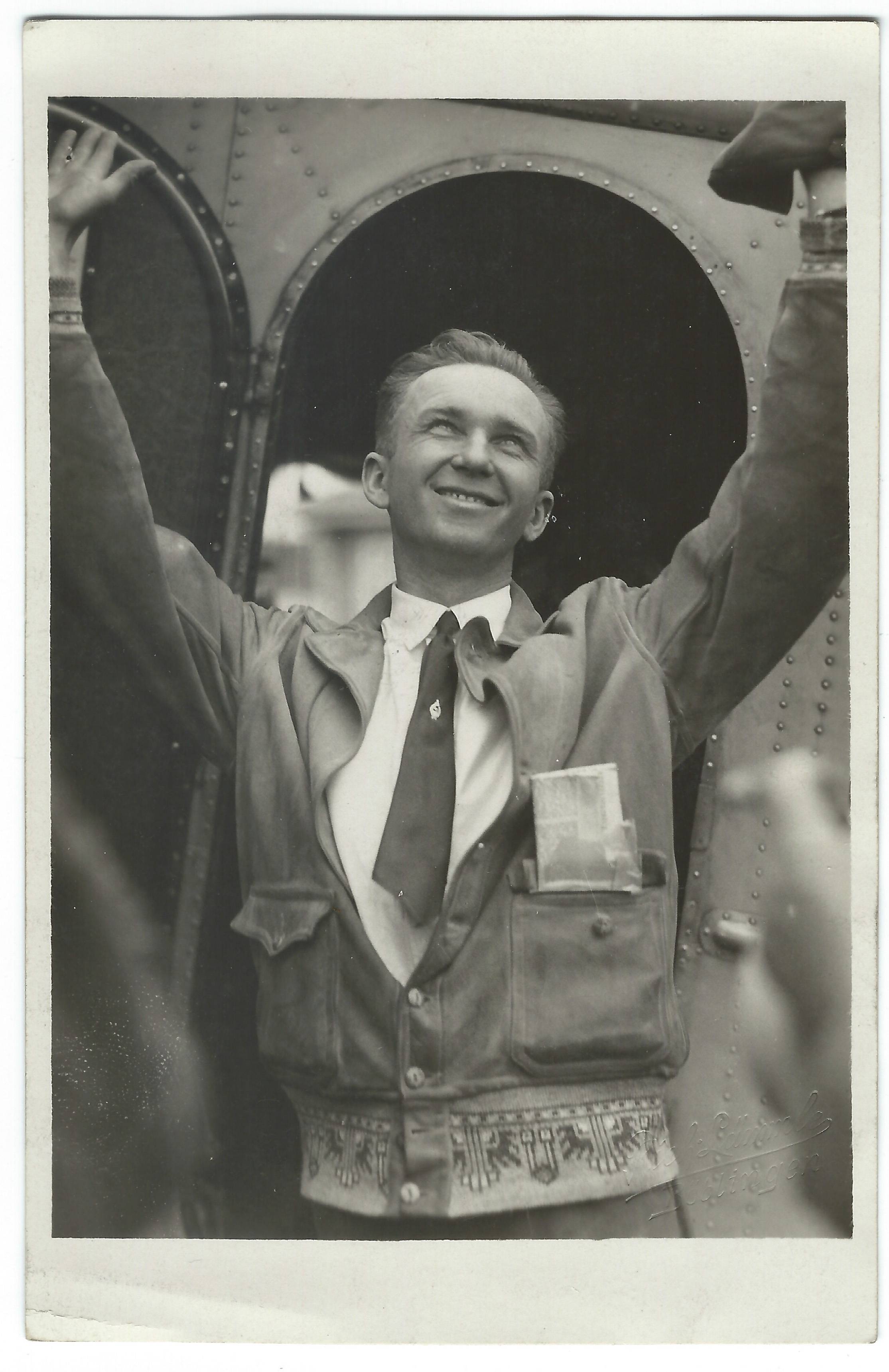 The pictures are of Clarence Chamberlin, after he landed near Boeblingen in 1927. Thanks to Omegacron for pointing out this website, which also has the exact same picture as the 2nd one you have. https://www.boeblingen.de/,Lde/start/WirtschaftEntwicklung/Chamberlin.html

Notice the similar bouquet of flowers, postcards in his front left jacket pocket, and how his jacket is buttoned. 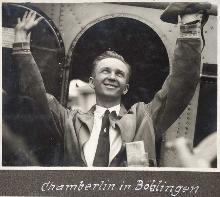 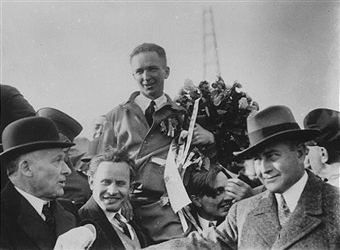 Thanks to the research of the other two answers, I finally found the context for these two photos. They are indeed of Clarence Chamberlin (a contemporary of Lindbergh) and were taken on June 15, 1927 at the Stuttgart-Boeblingen Airfield in Germany. The following page describes the events leading up to the photos, although the original is in German:

Long story short, he was attempting to beat Charles Lindbergh on the transatlantic record, but Lindbergh won due to numerous delays. Chamberlin decided to go a little further, to Berlin, and beat the distance record instead. There were numerous technical problems with his plane, however (the Miss Columbia), and he ended up having to land in Eisleben, about 90 miles west of his goal on June 6, 1927. After a day spent repairing the plane, he then proceeded to Berlin. The event seen in the photos is a parade/celebration thrown in his honor as he leaves on the 15th.

By comparison, here's a photo from the same event showing Chamberlin in the same clothes: 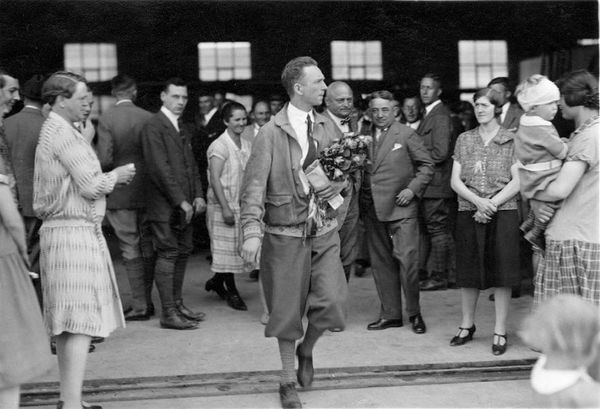 I was unable to identify the specific plane behind him in the photos, but it was NOT the Miss Columbia. Due to the many technical problems experienced during the race, Chamberlin elected to return by sea. What we see in the photos is him about to board a passenger plane that will take him to the ship. As far as I can tell, the Miss Columbia was shipped back separately, although his co-pilot (and the plane's owner) Charles Levine wanted to fly it back despite the problems.

What About the Plane Type?

The plane that Chamberlin is boarding in the photos looks to be a Dornier Mercury, which was a common passenger plane in Germany at the time. The door size/shape and top of the plane (what we can see, at least) match up quite nicely. Here's a shot of one from a similar angle:

Thanks to @TomMcW for finding that. 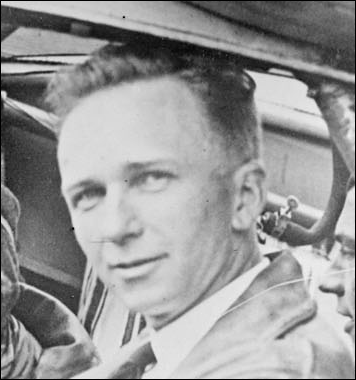 I may be wrong, but it looks very like Clarence Chamberlin; the Wikipedia picture is quite small, but if you look at some other pictures you can see a very strong resemblance. According to Wikipedia he carried the first transatlantic passenger, flew an aircraft off a ship, and was a famous barnstormer. So there are plenty of reasons why he could have ended up on postcards.

I don't know what the aircraft is. Wikipedia says that Chamberlin's most well-known aircraft was Miss Columbia, a Wright-Bellanca WB-2. But the pictures of it show it has a square door under the wing, whereas your pictures show a rounded door rear of the wing. He was also associated with the "Curtiss Condor CO" (a Curtiss T-32 Condor II?) but again, it doesn't seem to match visually.