When calculating takeoff performance why include airport elevation in pressure altitude?

When calculating the pressure altitude for aircraft performance I learned to calculate it the following way:

So at an airport at 3000' elevation and an altimeter setting of 29.92" I can expect the aircraft performance to be that for 3000'. I never questioned that but now I wonder why don't we just care about the altimeter setting? If the altimeter says the station pressure is 29.92" sea level, but I am at 3000', then the airplane still thinks it's at sea level when it comes to performance. Is that wrong?

QNH is the atmospheric pressure adjusted to sea level.

So, a reported QNH of 29.92 means the pressure is 29.92 inHg at sea level, regardless of the reporting station's elevation.

If you're on ground at 3,000' MSL, you can rotate the knob to display 0' altitude, the pressure reading then on the altimeter window will be QFE (Field Elevation). 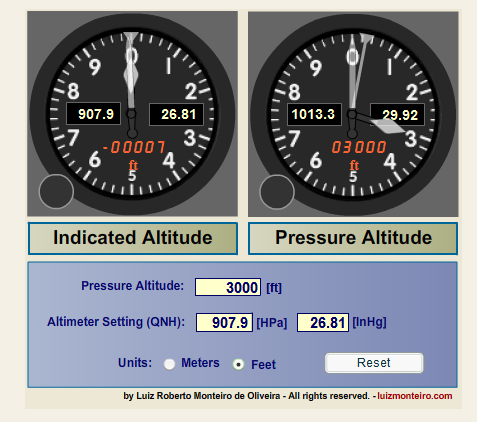 QFE should roughly be equal to the real outside atmospheric pressure.

Related: Why is Cessna 172 POH performance chart based on Pressure Altitude and Temperature instead of Density Altitude?

If the altimeter says the station pressure is 29.92" sea level, but I am at 3000', then the airplane still thinks it's at sea level when it comes to performance. Is that wrong?

Although the station pressure may be reported as 29.92", that does not mean that a barometer there will show that as the current pressure. The reported value is the actual pressure, plus an extra amount that is calculated would occur if the recording station were lowered down to sea level. Instead of actual pressure, you are setting the QNH pressure.

So sitting at a 3000' airport with the altimeter reading 29.92 does not mean the airplane thinks it's at sea level. Certainly the altimeter doesn't think this, because it's reading 3000'.

You could use the actual pressure outside as an altitude-independent performance gauge, but you don't normally have that value (and ATC isn't going to radio it to you).

Another way to complement ymb's answer - if you set the altimeter to zero as in the picture on the left, you will get the static pressure at the field - your altimeter will then read AGL and not MSL - and we fly MSL - one way to think of why we put the sea level pressure in the Kollsmann window is that we are making that air inside the aneroid wafer equal to the pressure at sea level - the altimeter should read within 75 ft of field elevation - as the airplane rises, the static pressure decreases, causing the wafers to expand - so the starting point (field elevation) is then adding feet as the aircraft rises.

6
Does density altitude affect actual altitude?
9
When is QFE used?
8
Why is Cessna 172 POH performance chart based on Pressure Altitude and Temperature instead of Density Altitude?

2
Is it possible to calculating sea-level pressure with an unknown base station altitude?
9
When is QFE used?
6
How do I calculate density altitude by hand?
6
What formula to use for calculating pressure altitude?
5
Why are the airport pressure values for "altitude" (inHg) and "sea level" (mb) slightly different on the NOAA web sites?
13
Why did Concorde have a 8000 ft airport elevation limit?
1
Why doesn't temperature affect Pressure Altitude?
2
Is the true altitude always lower than the indicated altitude as long as a correct local altimeter (QNH) is set on the altimeter?
1
Station pressure vs. reported altimeter