Is a Control Law Degradation in Airbus Planes displayed on the ECAM?

I would like to know if there is any warning displayed on the ECAM, when control laws get degraded from, let' say normal to direct law, other than the small text on the PFD.

Also if there are any sounds played in the cockpit.

This is because I am at the moment intensively researching myself on XL Airways Germany Flight 888T. Have there been any software updates, that tell the pilot if the laws are getting degraded since then?

Maybe even because of that crash.

Since you are trying to understand how the crew is aware of law reconfiguration, it's important to look at this event in its context, why it does happen and what are the consequences for the control of the aircraft. You may skip this overview and go to the direct answer to your question which is in the last section of this post.

The crew and the FMGS (autopilot) send commands to redundant computers:

and computers send commands to actuators. 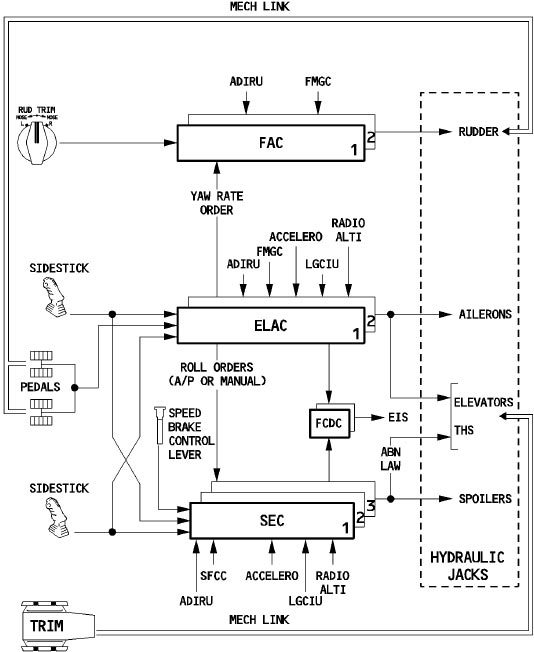 When the system is fully functional, all computers work using a normal law and it provides protection against:

This can be done by receiving aircraft dynamic data from multiple sensors visible in the diagram.

If a flight control computer fails (or stop receiving required data), the crew receives an indication on the overhead panel:

When one or several of those computers fails, the role of the remaining ones are redistributed.

Reconfiguration of the computers

The failure of an element of the flight control system needs that other available elements compensate for the missing computer or peripheral. This reconfiguration allows available computers to control an additional axis using other laws. However departing from the normal law for an axis means losing one or more of the protections available under the normal law.

The mechanical mode is a backup mode to control the tail surfaces from the pedals and the pitch trim wheels in case something prevent actuators to work (e.g. loss of all electric power sources before the RAT is deployed). 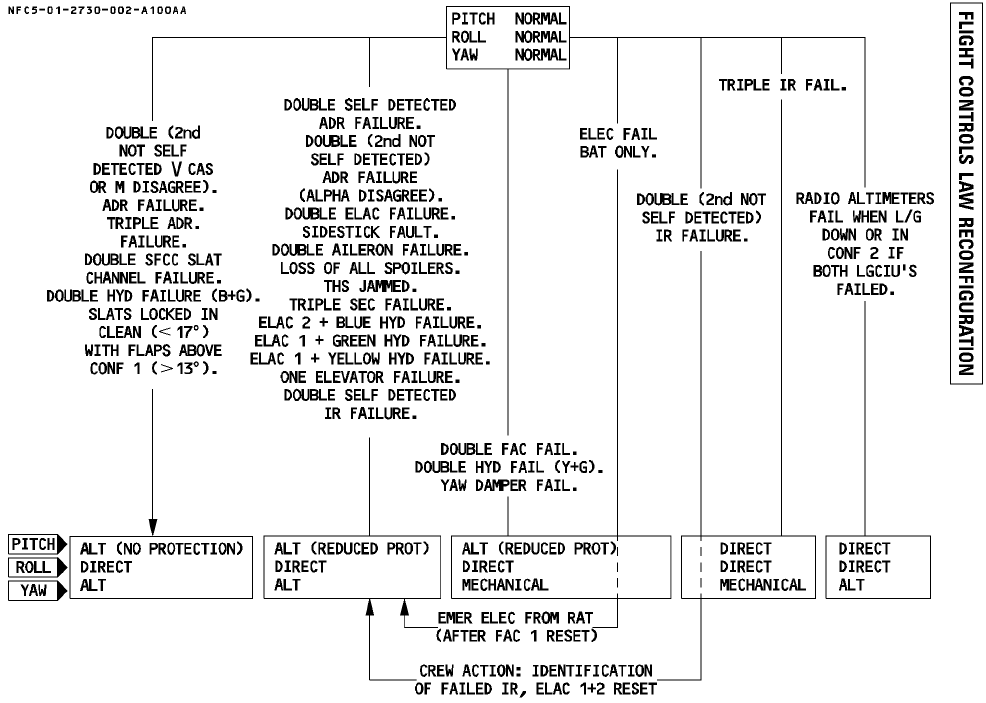 Alternate and direct control laws modify the relation between the stick movement and the flight control movement (linearity and amplitude).

After the flight control system has transitioned to an alternate law, some protection may be available, but law may also transition again according to events representative of the different phases of the flight. Here is what happens around alternate law on pitch axis, which a change to direct law as the landing gear is extended: 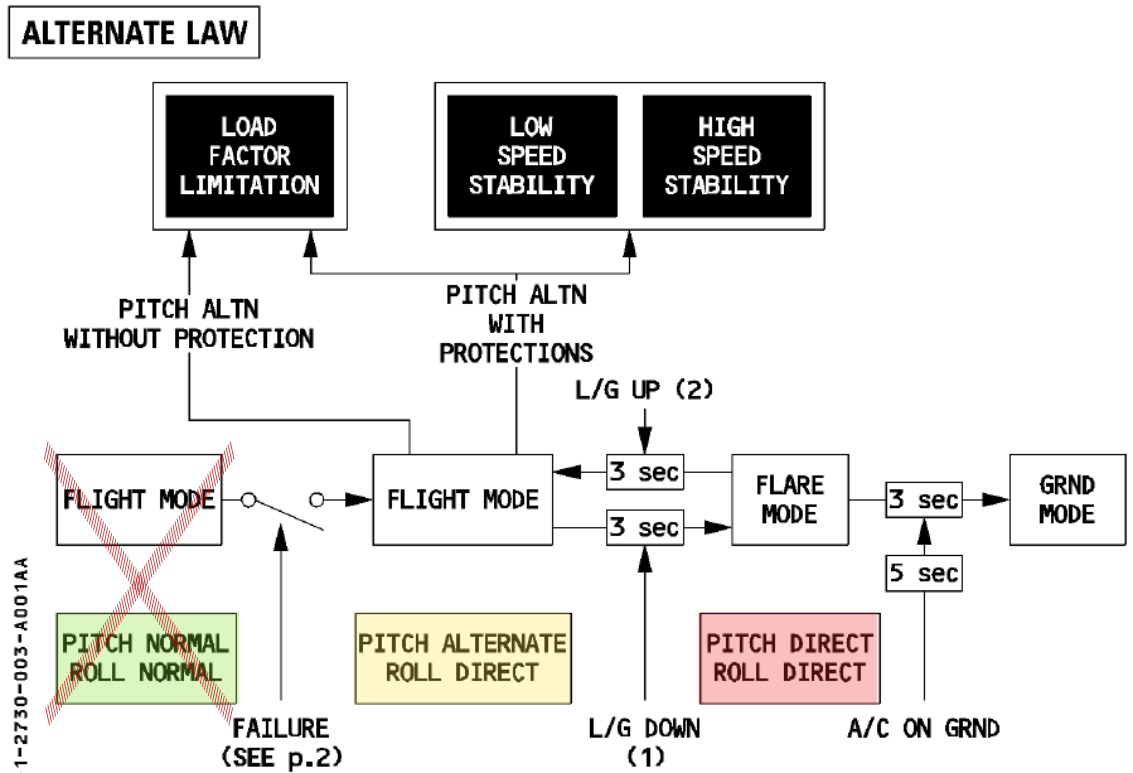 While alternate law on a given axis still maintains (under some conditions) some level of flight envelope protection, this protection is lost when degrading to direct law. According to the axis, the direct law impacts are:

Loss of protections after the degradation from normal law is indicated by amber $\sf \color {orange} {\text {x}}$. 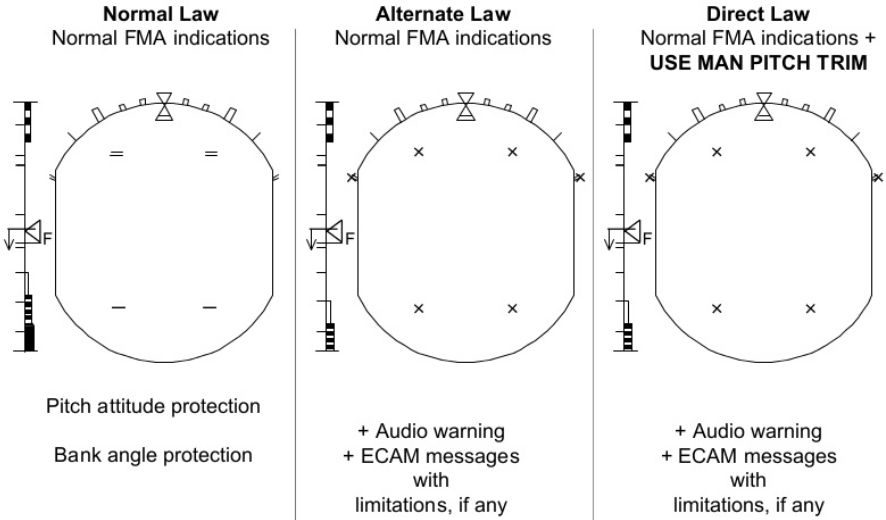 When the direct law is in effect for pitch the amber warning $\sf \scriptstyle \color {orange} {\text {USE MAN PITCH TRIM}}$ is displayed below the lines of the flight mode annunciator.

In addition if the law transitions to mechanical backup (which is supposed to be a transitory state), a red $\sf \scriptstyle \color {red} {\text {MAN PITCH TRIM ONLY}}$ replaces the amber indication.

Audio chimes are triggered at the time of a component failure, when the mode changes. Alerts also activate either of the overall alerting lights (master warning and/or master caution).

Failures and law activation trigger messages on the ECAM, with suggestions for crew actions.

However, and this was noted by investigators on AF447 accident, ECAM messages can be shown or hidden in the scrollable list according to messages priorities, due to the high number of messages that may appear in a short period of time during such sequences of events: 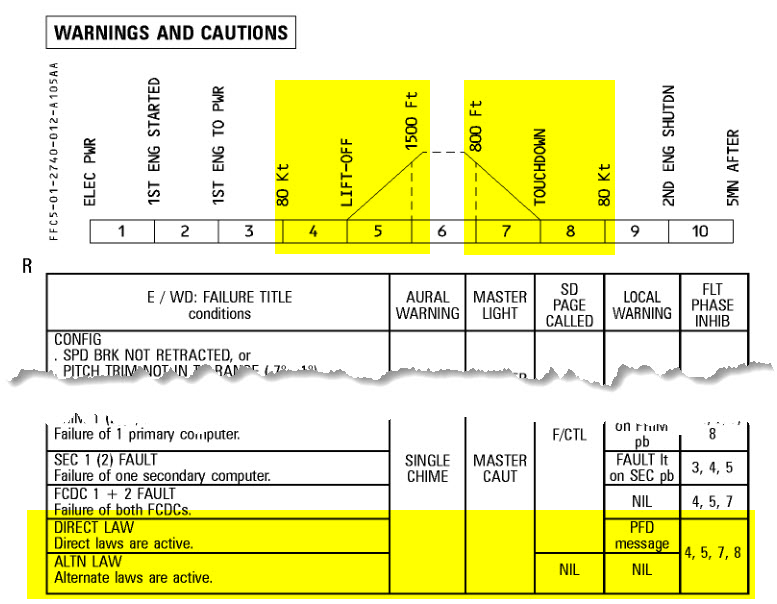 Edit: While this table is from the A340 manual, it's the same for the A320 for the following:

Same as above except:

Overhead buttons also have different modes of illumination, once the aural warning and master caution light are activated, with Airbus' philosophy of a dark cockpit, seeing lights on the overhead will offer a quick diagnosis.

Not the answer you're looking for? Browse other questions tagged airbus ecam or ask your own question.

17
How does envelope protection work in Airbus vs. Boeing aircraft?
5
Could the crew of XL Airways Germany Flight 888T not hear important chimes, due to the stall warning?
3
What are the differences between direct law and mechanical back-up?
3
What are the main components of the Airbus fly-by-wire system? Is ECAM related to FBW?

18
What improvements did Airbus make as a result of the Air France 447 accident?
1
In Airbus flight control laws what does it mean that “control sensitivity depends on airspeed”?
24
Do Airbus pilots have to practice flying in alternate law?
5
Could the crew of XL Airways Germany Flight 888T not hear important chimes, due to the stall warning?
3
What are the main components of the Airbus fly-by-wire system? Is ECAM related to FBW?
4
Were Airbus planes always fly-by-wire?
5
What sort of sensors are used for sensing the positions of the control surfaces for the ECAM F/CTL page on Airbus aircraft?
0
What are the amber triangles on the ECAM bleed page on an A320?