Is a compressor blade slowing down the airflow or accelerating it?

When a jet aircraft flies at maximum speed, are compressor blades actually a barrier to the air flow, or is the airflow accelerated by the compressor?

are compressor blades actually a barrier to the air flow, or is the airflow accelerated by the compressor

These are not exhaustive alternatives. Keep in mind that subsonic fluid flow when constricted accelerates and pressure decreases (Bernoulli's principle).

What the compressor does is increase the pressure. The speed decreases slightly.

are compressor blades actually a barrier to the air flow

Actually it's complicated. In a sense they are. The compressor always takes the air at around M0.5 irrespective of flight speed. That means at slower speed the engine needs to suck air from wider stream while at higher speeds some air is spilled over the intake lips. So in a sense, the compressor is a barrier.

But then, the compressor must increase the energy of the stream, otherwise the engine could not produce any thrust. Just the energy goes in pressure, not velocity. So in this sense it is definitely not a barrier.

In fact, the thrust acts mainly on the compressor, because that is the most significant aft-facing surface on which the pressure in the combustion chamber can act.

At supersonic speed it works differently. Now pressure changes can't affect the flow upstream, so the air can't be spilled over the intake lips anymore. Instead now the intake must decelerate it by shock waves and then expansion in a diffusor.

This is needed, because turbomachinery only works well in subsonic flow¹. Since pressure increases as the flow speed decreases, this also increases the overall pressure ratio of the engine and thus its efficiency.

Note that the air also heats up, via adiabatic heating, as it slows down and compresses. Somewhere around M5–6, the air becomes so hot from the compression that adding more heat to it by burning fuel is no longer practical, so above that speed, the combustion must occur in supersonic flow. This is the scramjet engine. It does not have any compressor or turbine, because it gets all the compression from constricting the flow and it turbomachinery wouldn't work at that speed anyway.

Jet engine axial type compressors rotor blades do accelerate airflow. It is important to note that the net speed change in velocity is usually negative, that is, airflow through the compressor section taken as a whole is usually slowed. Additionally, the engine intake generally slows airflow as well while increasing pressure. This occurs within the airflow prior to direct contact with the compressor.

Jet engine axial compressors are comprised of multiple pressure stages with the primary design of increasing pressure, not velocity. Each pressure stage is comprised of pairs of rotors and stators. The rotors consist of rows of compressor blades arranged radially on a rotating spindle. The stators consist of fixed rows of vanes arranged radially and placed after and between the rotors.

The compressor blades of the rotors accelerate the airflow and impart a momentary velocity increase. Subsequently, the stator vanes and the decreasing geometry of the compressor design slow the speed and change the airflow direction (which is also an acceleration). Each pressure stage raises the pressure, typically with a small net decrease in speed.

The task of an axial compressor is to raise air pressure rather than air velocity. Therefore, each compressor stage raises the pressure of the incoming air while the air's velocity is alternately increased then decreased as airflow proceeds through the compressor. The rotor blades slightly accelerate the airflow, then the stator vanes diffuse the air, slowing it and increasing the pressure. The overall result is increased air pressure and relatively constant air velocity from compressor inlet to outlet. 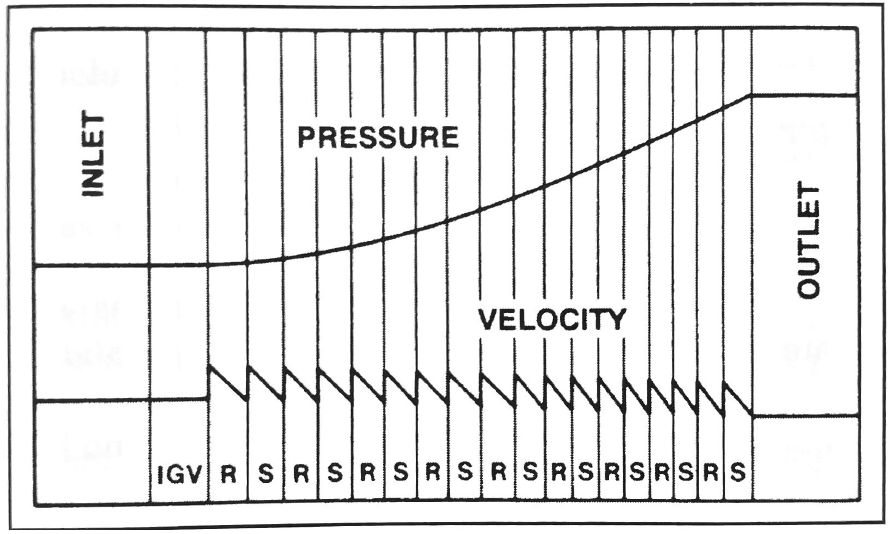 If we assume the overall cross sectional area of the gas passage through the stators and rotors in the compressor does not change (this is usually not the case) then the gas flow would have to slow.

Since Mdot and A remain constant and P increases, vdot must decrease to compensate. While temperature does increase, it is not enough to compensate for the change in pressure, which can be shown with a sensitivity analysis.

Ideally you want to decelerate the gas flow as little as possible as the decrease in momentum creates a drag impulse upon the engine. Both centrifugal and axial ompressors narrow in volume as gas flows through the core to reduce this.

Not the answer you're looking for? Browse other questions tagged jet-engine compressor or ask your own question.

29
Are the fastest moving pieces of a jet engine supersonic?
5
Why do compressors constrict flow if this decreases pressure?
4
About how much drag does a non-operating engine create?
1
How does ignited gas spin the turbine?