How did the "wet takeoff" of old days work? Was the water used ordinary distilled water, or did it have additives? Where is it carried in the aircraft?

On many early jet airliners water was sprayed it into the engine air intake or compressor where evaporation cooled the air and allowed cooler, denser air to be ingested by the engine. The result was increased thrust, especially needed for operation from hot and high airfields, or a cooler temperature in the hot section of the engine at the same thrust. From SAE Paper Number 2004-01-3108:

Four water-injected Pratt & Whitney JT3C–6 engines were used on early Boeing 707–120 Stratoliner aircraft to augment takeoff thrust on days above 20 °F. This system used a belly tank to store demineralized water and an electrically driven boost pump to deliver water to the four engines. At that point, an engine-driven mechanical pump increased the pressure to about 400 psi for injection before the low-pressure compressor (LPC) on days as cold as or colder than 40 °F and for injection into the high-pressure compressor (HPC) only on days between 40 and 20 °F.

What would happen if kerosene instead of water was filled into the water tanks was tried out by a BAC-111 on September 6, 1971:

The aircraft collided with a bridge, shearing off both wings, after a double engine failure occurred during takeoff. The water-injection system to cool the engines during takeoff was inadvertently filled with kerosene instead of water.

I offer this as an adjunct to Peter Kämpf's answer above. The simple explanation is that the injected water evaporates during the compression stages, and this cools the air (think sweat evaporating cooling your skin on a hot day).

Water injection gives the jet engine the ability to do more work for a short time without exceeding the design limitations of the engine in extreme conditions.

Jet engines were / are designed and built to specifications and tolerances based on the materials used. The "design thrust" is usually the static thrust the engine is capable of given standard conditions (i.e. static air temperature, atmospheric pressure, humidity, etc.). But when it's hot outside, the design thrust is sometimes insufficient for the aircraft weight / runway length / wind conditions, etc., and airlines don't like having to bump pax / cargo off the plane for being unable to get airbornea. Water injection is a method to mitigate this scenario.

Understanding the ideal gas law, $PV = nRT$, is key to this discussion. As Peter stated, by cooling the air ($\downarrow T$), then something on the left side of the equation also has to decrease. ($R$ is a constant.) This has to be pressure ($P$), as the volume ($V$) inside the combustion chamber doesn't change (at least we'd hope it doesn't!).

But here's a twist: Adding water vapor to air lowers its density. Since density is mass (number of molecules $n$) divided by volume $V$, and again, the volume isn't changing, then this implies $\downarrow\!n$b. Now, we have $\downarrow\!PV = \downarrow\!nR\downarrow\!T$.

So, how do we increase the density to the air coming into the hot section as Peter mentioned?

To increase density, one needs to cram more molecules into the given volume. The only way to do that in an internal combustion turbine is to increase the fuel flow, thereby increasing the intensity of the combustion process, and causing more air to be sucked into the hot section. The water injection merely gives the engine the ability to do more work without exceeding the tolerances of the engine in extreme conditions.

Note that the water injected has completely evaporated into vapor prior to reaching the hot section. While the water molecules don't contribute to the combustion process (obviously), there isn't so much of it to hamper it, either.

I sometimes think water injection was merely an engineering "hack" to help bridge the technology gap between the large, modern airframes of that era, and the puny engines used to fly them.

Granted, metal airframe construction dates to the late 1920's, and jet engines didn't appear until around 15 years later. So, by the late 1950's, airframes were modern and state-of-the-art, but jet engine technology was severly lackingc.

The military dealt with this by bolting on more and more enginesd,e. However, this was impractical for commercial airline service, so any available engineering "trick" had to be employed to accommodate the newer airliners.

Lest I get flamed to a crisp for the above invective, let me just say that the "water injection era" needed to happen. Think about it: the Boeing 747 was the worst thing and the best thing to happen to jet engine development. The modern turbine engines these days are engineered for the "extreme" conditions mentioned above (no need for water injection), and cool gadgets like FADEC help keep them running clean and efficiently.

a But, airliner manufacturers do like to advertise the capabilities of their products (as do jet engine manufacturers). I mention this in particular because it seems that the 1960's and early 1970's saw a big increase in promoting air travel on a cultural and societal level yet it seemed as if the technology couldn't keep pace.

b Actually, the number of molecules isn't changing so much as the average molecular weight of all the molecules. Again, see this link for more info.

c I base this assertion on how the Boeing 747 program was delayed repeatedly because of problems with the JT9D development.

d and water injection. Note that I intentionally leave out afterburning as a "trick" in this context as it is often used in multiple stages of flight--i.e. it's not a one-time-use only procedure.

Water injection is used on the Rolls-Royce Pegasus engine on the Harrier jump jet, but it has nothing to do with combustion. Instead, water is injected to cool the turbine blades to temperatures that allow the engine to operate at full rated power.

The maximum take-off thrust available from the Pegasus engine is limited, particularly at the higher ambient temperatures, by the turbine blade temperature. As this temperature cannot reliably be measured, the operating limits are determined by jet pipe temperature. To enable the engine speed and hence thrust to be increased for take-off, water is sprayed into the combustion chamber and turbine to keep the blade temperature down to an acceptable level.

Water for the injection system is contained in a tank located between the bifurcated section of the rear (hot) exhaust duct. The tank contains up to 500 lb (227 kg, 50 imperial gallons) of distilled water. Water flow rate for the required turbine temperature reduction is approximately 35gpm (imperial gallons per minute) for a maximum duration of approximately 90 seconds. The quantity of water carried is sufficient for and appropriate to the particular operational role of the aircraft.

Selection of water injection engine ratings (Lift Wet/Short Lift Wet) results in an increase in the engine speed and jet pipe temperature limits beyond the respective dry (non-injected) ratings (Lift Dry/Short Lift Dry). Upon exhausting the available water supply in the tank, the limits are reset to the 'dry' levels. A warning light in the cockpit provides advance warning of water depletion to the pilot.

If you run out of water on a Harrier, you will have serious problems trying to keep the engine from frying itself in anything other than conventional flight. No VTOL after that.

This is really pretty much another supplement to Peter Kampf's answer, trying to clarify part of the answer that I found a bit unclear. Specifically, he quotes a section saying:

At least to me, those temperature ranges don't seem to make a whole lot of sense. 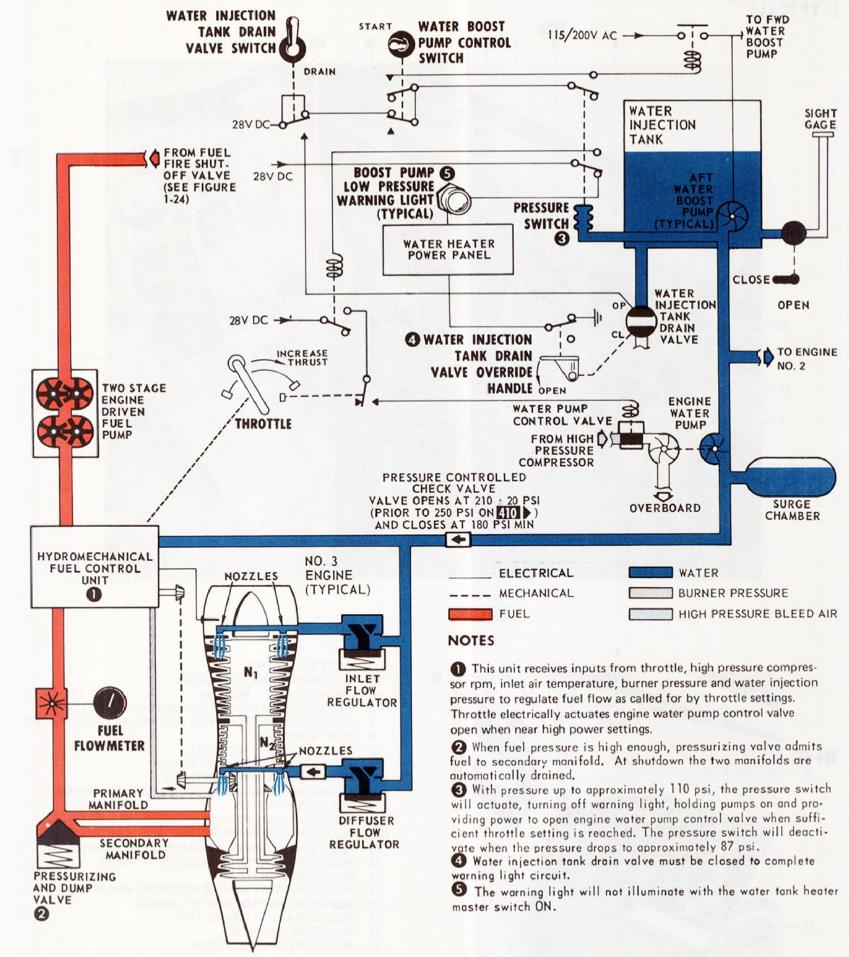 The injection of water ahead of the combustion chambers will cool the airflow, thereby increasing it's density and potentially allowing more fuel to be burned, increasing power. Water injection ahead of the high pressure turbine will have the effect of cooling the turbine, which may permit use of a higher power setting, and the mass of the water will be added to the mass flow rate through the engine, directly increasing thrust.

water molecules do contribute in the combustion process, since in the turbine the temperatures and pressures reach the thermolytic ratio for water ignition. At 1 bar that temperature is 5600C. At elevated pressures, the temperature is reduced subsequently, since volume remains the same, by n is increased relatively. At BAC-111 the crash incident was due to luck of thrust since no water spray was made available.

42
Why is water-contaminated fuel bad, but water-injection is not?
8
RATO used to get civilian aircraft out of airports with inadequate runway length?
8
Are any jet engines used in combat aircraft water cooled?
13
How does a turbofan with afterburner continue to function in extreme humidity and rain?
6
Would injecting water into a jet engine’s exhaust increase velocity?
5
How much water is carried for jet engine water injection?
0
Could sprinkling cool water on the runway in hot summer decrease air density?

12
How do you start a jet engine if the start valve is stuck closed?
1
WHY does a jet engine work?
0
How does supercruise thrust compare with static thrust ASL?
5
How much weight does a thrust reverser add?
5
How much water is carried for jet engine water injection?
12
How (and why) does engine thrust change with airspeed?
8
Are any jet engines used in combat aircraft water cooled?
2
Need help with calculation of engine airflow and jet velocity and efficiency