I'm sincerely surprised about the cockpit, in that it is essentially the same of the original A330, while I was expecting that renovation would affect not only the engines, installations, and lights but also the cockpit instrumentation taking inspiration from the new bigger screens of the A350.

I know that in this way the training for pilots is much easier, but at the same time I think that if a new cockpit is developed for a new plane (taking into consideration that "Type Rating" is anyway considered the same), it should be because of more safety, readability, and situational awareness.

In the past Boeing completely updated its cockpit inside the B747-400 and B737NG models from the original mechanical/analog gauges to the new glass cockpit. In those cases, surely the necessary training was very hard for pilots so, why not now for minor updates?

The short answer is that it's what the market wanted. There is always a lot of discussions between the airlines and manufacturer's before Airbus or Boeing commits to building a new aircraft. In this case both Boeing and Airbus came to the same decision -- the airlines were being driven by one single factor to replace their A320 or B737 fleets, they just wanted to reduce fuel expenses. That's why the Airbus is the 'neo' new engine option.

The airlines made it clear that any new aircraft purchases would be based on operational savings and that's primarily driven by fuel burn and the resulting costs. The solution to that is a new engine. Putting in a new flight deck is a huge expense for the manufacturers which would drive costs up and the airlines won't pay extra for something that doesn't save them money.

There's no cost benefit to a new flight deck, especially when (as others noted) you have a huge investment in an existing fleet. In fact, all it's likely to do is add costs. With a new flight deck you'll have a huge increase in maintenance and spares costs due to the need for stocking more parts with new part numbers (just adding a part number to a logistics system costs significant money.) You'll also need new crew training simulators due to the different displays and controls, whereas the neo option can be handled with software upgrades. And if it drives a need for new type ratings, that would mean more training costs and making sure you have the crews with the right rating at the right time.

In my experience in 20 years dealing with this market, airlines only spend money for two reasons:

Aside from that, you should consider Airbus' side. They're trying to sell airplanes and they have to compete with Boeing. Since the avionics architecture is quite different between the A320/A330 and the A350, moving to it would add huge costs and a couple years delay in entry into service. They also have to deal with the fact that airlines don't want to see a big price increase. Prices for the A320neo and B737MAX are not significantly higher than the current/older versions. If the competition can offer a 7 to 9% reduction in fuel burn for approximately current prices, spending an extra 2 or 3 years to match that with a new flight deck means a lot of lost sales in the interim. And you probably won't make enough margin to recoup the new flight deck costs.

If you keep the cockpit basically the same and just add what new switches are needed for the new engines, then most if not all operators can qualify their pilots in both models, and integrate the new arrivals into the fleet with minimal disruption. Need to substitute a NEO for a standard 320? No big deal, the same crew can fly either one. If the cockpits are wildly different, then the new jet is essentially a different type rating, and the pilots will have to be qualified (Edit: "qualified" in the airline sense -- current & qualified, not just type-rated) in one or the other, but not both at the same time. So when you substitute an aircraft, you have to change out the crew as well. That adds up to a lot of overhead, training costs, and scheduling inefficiencies.

In the case of the A-350, it IS a whole new aircraft, and nobody would be qualified in it at the same time as the A-330 or A-320, so there's no great need for backward compatibility. But in the case of the A-320 NEO, keeping commonality with the existing A-320 fleet so that pilots aren't restricted to one or the other is a big deal.

Now, I can just hear the objections... you said "B737-300 to B737-700 -- that's steam gauges to glass!" Yeah, sort of. BUT: Boeing "dumbed down" the 737 NG cockpit tremendously compared to what it could have been so that operators of the 737 classics could keep their pilots qualified on both the classic and the NG simultaneously. There was the "6-pack under glass" option for the NG displays, which made the NG display look like round dials, so that pilots used to the Classics had reasonably similar displays when they flew the NG. Less noticeable but still important, the overhead panel and the automation of the NG's was kept essentially the same as the classics, even though advances in automation would have enabled a FAR more modern approach to nearly every system in the aircraft and their management.

The option to digitally display round dials -- source page.

Another image -- showing how even the engine instruments were not much more than digital depictions of the round dials: 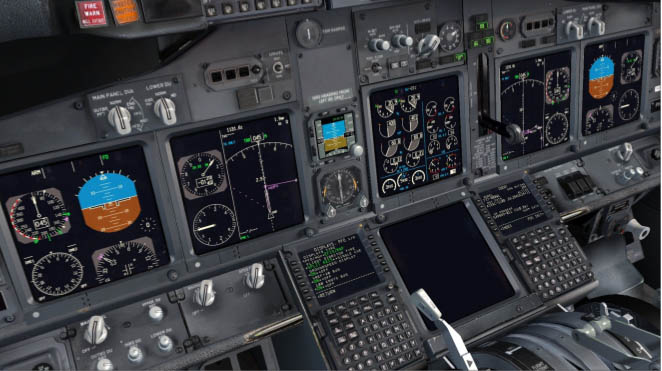 For better or for worse.

The short answer is money. The B747-400 and B737-NG are indeed very different airplanes from their predecessors. So much so that they were deemed different type ratings. Getting a new type rating for pilots at an airline is a much more rigorous task, and expensive. Consider the administration overhead, to add the necessary Ops. SPECS, Aircraft Operations Manuals, etc. and have these all approved by the FAA or equivalent, and add in mechanic retraining and certification and you've got a huge investment.

The NEO engines and the planes themselves are a little different operationally. I fly them at work sometimes. But their not so different as to require a new type rating. The differences training we went through was a basic slide show, memorizing some new numbers, a handout of differences and a pretty basic test. All standard for differences training. No special or sim training was required. Even the mechanics just have written material to read through for the new engines. Huge cost difference. Bottom line, the airlines get the huge fuel savings and no required costs for retraining folks.

Not the answer you're looking for? Browse other questions tagged avionics airbus-a320 airbus-a350 airbus-a330 or ask your own question.