Is there a solution to radio interference?

I was reading about the Tenerife Disaster and came across what seemed to be the probable cause behind the accident.

A simultaneous radio call from the Pan Am crew caused mutual interference on the radio frequency, which was audible in the KLM cockpit as a three-second-long whistling sound (or heterodyne). This caused the KLM crew to miss the crucial latter portion of the tower's response. The Pan Am crew's transmission was "We're still taxiing down the runway, the Clipper 1736!". This message was also blocked by the interference and inaudible to the KLM crew. Either message, if heard in the KLM cockpit, would have alerted the crew to the situation and given them time to abort the takeoff attempt.

I understand that the science behind radio waves is the cause for this interference, but is there a solution (non-radio if need be) for when ATC and other aircraft talk over each other?

edit1: By solution I mean a way of only allowing 1 party to speak on a specific frequency at a time , be it technical or not. I would just want the possibility of pilots/ATCs talking over each other to be close to 0.

edit2: I know the Tenerife disaster was caused primarily by the pilot's inability to wait for clearance, and then report it back, but this question is about radio interference and if a solution exists, not if fixing radio interference is a worthwhile task to begin with.

Firstly, it is worth noting that the blocked radio transmission is only one point on a very long list of factors that caused the horrible accident on Tenerife. There is enough redundancy in aviation systems and procedures that a single fault somewhere in the system will [almost] never be enough to cause an accident. Weather, stress, a terrorist attack, company policy, poor CRM and many other things were also contributing factors.

Communication between air traffic control (ATC) and pilots is mostly based on simplex radio. Simplex radio only allows one station per channel to transmit at the same time; if two stations transmit at the same time, the signal will be blocked. Sometimes, if one signal is stronger, it will be possible to hear that signal but not the other. The main problem is that the two stations transmitting will have no way of knowing that they are blocking eachother. This limitation regularily results in various incidents - for example, when there are two aircraft with similar sounding radio callsigns on an ATC channel, one crew might mistake an instruction for the other flight, thinking it is actually meant for them. If both flights read back the instruction at the same time, neither of them will hear the readback from the other aircraft and realise the mistake, and ATC might hear just one of the readbacks, and not realise that both flights are following the instruction meant for just one of them.

So why isn't there work being done to phase out simplex radio in aviation?

There is. It's called CPDLC, or Controller-Pilot Datalink Communications. (Other, similar systems exist as well, with different names. In the following I will just discuss CPDLC). 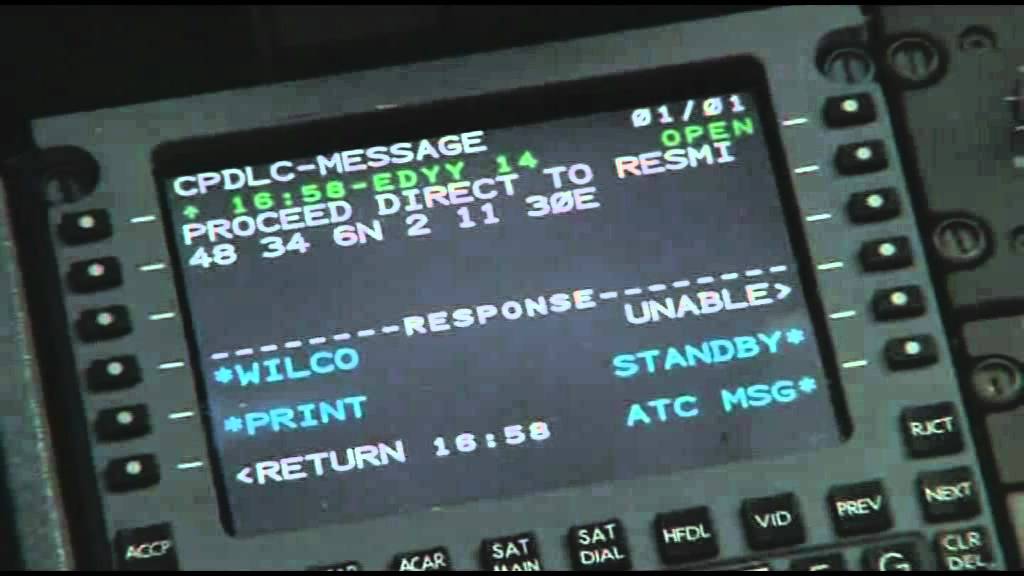 CPDLC is a digital system that allows ATC and pilots to communicate via text. It is already widely deployed in many areas, one example being Maastricht UAC, one of the busiest area control centres in Europe. Multiple stations can transmit at the same time, without the risk of blocking other transmissions.

So why do we still have simplex radio?

So far, CPDLC is only used for area control. In areas where ATC instructions are time critical, such as an approach or aerodrome environment, we still rely on simplex radio, because it is guarenteed to be instantaneous - and pilots are used to acting immediately to a voice instruction. However, it should only be a matter of change of procedures and appropriate training before CPDLC can be used in all phases of flight.

More importantly, aircraft equipment is expensive. Replacing a simplex radio with CPDLC equipment involves a significant cost per aircraft. While this may be feasible for large airlines, remember that they only make up a part of flights. There are thousands and thousands of private planes, balloons, gliders and whatnot, and private pilots or flying clubs may simply not have the funds to implement CPDLC. And obviously, ATC can't turn off their simplex radio until everyone has equipment to replace it.

Another disadvantage of CPDLC, or other communication equipment that allows direct communication between cockpit and controller working position, is that it reduces situational awareness. A big advantage with simplex radio is that everyone has to listen to what everyone else is saying, since you can't talk when someone else is talking. This gives pilots the possibility to establish a mental picture of the traffic around them, which ultimately increases safety. As we saw with Tenerife, the lack of such a mental picture can result in tragic outcomes. However, simplex radio has probably prevented many other accidents, because everyone on the frequency knew what was going on around them. The Providence incident of December 1999 comes to mind as one example among many.

So, is there a solution to radio interference? Yes, there is. Is it easy to implement? No, it is both technically and financially difficult. Will it necessarily prevent accidents such as the one on Tenerife? No; a thorough safety and risk analysis must be carried out before deploying it everywhere.

Yes, this is possible with technology, but there is a big problem too. How do you decide which radio has priority?

Right now the system is "whoever has the strongest signal, wins", but both will probably hear a squeal. ATC may hear both, but the strongest one will probably be audible over the noise. This can be advantageous for example if an aircraft in the pattern needs to declare an emergency while ATC is talking to somebody on long final.

The current system, while antiquated, does work for the most part. There are very few examples of accidents caused by missed communication due to being stepped on by another aircraft. Usually there is more to it, for example in the Tenerife accident the pilot was anxious to get going and ignored the flight engineer's warning about the Pan Am aircraft not being clear. As Freeman pointed out this is where CRM broke down, not the radio's. The other contributing factor in this accident was ATC's inability to monitor the traffic on the ground because of fog and no ground radar.

In the United States there is an active push to reduce commercial radio traffic by using in-cockpit displays to relay ATC instructions. This system relies both on the new ADS-B mandate being in place as well as regulations for equipment being installed in aircraft that can display and alert pilots.

This isn't really an answer, but it got to be far too long to put in the comments...

After the KLM plane had started its takeoff roll, the tower instructed the Pan Am crew to "report when runway clear." The Pan Am crew replied: "OK, we'll report when we're clear." On hearing this, the KLM flight engineer expressed his concern about the Pan Am not being clear of the runway by asking the pilots in his own cockpit, "Is he not clear, that Pan American?" Veldhuyzen van Zanten emphatically replied "Oh, yes" and continued with the takeoff".
-Wikipedia, emphasis mine

Not that a technology solution wouldn't be good, but this is the accident that really drove the development and adoption of CRM and standardization of radio phraseology, which, had it been in place at the time, may have had a very strong chance of preventing the incident in the first place.

There were so many factors leading to this particular accident that the interference was only one issue. While it was very important, it wasn't the final bit of communication, wasn't the last thing that was said, and wasn't the last opportunity for the KLM flight to abort takeoff.

It's worth noting that any solution to the question you raised would not have prevented this, or similar disasters, from happening.

Regardless of any missed or corrupted transmissions with two people speaking at the same time, the crew commenced the take-off without having received, and read-back, a clearance to do so. Short of replacing humans entirely with computers, there is no solution to a pilot ignoring the established and regulated procedures, put in place to avoid exactly this problem.

The procedures also include the phrase "say again" if you did not hear clearly and simply asking if you have clearance if you have not positively received and understood it.

This disaster was caused by crew error driven by "gethomeitis" and not any problem inherent with radio communications.

There are new ATC radios that have "Detection of Simultaneous Transmissions" or DsiT that alert the controller that more than one aircraft is transmitting. R&S's Series4200 is one of them. The controller will get a visual alert on the voice communication system display.

Not the answer you're looking for? Browse other questions tagged air-traffic-control radio-communications radio lost-communications or ask your own question.

6
Why is radio communication still used?