How is the camber calculated? 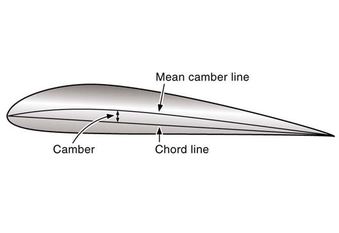 In this picture, how do you determine the amount of the camber? Is it the average difference in the distances between the mean camber line and the chord line from the leading edge all the way down to the trailing edge?

The mean camber line is the locus of points halfway between the top surface and the bottom surface (which are sometimes referred as upper and lower cambers). For a symmetrical airfoil, it is merged with the chord line.

This curve is described by a polynomial function at each point along the chord axis. An airfoil may have a camber line which changes direction at one or more point, and which possibly crosses the chord.

All measures are taken perpendicular to the chord which is considered having a length of 1 or 100%.

What you ask for is the maximum camber, which is determined by the value of the maximum difference between chord and mean camber line, and the distance from the leading edge.

5
Why and how do flaps increase the curvature of the wing?