How much power do planes use when taking off at London City?

I watched a video of an A318 taking off at London City and it took just 20 seconds from setting takeoff thrust to getting airborne.

What I'm asking is a thought experiment, let's say, we fly from one airport to another, and everything is the same except runway length. In one case it's 1500 m, in another it's 3500 m.

How much thrust does an A318 (or any other aircraft certified to fly at LCY) apply at a regular airport vs on a short runway like LCY? How much thrust is used (in kN) and what is the thrust/weight ratio?

Let's say there is an infinite runway, and a twin-jet capable of flying the whole route on one engine.

The jet starts its takeoff roll at maximum thrust, and at 40 knots an engine quits. Does the crew continue or not?

If they continue, they'll veer off the runway. Because the asymmetric thrust is huge and the airspeed is low, they won't be able to keep the plane on the centerline with the rudder.

Vmcg is defined as the minimum speed, whilst on the ground, that directional control can be maintained, using only aerodynamic controls, with one engine inoperative (critical engine on two engine airplanes) and takeoff power applied on the other engine(s).

Why is it important?

The lower the thrust on short runways, the more you can carry...

It may be counter-intuitive, but here's why: there are three types of thrust reduction on takeoff:

(Availability of the modes depends on the options available for the type and the options chosen by the airline for their fleet.)

Derate vs. flex and effect of derate on takeoff weight 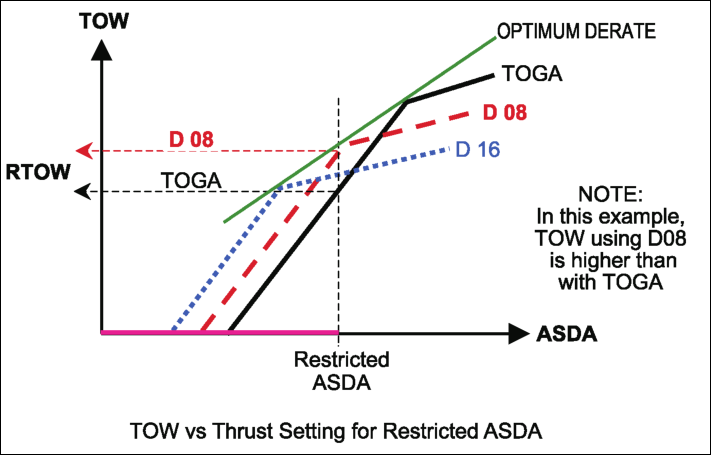 The minimum control speeds associated with the FLEX take-off are related to VMCG/VMCA at TOGA thrust. Therefore, should the aircraft suffer an engine failure at V1, there is no limitation on selecting TOGA thrust on the remaining engine(s).

A reduction in take-off thrust leads to lower VMCG/VMCA and hence, a lower V1. When taking off from short or contaminated runways where ASDA [Accelerate-Stop Distance Available] is the limiting factor, a reduction in the minimum control speeds may generate a take-off performance benefit and a higher MTOW.

Taking off from LCY

A BA A318 taking off from LCY headed to New York with lots of fuel might as well be using reduced (derate) thrust because of this shorter runway.

In short, it's very hard to compare even if the only variable is the runway length.

Takeoff thrust is calculated by a computer (or by looking up tables), since a lot of factors are considered:

Since we do not know the takeoff weight of the specific flights, I will make an assumption here and set it to 80,000 KG, which is the highest figure I have in the reference table.

At a temperature of 20 degrees Celsius, takeoff weight of 80 tons, effective runway length of 3000 meters, the speeds from the table are: V1 at 145, Vr at 153 and V2 at 155. This is the takeoff with max thrust, which according to Wikipedia, each engine is delivering 120 kN of thrust. The thrust to weight ratio would be 0.15. Converting the variables to SI units, I calculated that the time to reach V1 to be exactly 10 seconds.

This calculation is, obviously, far from reality, as it assumed:

Moving on to shorter runways, the shortest runway length in the table I have is 2250 meters. It states that at this length, the maximum takeoff weight is 74.2 tons, and the limitations which resulted in this figure is runway length and Vmu(Minimum Unstick speed), the lowest speed at and above which the aircraft can safely lift off the ground with sufficient control surface authority and without a tail strike.

From the few data points I have, it seems that on a 1500 meters runway, the maximum takeoff weight would be around 63~65 tons. 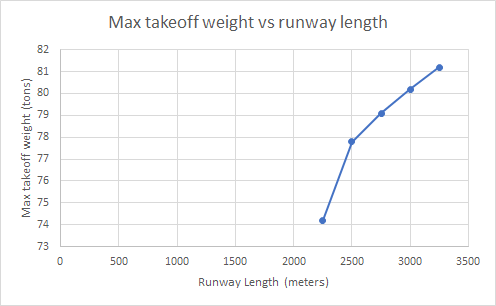 So to answer your question:

Not the answer you're looking for? Browse other questions tagged aircraft-performance takeoff runways or ask your own question.

21
How many kilowatts to get an electric 747-8 airborne?
3
Can a Bombardier CRJ derate the takeoff thrust?
2
Is reducing V1 a viable option for pilots when the ASDA is shorter than the ASDR?

6
How much pollution is created by an airplane taking off?
4
How much lift do planes produce before rotation?
7
What performance issues/symptoms can a pilot expect while taking off above MTOW?
20
Why is the takeoff decision point based only on speed and not time or distance?
15
Is it normal practice to use 25 degrees of flaps when taking off at max weight in a PA-28-181?
2
How many planes do ATC controllers assist in taking off/landing each day?
3
How much clearance is provided when taking off over a 50 foot obstacle?
1
Where and when would a 737-700 be taking off at an altitude of 19 kft?