Why did flight attendants need to be seated early landing at Palm Springs?

I took an Alaska Airlines flight to Palm Springs (PSP) and on landing the flight attendant mentioned that "this is one of the airports where we need to be seated early". Why is that the case for that airport, and what would be some of the other airports where that also happens?

I can't say for sure, but here's one plausible reason: Palm Springs is in a valley and surrounded by much higher terrain on three sides, which requires more maneuvering to land than at other airports. You can see on the VFR sectional that the airport elevation is 476ft MSL, but there are mountains over 8000ft within 10 miles of the airport. If you check the instrument approach plates for runway 13R/31L (it's the longer one, so most likely to be used by an airline), you can see that the flight paths are far from straight: 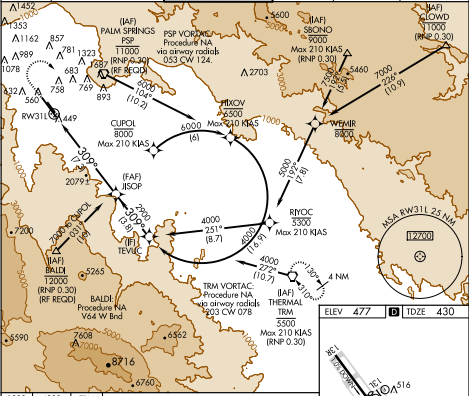 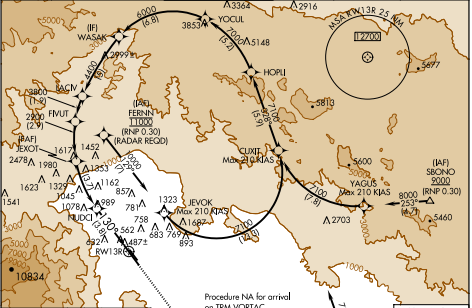 I can imagine the pilot would brief the cabin crew to be seated well before landing for safety while the aircraft flies the approach. Mountains often produce turbulence and high winds too, which would be another good reason to be seated while maneuvering at a lower altitude over that terrain.

Not the answer you're looking for? Browse other questions tagged faa-regulations safety landing or ask your own question.

21
Are children safe when seated in lap during a flight?
11
How often does evacuation happen as shown during the pre-flight safety videos/stewardess instructions?
9
Why would aircraft take-off in the opposite direction as landing despite wind direction?
15
Why would a pilot pick this military airport as an emergency landing airport?
12
Why do flight attendants wear gloves during takeoff and landing?
5
Are there rules about using the "Fasten seatbelt" sign outside of take-off/landing/turbulence?
7
Do flight attendants do pinch-hitter training?
8
Could an airliner abort a landing after using the brakes system while landing?
6
Do I need a ferry permit for an alternator repair ferry flight within a mode C veil?