Why does overspeed cause structural damage or failure when limit load factors are not exceeded? 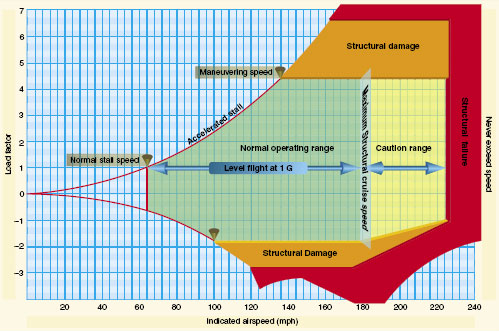 Flying way too fast is an example as shown by the graph. For example descending with full power while maintaining 1 G load factor. Or with a powerful enough engine, exceeding the speed limit in level flight.

The air impacts dynamic pressure on the aircraft, the faster the plane, the higher this pressure—up to the design limitations.

What causes structural failure when the aircraft is merely flown fast?

High speed induces vibrations, flutters, etc., all would likely cause loss of control and/or structural damage/failure.

Flutter: At its mildest this can appear as a "buzz" in the aircraft structure, but at its most violent it can develop uncontrollably with great speed and cause serious damage to or lead to the destruction of the aircraft.

5
What happens if full thrust is applied at cruise altitude for 5-10 minutes on a 787?

9
Which aircraft endure the highest Max Q's (aerodynamic pressure)?
12
Why does stall speed decrease when flaps are deployed?
6
Why does the A320’s maximum allowable aileron deflection decrease, rather than increase, when the flaps are extended?
20
Why do non-aerobatic aircraft have a negative G limit?
4
Why does lift curve slope increase when Fowler Flaps are deployed?
1
Why does disk loading mean anything when rotors/propellers are not disks?
0
How does the aircraft keeps propelling forward when airflow and thrust are not aligned?