What would happen if the wing of a supersonic plane goes into the shock wave from the nose?

What happens if the wing of a supersonic plane goes into the shock wave from the nose?

A plane have this shock wave at the nose going back at an angle, but it also have shock waves going back (in the same angle) from the intake or the joint between the wing and the body, shocks that do go over the wing.

Since the wing can live with that, why is it then a problem if they go into the shock wave from the nose (which I have always learned)?

In case anyone want to know, then the question arose when an friend and me discussed chock-cone angles, and the the X-29 seem to have an angle between nose and wing-tip that relates to the angle a schock will have at M1.8, the plane´s top speed.

-And the same seems to be the case with many other fast planes.

I haven't been able to find a better image than this, I believe it is an F-18 with pretty straight wings: 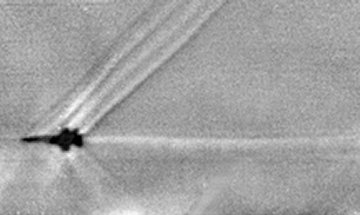 The outer wing would fly in undisturbed flow and an inboard wedge would fly inside of the Mach cone of the nose. This is similar to a wing with a supersonic leading edge; something that has been quite common with Mach 2+ designs before swing-wing aircraft. The nose shock of a pointed nose is a weak, oblique shock which does not alter flow parameters dramatically,

14
Why is the coefficient of drag for straight wings at supersonic speeds lower than for swept wings?
12
Can a supersonic plane use a subsonic wing if the nosecone shock produces subsonic airflow around the wing?