How are wind tunnels used with scale models?

This answer introduced me to the problem of using scaled models in a wind tunnel.

How are wind-tunnels used in practice (for modelling the performance of subsonic airplanes)? In particular:

During development, a lot of different wind tunnels are used. Scales range from full scale to less than 1/100, and sometimes not only the geometric, but also the dynamic and elastic properties of the aircraft to be tested must be modelled correctly.

Today, preliminary work is mostly done in numerical simulations, but before the availability of computers, early wind tunnel models would be between 1/50 to 1/16 scale (depending on the size of the real article and the available wind tunnel), often using modular models on which different engine placements or tail geometries could be tried out. Since wind tunnel testing costs real money, early tests are restricted to small, low-cost tunnels which run at ambient temperature and density. Differences in the Reynolds number between test article and the real aircraft are covered with correction factors and experience.

Only when a design is moving ahead during development, bigger and more expensive tunnels are used. Again, matching the Reynolds number is not possible and not even necessary for some tests: For a spin tunnel the test article must be scaled dynamically (so it has correct moments of inertia), but separated flow is less affected by the Reynolds number, so the precision of a 1/20 scale model is sufficient. Also, a free-falling model in a spin tunnel needs quite a bit of space to move around, so even small models already need test sections with a diameter of several meters.

To reduce cost and avoid the tight schedules of wind tunnels, free-flying or radio controlled models are also used. Watch how Dornier engineers tested the dynamic behavior of the then-new tricycle gear of the Do-335 in this video (starting at 2:00') or ditching characteristics (starting at 2:13').

Only when both Mach and Reynolds number need to be matched, cryogenic and pressurised wind tunnels are used. Due to their energy demand and availability, such tests need to be scheduled years in advance and meticulously planned. Models can run into millions of dollars or Euros, so such tests will mostly narrow down parameters which had been measured previously in simpler tests. Large tunnels like the 9.5x9.5m LLF in Marknesse (the Netherlands) are mostly used for low-speed and high-lift characteristics testing since its 12.6 MW engine can only support a speed of 62 m/s at full power. On the other end of the scale are hypersonic blow-down tubes which support a testing section of 0.5m diameter in which Mach 6 can be achieved for a fraction of a second.

Full-scale testing in a wind tunnel is only possible with small aircraft - see the answers to this question for examples. Even then, the speeds do not match the top speed of the aircraft, so the loads are a fraction of the real loads.

It certainly is an unusual luxury for an engineer to have full Reynolds Number tunnel data available.

The only way to get both Reynolds and Mach number similarity for models (unless you change the medium) is to use pressurized and/or cryogenic wind tunnel. The cryogenic wind tunnel achieves the required Reynolds number by reducing the viscous forces rather than increasing the inertial forces; even then the actual Reynolds numbers encountered in flight are rarely achieved and one has to resort to scaling laws.

The scale of the model used depends on the application. In some cases (like hypersonic vehicle testing) 1:1 scale models are used, while in other cases like A380 testing, even 200:1 models were used.

Though the force acting on the models would differ by applications (and even approach the actual forces in some cases), the forces acting on the smaller scale models are quite small (note lift and drag scale as square of the dimension provided other parameters are same, which is not even the case here). In general, various scaling laws are used to arrive at the forces experienced by the actual aircraft. For example this video shows the forces in an A380 scale model in the order of Newtons. Usually, you would like to find the lift (or drag) coefficient of the model and use it in actual case.

The Kirsten Wind Tunnel in the image you've linked can measure a maximum lift of slightly more than a ton with the other forces an order of magnitude less than that. Note that this is a quite large subsonic tunnel and smaller tunnels can measure even less. You have to scale the results according to the model. The air speed is given as ~ 90 $ms^{-1}$.

There are a number of things measured and observed in the wind tunnel, which may only be loosely related to force measurements like flow visualization, effect of store jettisoning, wake analysis, among others.

Thanks for the other answers. The last part of my question, i.e. what's the point of testing using small models which don't match the Reynolds number, seems to be answered by the graph in this answer: 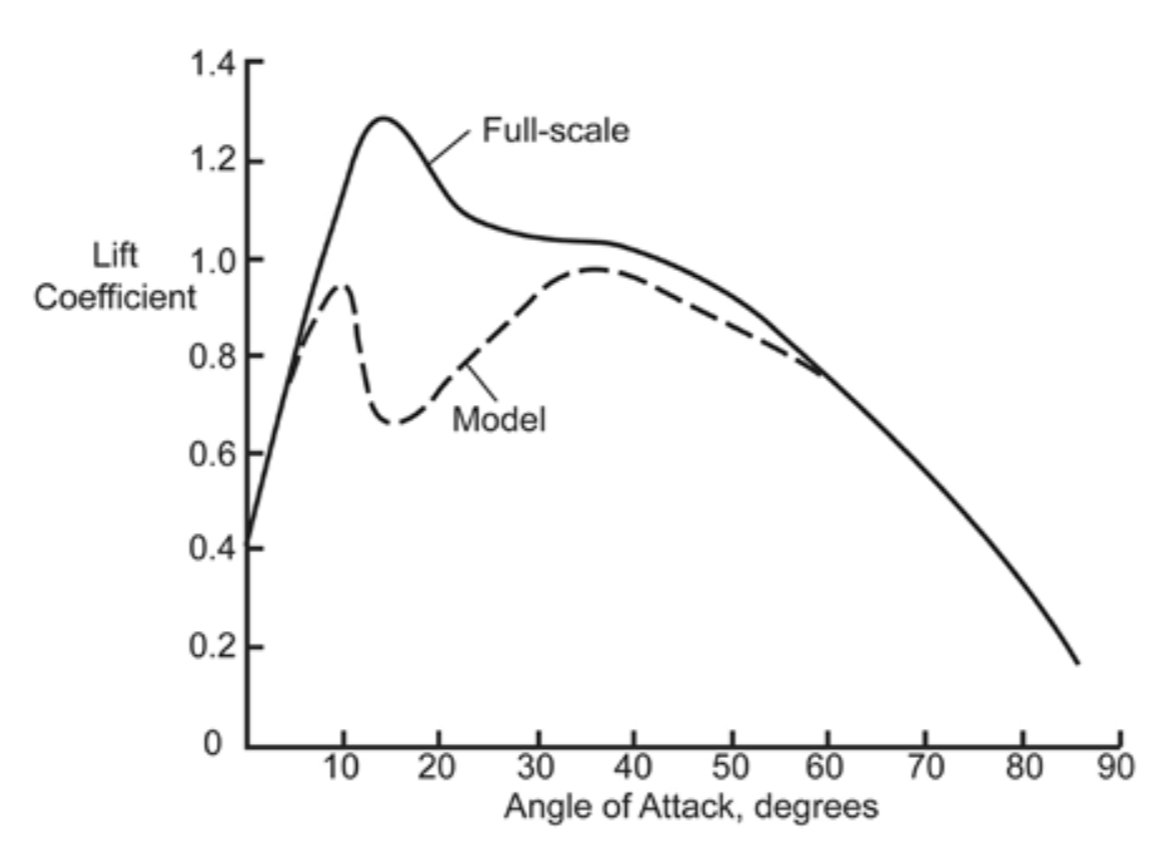 This graph shows that the lift coefficient of the model and the full-scale aircraft are identical at ordinary angles of attack; they diverge at steeper angles (maximum lift), as stall becomes imminent (the model stalls more easily); and become identical again post-stall. Even when they're at their furthest apart they're not very different (e.g. the difference is a factor of 2 rather than a factor of 50).

The paper this graph was taken from has a wealth of other information.

Also this video from the European Transonic Windtunnel explains how they achieve realistic Reynolds numbers: by lowering the temperature (e.g. to 110 K, i.e. -160 °C) by evaporating liquid nitrogen after the compressor, without oxygen (which would liquefy), and by increasing the pressure (up to 4.5 bar).

The largest models it can fit have a wingspan of about 1.6 metres.

Not the answer you're looking for? Browse other questions tagged aerodynamics wind-tunnel or ask your own question.

39
Why do model aircraft fly and maneuver so differently from real aircraft?
15
Can you fly a plane in a wind tunnel?
16
Why can't model aircraft be used to discover spin and stall behavior of manned aircraft designs?
11
How is windspeed scaled in wind-tunnel tests?
4
Does the Reynolds number on a smaller model need to match the one of the original aircraft?
3
How is Reynolds Number derived and used?
1
Why don't we simulate similarity parameters simultaneously in the same wind tunnel?
1
Do aircraft designers gather real data to confirm their design (CFD, wind tunnel) data?

7
Why don't all wind tunnels use magnets to suspend models?
16
Why are wind tunnel models sometimes placed upside down?
2
Are these pressure and velocity distributions calculated by CFD simulation correct?
4
Does the Reynolds number on a smaller model need to match the one of the original aircraft?
9
Why do wall-to-wall airfoils in wind tunnels produce no (or infinitesimal) downwash?
11
How is windspeed scaled in wind-tunnel tests?
2
Lift and Drag Coefficients using load cell data
3
How to artificially increase the Reynolds number in a wind tunnel?
1
Tapered Wing Providing low Coefficient of Lift
17
What are some specific benefits of cryogenic wind tunnels?