How does hovering in ground effect (IGE) reduce drag?

I understand that when IGE the induced velocity and thus the induced angle is reduced, rotating the total aerodynamic force (TAF) closer to the vertical and hence increasing the vertical component of lift (for the same power).

What I don't understand is why drag is reduced (some texts refer to a reduction in induced drag, others to rotor drag). Diagrammatically, the horizontal component of drag (parallel to the tip path plane and that which opposes rotor RPM) actually appears to increase.

I've concocted this diagram which may itself be incorrect and the source of confusion, or maybe its just semantics? 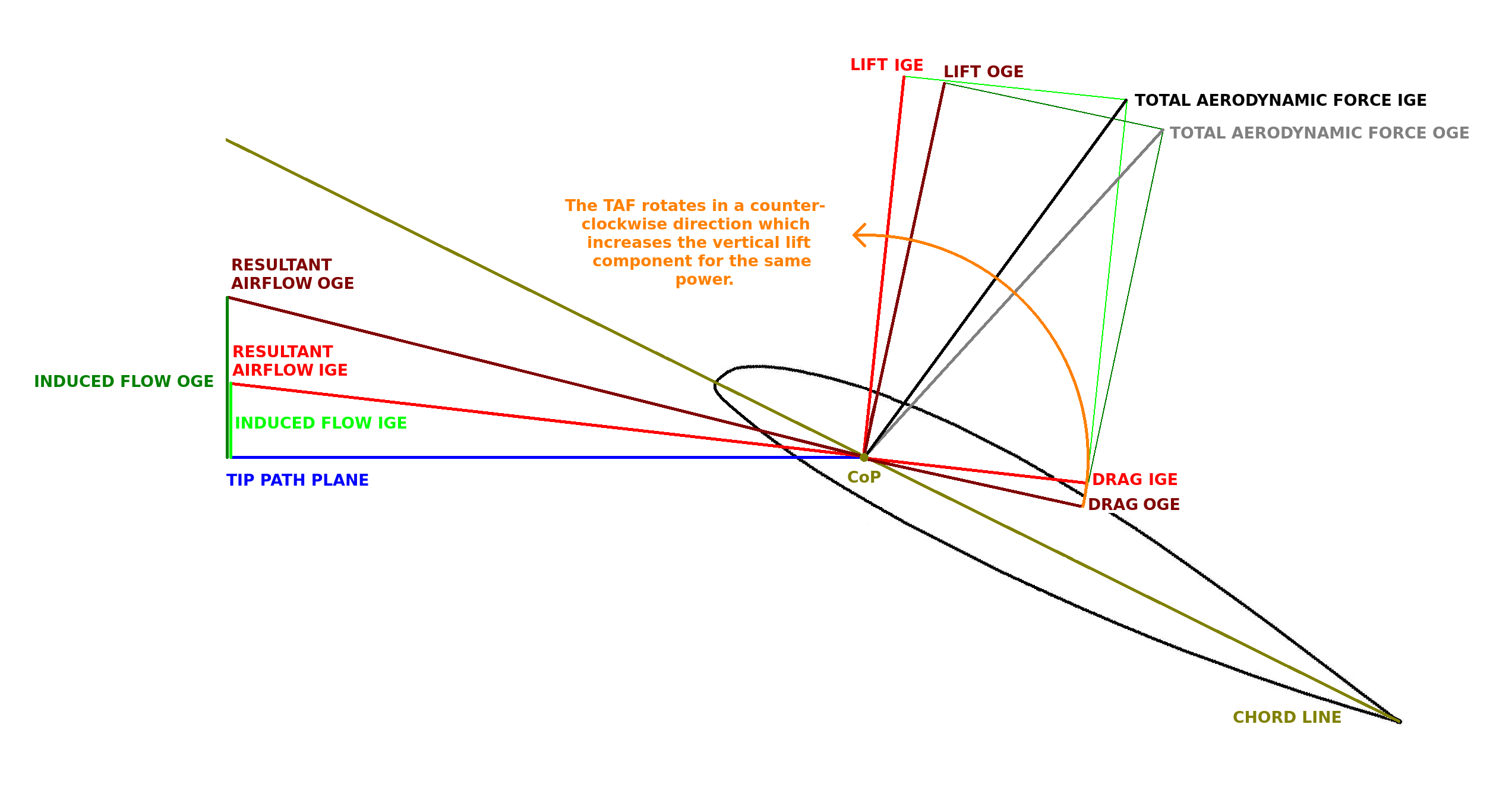 The inflow becomes less vertical and also reduces in velocity since the pressure under the disk increases. The rotor airspeed is therefore reduced and induced drag reduces in proportion to the square of the reduced airspeed.

The tip vortices (recirculation) are also reduced meaning that the outer portion of the blade, where most of the lift is generated, becomes more efficient.

Since the angle of attack has reduced, because the inflow is more horizontal and the lift vector is now more vertical, you get more lift for the same pitch angle and therefore require less power.

This image, from Copters.com, may help.

To add some clarifications.

Why does the rotor effective airspeed reduce?

Imagine a helicopter in a zero wind, ideal conditions out of ground effect hover. The rotor, to produce lift, accelerates air downwards. Since there is no wind and the helicopter is not moving, the air is drawn into the disc from around it and mainly from above it. Ignoring side effects, the air is drawn down equally all around the disc. The airflow drawn into the disc has a horizontal component and a vertical component. The vertical component is large as there is little to stop the disc from pulling air down and accelerating it downwards. The speed of the rotor plus the horizontal component of the inflow co-incident with the average chord of the blade can be thought of as the "relative airflow".

Now imagine the same except hovering in ground effect. The cushion (increased pressure) below the disc reduces the inflow (imagine a fan partially blocked, the fan draws in less air) and thus the horizontal component of the inflow is reduced. Therefore, the relative wind airspeed is reduced. As you can see from the diagram solving the triangle of vectors, the angle of attack is also reduced. The collective could actually be reduced to accelerate the same amount of air. This power reduction results in a decrease in the induced drag.

Why does the same pitch angle produce more lift when hovering in ground effect?

The biggest "drain" of power when hovering, and the main reason why hovering uses more power than any other flight phase, is the vortices around the rotor tips and the outer third of the rotor where most of the lift is produced.

When hovering out of ground effect, there is nothing to stop the accelerating column of air under the disc from "escaping" and being drawn back up into the in-flowing air leading to re circulation and significant vortices. When hovering in ground effect, the air is forced to move out laterally from under the helicopter which effectively increases the radius of the vortices. There is a significant reduction in the turbulence around the tips and the outer third with a corresponding large increase in efficiency. Therefore, more lift is generated in ground effect than out of ground effect for the same angle of attack.

It is possible, when there is little power in reserve, to be unable to take off vertically from long grass but be able to do so from the adjacent hard standing.

I think this video helps to visualise the vortices.

Inadvertently, the question posed has less to do with ground effect and more to do with the total aerodynamic force (TAF) and vector diagrams.

The total aerodynamic force (TAF) can be resolved into different components dependent on the chosen frame of reference. The frames of reference most useful in studying aerodynamics are the;

The original diagram in the question resolves the TAF relative to the RAF and fails to differentiate between blade drag and rotor drag. The benefits associated with hovering IGE come from the reduction in rotor drag (less power required).

To understand this by studying the vectors, the TAF should be resolved with reference to the plane of rotation (not the RAF). In this way, it is quite clear the rotor drag reduces when hovering IGE due to the more vertical total reaction which results from the reduction of the induced flow. 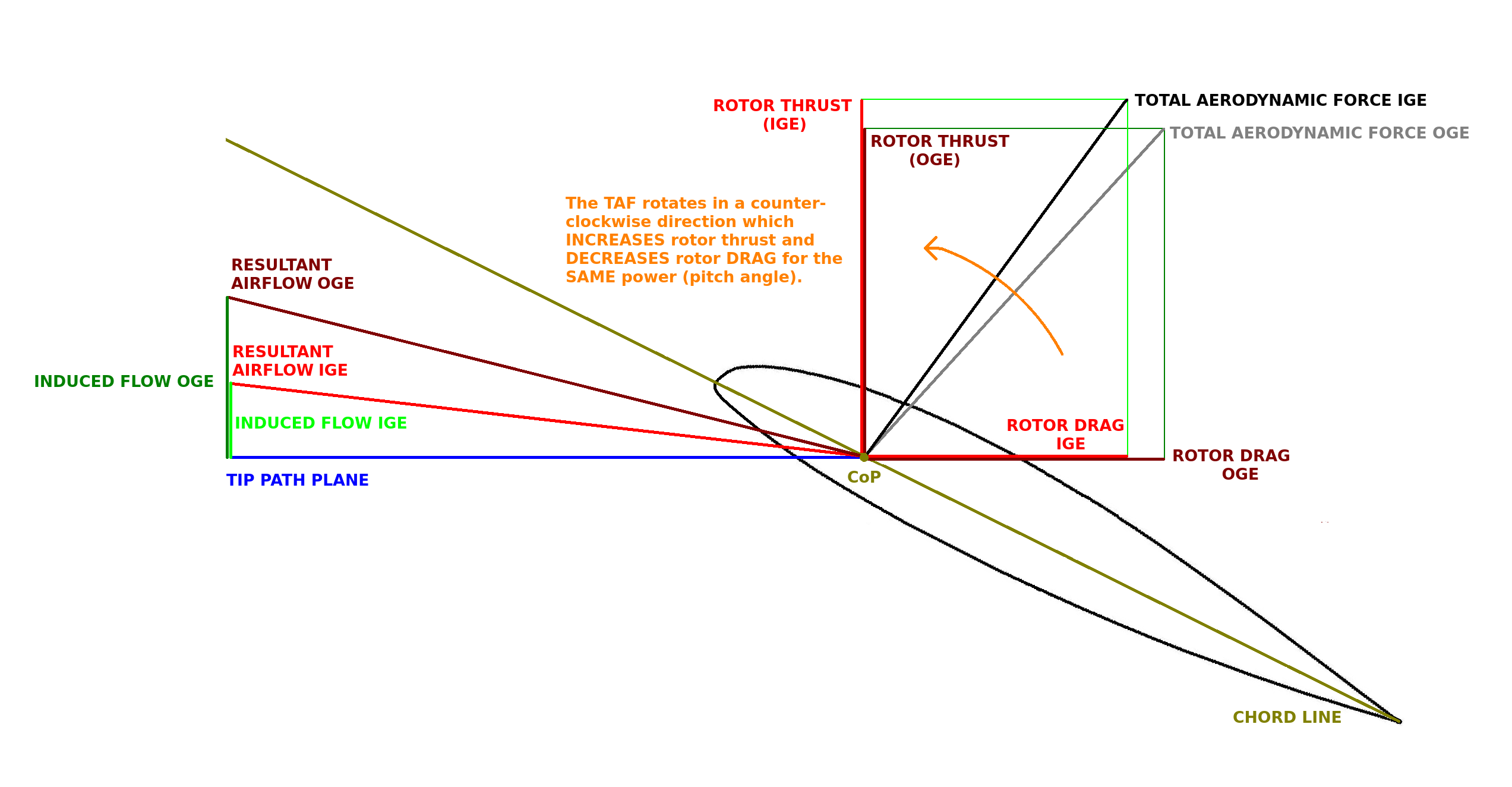 An IGE hover, the downwash hits the ground, creating a cushion of air. This cushion of air reduces the amount of power required to remain in the hover, reducing cyclic, and therefore reducing drag.

Induced drag is caused by bending the air downwards to create lift: the higher the deflection angle, the more induced drag. From the wiki for induced drag: 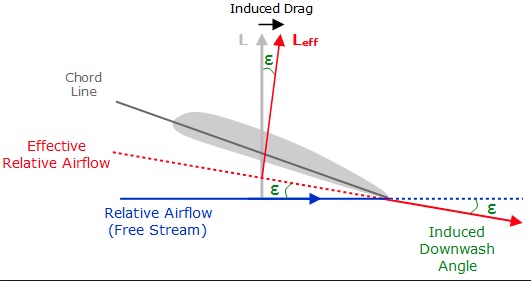 When in ground effect, the air cannot deflect very much, but bounces back off the ground. It cannot penetrate the ground, which acts like a mirror, creating a higher pressure underneath. Part of the lift is now created by higher static pressure under the rotor blades.

So Out of Ground Effect OGE, all lift is created by deflection of the air mass, and deflecting at a lower angle results in less lift. IGE, the ground mirror effect pairs lower angle deflection (less induced drag) with a higher static pressure underneath the rotor (same amount of lift).