When is deicing required?

For airliners, under which meteorological conditions is de-icing required?

Is decision to de-ice down to regulations, the airline, or the captain?

There are a few stages where ice prevention or mitigation is relevant. The FAA publishes a nice handbook on it here if you want more info. Very broadly speaking De-Icing activated when airframe ice is noticed. Anti-Ice is activated when a Pilot believes they may enter icing conditions. Ground based De-Ice is applied when icing conditions prevail in the area.

Most, if not all commercial airports offer de-ice facilities if geographically relevant. After the crash of Air Florida 90 the FAA took a bit of a harder stance on De-Ice and now stresses the need for mobile De-Ice units to allow planes to be De-Iced without leaving the taxi queue as well as permanent stations as they have always had. A lot of their suggestions are covered in this AC as well as this one. In this case both airline procedure and FAA regulations will dictate the need for De-Ice. Strictly speaking according to FAR 121.629 a dispatcher can hold an aircraft if they feel it is not correctly De-Iced. However by the same law a pilot can hold their own departure for the same reason.

Once in the air there are a few ways things happen, but generally its ultimately up to the pilot to activate the De-Ice system. On one hand the aircraft POH will more than likely have guidance on when to do this, however, airlines may implement further (and more strict) procedures. Some aircraft are equipped with systems that automatically activate in the presence of ice build up.

Once in route there are effectually two kinds of systems,

Ice can form in a variety of conditions and can be dangerous or potentially fatal in some aircraft. The temperature depends on the cloud type but generally speaking low temperature and higher moisture content will create worse issues. 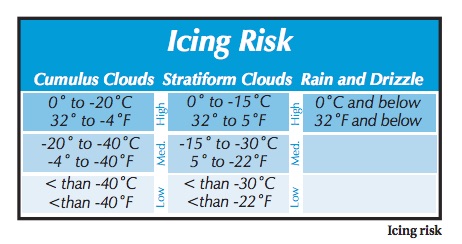 Pilots will be alerted to possible icing conditions via an AIRMET ZULU. These are often quite broad area AIRMET's. If a pilot believes they are potentially flying into icing conditions they should keep an eye on the airframe for structural icing build up. Many airplanes have icing lights to help at night with this. A pilot can activate the De-Ice system at any point if they feel it is needed.

For all aircraft, structural icing can occur when moisture is present in the air at temperatures between about 4° and -10°C.

Your comments would indicate you are talking about the application of deciding fluid to the aircraft prior to departure. The inidividual airlines may have their own protocol for the use of deciding fluid, but the decision to do so is the prerogative of the flight crew with the captain's approval. Most likely that kind of decision is made if known icing conditions are anticipated in the flight plan immediately after takeoff. A proper weather briefing for AIRMET sierras, temp/dew point spreads, IMC conditions with precipitation and low temperatures present all would factor in to this decision.

Not the answer you're looking for? Browse other questions tagged airline-operations regulations cold-weather deice or ask your own question.

19
Why do aircraft with turboprop engine have black painted anti-icing system?

21
Is deicing fluid harmful to the environment?
2
Is there a source of deicing holdover time tables?
3
Which aerodromes are in the scope of ICAO recommendations?
32
Do airline pilots use this high-speed, high-drag technique for losing altitude?
10
Do Federal Regulations really require compliance with all crewmember instructions?
4
How is the type of deicing fluid chosen and how much time is required for application?
3
When do pilots facing bad weather turn back (U-turn)?
7
How do insurers apportion responsibility when airliners collide on runways or taxiways?