How is minimum runway length related to V1?

2) If it is used to determine the minimum runway length, and for example we have a runway of 8000 ft and my airplane's accelerate stop distance required (ASDR) is 4000 ft and takeoff distance required (TODR) is 5000 ft, can my $V_1$ be as low as 15 kts? Since (let's say) below 15 kts, of course you will have the 4000 ft required to stop and also have enough distance to takeoff with 1 engine inoperative.

The “FAR” Takeoff Field Length determined from the FAA Approved Airplane Flight Manual (AFM) considers the most limiting of each of the following three criteria:

115% of the actual distance required to accelerate, liftoff and reach a point 35 feet above the runway with all engines operating:

The distance required to accelerate with all engines operating, have one engine fail at $V_{EF}$ at least one second before $V_1$, continue the takeoff, liftoff and reach a point 35 feet above the runway surface at $V_2$ speed:

The distance required to accelerate with all engines operating, have an engine failure or some other event at $V_{EVENT}$ at least one second before $V_1$, recognize the event, reconfigure for stopping and bring the airplane to a stop using maximum wheel braking with the speed brakes extended.

$V_1$ is the speed chosen by the manufacturer as "the pilot’s initiation of the first action to stop the airplane during the accelerate-stop tests." Note that this is particularly important in that it is not a takeoff decision speed as some pilots like to think of it. The decision must have been made prior to $V_1$ so that there is time to react by $V_1$.

This speed is chosen by the manufacturer and must be between the engine failure speed1 and rotation speed. Within this range, they could choose any speed, but typically they choose the speed which gives a balanced field length (see next section).

There are also other factors to consider such as the maximum brake energy limit ($V_{MBE}$) which will prevent $V_1$ from being too high.

If we takeoff from a fixed length runway (like, say one that matches the Takeoff Field Length from above), changing the $V_1$ speed will affect the weight that we can successfully continue the takeoff or abort within the available runway. 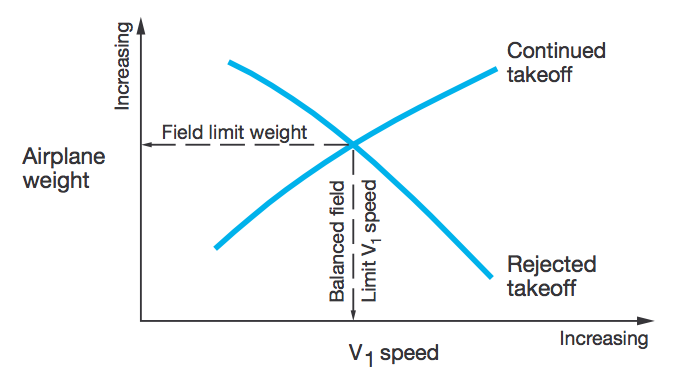 This is nice because it gives the pilot one important number to remember instead of different stop/continue $V_1$'s.

If they were to choose an extremely low $V_1$ as in your question, then it would require considerably more runway in order to continue the takeoff than if it were higher, and it would not be balanced. Some AFM's do include separate charts for accelerate-go and accelerate-stop though so you could figure out exactly how much runway that you would need if the engine failed at a lower airspeed.

The regulatory information for takeoff performance on transport category aircraft is listed in 14 CFR Part 25, Subpart B, Performance, 25.101 - 25.113.

An easier to read document is the FAA's Pilot Guide to Takeoff Safety which covers this and a lot more. Much of my answer was taken directly from this document, and I would highly recommend anyone that is flying a multi-engine aircraft to read the entire thing.

1 $V_{EF}$ itself must be above the minimum controllable airspeed on the ground plus acceleration while the pilot reacts to the engine failure.

Just to make sure we're on the same page, I'll reiterate what should be obvious: $V_1$ is a speed at which you may stop in the available runway space or continue the takeoff.

In theory, $V_1$ could be any speed that matches this criteria -- it is not necessarily one speed. However, in practice we refer to a few different $V_1$ speeds:

The reason why $V_1$ cannot be greater than $V_R$ is that you're already or about to be in the air. If you attempt to stop the aircraft rotating, you might be too aggressive and destroy the aircraft by tring to force the airplane down during or after rotation.

You also can't have a $V_1$ of something like 15 knots, as it may not be below $V_{MCG}$. If you did continue with full thrust on one engine at 15 knots, you would not have enough authority from the rudder to prevent the aircraft going off the edge of the runway, which is extremely dangerous. This is even more of an issue if you decide to continue the takeoff at $V_1$, which would almost certainly result in a runway excursion. Typical $V_{MCG}$ values for airliners can be above 100 knots, making your proposed situation impossible.

For all cases, using the balanced $V_1$ provides the minimum runway distance required, though company policy may require using a reduced $V_1$.

Not the answer you're looking for? Browse other questions tagged aircraft-performance v-speeds or ask your own question.

4
Why does V1 increase with weight?
0
What is the significance of the V1 ground roll of an aircraft?
37
What do jet pilots say during the takeoff as they are speeding down the runway?
10
Why is the main landing gear of the Cessna Caravan placed so far forward?
12
Can a Boeing 747 take off fully loaded on 3 engines?
12
How can V1 and VR (rotate) speeds be calculated?
8
Could an aircraft like a Boeing 777 take off with flaps fully deployed?
5
What's the pilot's typical reaction time to co-pilot's callouts?
3
Is it possible to have V1 greater then Vr?
6
In Raymer diagram "Take off parameter- Take off distance", what is the difference among "balanced field length", "over 50 ft", "ground roll"?
See more linked questions

6
Why is the minimum runway length non-linear in relation to the landing weight?
3
Is it possible to have V1 greater then Vr?
20
Why is the takeoff decision point based only on speed and not time or distance?
6
Under which conditions is full rated power instead of METO power required for takeoff (DC-3/C-47 with Pratt&Whitney 1830 twin wasp engines)?
2
Is reducing V1 a viable option for pilots when the ASDA is shorter than the ASDR?
1
Is it a common airline practice to base T/O speeds on the actual T/O weight when an assumed temp thrust is used?
1
For what is VMCL the minimum control speed?
6
Why not separate out the two definitions of V-1 into two separate Vspeeds?
4
Are there any aircraft where minimum-V1 is limited by Vmcg?
3
How does fuel economy quantitatively depend on altitude for a jet?