Are aircraft with squirrel cage fans as wings viable? [duplicate]

I'm having trouble finding it, but a few years back I saw a YouTube video where a gentleman had designed and built an aircraft that used what I can only describe as squirrel cage fans for the upper surface of the wings. As far as I recall he made some bold claims about how efficient and capable this design was.

I was skeptical at the time and haven't seen this design since my original viewing of the video.

Unfortunately, I can only speak for MAV design, but the lab I work in at the University of Maryland (UMD) has done some work on a similar design called a cyclorotor. Here's a paper that might have some information for you (https://www.researchgate.net/publication/301680815_Development_of_a_quad_cycloidal-rotor_unmanned_aerial_vehicle?ev=prf_pub), but I'll try to sum up here.

The neat thing about these aircraft is that you have, in theory, a very efficient and simple rotor system. Instead of a rotor blade where only the outer portion of the blade is moving at a desirable speed, the entire blade is moving as fast as you want it. Similarly, instead of the complexity of a swashplate and needing to actually tilt a rotor in the direction you wish to travel, you can actuate the pitch of each blade in a cyclorotor arrangement with respect to its location in its rotation (analogous to cyclic blade control) and generate a thrust vector in virtually whatever direction you want...all without tilting the aircraft's body. I've copied a figure from the paper I linked to illustrate this: 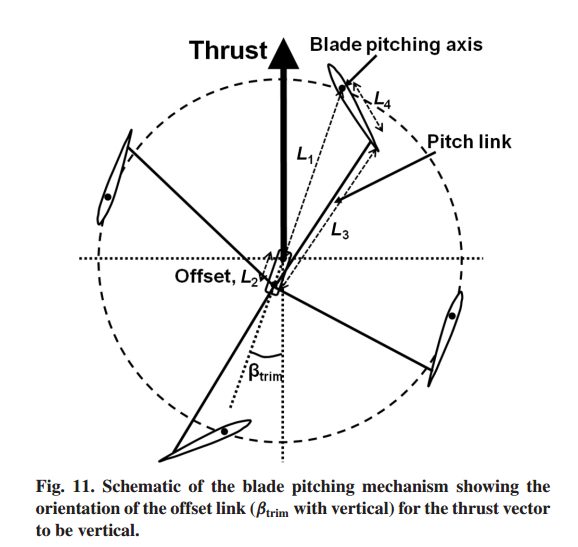 In this image, you have 4 blades rotating around on a drum. It's not quite the "squirrel cage", but similar. Each blade is allowed to pitch, as on a Ferris wheel, as it spins around. To govern this pitching, each blade is attached to an offset bar near the center of the drum's rotation. Hence, as the blades spin around the drum, their pitch is passively modified, forcing them to generate thrust in a particular direction. Change the orientation of the offset bar, and the cyclic pitch of the blades changes accordingly, thus modifying the direction of the thrust vector...all without changes the vehicle's flight attitude. For reference, a helicopter has to tilt over in whatever direction it wants to go (generally speaking), increasing drag area and, based on rotor dynamics as well, limiting its response time. Plus, it could be handy to keep a stable, level platform that can still move around (say for filming or something like that). It is a really neat feature to have.

The paper is likewise optimistic about the efficiency of the design. However, measuring efficiency is a VERY tricky thing to do in a way that you can truly compare two designs. For example, disc loading is typically measured on a helicopter as the gross weight of the aircraft divided by the rotor disc area. On a cyclorotor, if you want to compare on that metric...what is the disc area? The paper utilizes the projected area of the cycloidal rotor (the "drum", if you will, the forms the fan wing concept). Some argue that utilizing that doesn't give you a true apples-to-apples metric to compare with because well...how IS that projected area and the weight it lifts necessarily comparable to a single-rotor helicopter's disc? Even for coaxial helicopters, I've heard substantial arguments about how to best reduce a coaxial rotor system to a single rotor system for a true apples-to-apples comparison...and I'm not sure you could find one that involves disc loading for this present case of the cyclorotor.

Power loading (gross weight divided by installed power, so the higher the quotient, the better hover efficiency you have -- more weight for less power) seems like the go-to metric then, since it has less "wiggle room", per se. However, now that you have that, how do you still say that two helicopters at a given power loading are better or worse than each other? Power loading doesn't capture everything (only hover efficiency), so an additional parameter is necessary. What is being held constant between the two designs that gives a basis to say whether or not a given design is actually more efficient than another? In the UMD paper I've linked to here, it posits disc loading...which, as said, may be a questionable way to do that. These are the two of the "go-to" parameters of helicopter performance, so we might need to make something new.

Hence, I think that the best answer that I have is that the design is still being felt out, and I'd be wary of people who posit massive efficiency increases. There is no free lunch, and efficiency is a tricky thing to nail down. I've seen more CAD of fan-wing designs than I have vehicles (at least, for those larger than the MAV scale), so I'm inclined that think it's not living up to expectations for the larger vehicles, but that's pure opinion. Also, this said, I know of at least 5 of these vehicles that have been made and flown at UMD, though none over 10 pounds gross weight.

62
What are the advantages of a Spinning Wing (Magnus Effect) and why haven't any been commercially produced?

4
Why aren't Rogallo wings or parafoils used in aircraft with fuselages?
18
Why are there so few aircraft that had inhabited wings?
0
Are aircraft wings airtight?
6
What are the limitations to adding wings with engines to a helicopter?
9
Can "a drone" damage the wing of "an aeroplane" to the extent it actually threatens its ability to fly?
2
Why are smaller wings in the front with these VTOL aircraft?
4
Would this be a dangerous impeller to use for a drone?
3
Are virtual winglets a viable concept?
1
How heavy are modern cantilever monoplane wings?